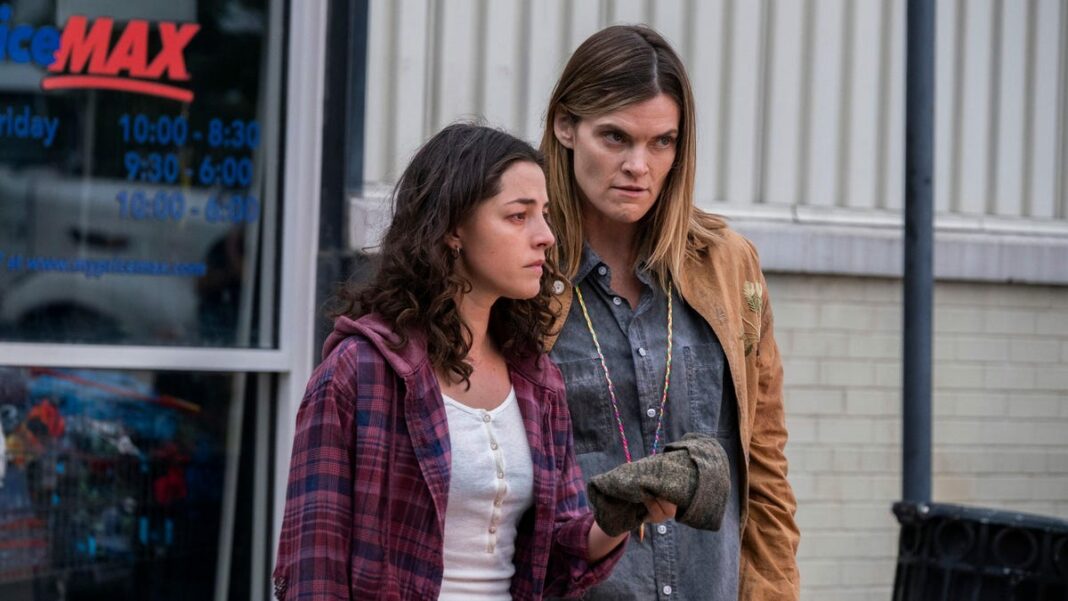 I’ll gladly acknowledge it since I’m an adult who can admit when she’s wrong. Wow, was I completely wrong about Roxanne. So, so, so wrong. In fact, I think it’s safe to say that after this week, one could go through the rest of what I said a few weeks ago about Roxanne being Victoria 2.0 and do a clean find-and-replace, substituting Roxanne for Victoria in every description. Roxanne, not Victoria, is the one who has been clinging to old-world concepts about a common enemy all this time.

We never see the weak, Kohl’s-sale-rack-wearing lady Roxanne has embodied for 45 years slip through the gaps in Detective Roxanne Benson’s facade. (How did she learn to shoot, much less well enough to instruct a group of twenty-somethings?) Isn’t it true that the only option is to watch television?) Is it possible Missi Pyle is simply a better actress than she deserves? Roxanne would have been an actress if she had been that brilliant at changing her entire personality. At the very least, she’d have gotten some traction with her sleazy boss.

Perhaps murdering numerous strangers to defend your Caucasian Price is a better option. Max has a greater impact on a person than I had previously imagined. This episode, written by Coleman Herbert, uses the challenging but effective strategy of walking backward through one of the show’s big revelations: How did Roxanne manage to pull off such a massive heist? Let’s rehash in typical chronological order for those who missed the discussion.

To begin with, the majority of Roxanne’s stories were accurate. She was diagnosed with breast cancer. Eddie, her husband, did physically and financially abandon her. When she (presumably) notified her (teenage) female coworker that their male coworkers were objectifying her behind her back, she was (probably) advised to mind her own business. Her PriceMax supervisor, the manager, slaps a male employee on the wrist for overt sexual harassment, then threatens to fire her — a recent cancer survivor — for shoplifting a bargain-bin season of Law & Order when she complains.

She hangs out in her warehouse after the Event; at one point, two women with firearms barge in and shoot each other before noticing her. Roxanne has already snatched a Glock off the first two and fired before she gets into the entryway when a third armed lady bursts in, thinking she’s found refuge. Whether or not the fourth woman was armed was beside the point, according to Roxanne’s expression.

A horse emerges later as she attempts to burn the remains in the parking lot; as she approaches, it leads her home to St. Anne’s. She hurries back to the PriceMax, drags rugs over the bloodstains, removes a pistol holster from a display, and snatches the gun and badge from a state trooper’s decaying body parked outside, inspired by all the impressionable young women she encounters there. She manages to get the cop car 80% into the neighboring river, decides that’s good enough, and leaves her PriceMax vest in the car with the body. (She does, in fact, drop her name tag on the evidence.)

She entices her new followers back to the store, where she sells the majority of them her schtick, by fabricating a circumstance in which shots fired (by her) led Detective Roxanne to their home in pursuit of the (nonexistent) shooters. Kate, the only survivor in the gang who shows even a smidgeon of suspicion for officers, eventually discovers her true identity. Roxanne shoots her in the back when she tries to leave, then goes back to the PriceMax, crying wolf once more.

Although these aren’t quite supervillain schemes, her victims have all been fragile, damaged women in dire need of a new perspective. The Daughters of the Amazons — or, as they’ve been dubbed this week, the Daughters of the Amazons — have taken on a life of their own. I previously wrote about Roxanne’s cult followers joyfully bolstering her authority as a cult leader, but that wasn’t quite accurate. Regardless of who is in power, they’ve been building up the rules of their own groupthink. Due to the destructive relationship models that many of these women were accustomed to, this cult has grown naturally in isolation to represent the countless cults that have come before them.

The following is a recipe for attracting new members:

So, when Sam confronts the Hero she really is — the one who lives in the same universe as her many crimes, but whom he loves fiercely regardless of the mess — she blames him of holding her back. New Hero is a natural, whereas Sam is “not a gun man.” Sam refers to commitments that the Old Hero does not wish to keep and that the New Hero is not obligated to honor. Worst of all, Sam is changing into a new, if not entirely new, person. When it suited Old Hero, he’s not the constant, back-pocket mainstay she could indulge in without consequence.

What Sam provides — with devastating honesty; Elliot Fletcher, just rip my heart out — is reality, imperfect as it is, and, honestly, it’s a far better deal than she’s earned. As a result, she turns away from the far more dazzling New Hero that everyone else claims she is. The one who was luring her to the cliffs like a siren.

There’s just one person in this new universe, and she’s on her way up. Nora is responsible for the evolution that I previously attributed to Roxanne — that new, honed insight into how power is consolidated in this new environment. Nora, who has had her hair red and wavy the entire time. Nora, who has been wearing a green khaki jacket the entire time. Nora, who may have been a prime candidate for cult membership in the past, but who is considerably better positioned for leadership in this new age – where old rules no longer apply and existing demagogues are notoriously lousy at disguising their tracks. (At the very least, she isn’t a chess master.)

And maybe none of this would have happened if Roxanne had just realized how precious she might be to her. Instead of accusing her of being “mad” and “not our people,” she could have welcomed her and Mack into the fold. Roxanne may have identified her as a possible competition on some level. In any event, Nora’s rejection, along with similar rejections from Sam, Hero, and even her own daughter, who, in classic tween form, blames her mother for depriving her of this paradise, pushes her over the brink.

It’s a classic origin myth for a villain: After being snubbed one too many times, a perennially undervalued, overlooked brilliance sours into something darker. Unlike Roxanne, this former presidential aide excels in making sabotage appear to be an accident; a fire started by youthful, inebriated carelessness. Despite the increasingly visible friction between Roxanne and Sam, her supply hoarding goes unreported. She only needs a little leverage – that cop car, that name badge — and she’ll be on top in no time.

For the time being, she’ll settle for becoming a Littlefinger, a Grima Wormtongue, giving Roxanne the limelight she craves while puppeteering in the shadows. It’s a really good bargain, and Roxanne — who is now looking a lot smaller — would have to be a complete moron to turn it down. “The only thing that will keep you safe out there are numbers,” Nora says calmly, illustrating how much more suited she is for this position in one conversation. “You don’t need the structure.” You’ll need personnel. But you’ll need more than ‘Men stink’ to maintain them.” Dear Leader Nora might just be the appropriate kind of ruler for the job, arriving at a time when doubling down on spite and denying people basic needs is proven to be a bad way to sustain supremacy.

Previous articleBattlefield 2042 Report: Troubled Development And Attempts To Copy Call of Duty
Next articleRelease Of “Elden Ring” Video Game Is Delayed By A Month

What is Known About the “Bonus Episode” of “The Sandman”