Dr. Allison Mann would be an outcast in another universe, on another timeline. An enigmatic weirdo genius archetype, a mad scientist we don’t understand but must have, an expositional means to a narrative end.

She is all of us in this world – on this timeframe.

Of course, we lowly plebes aren’t cognitively comparable. Allison, played immaculately by Diana Bang, is a prodigy who, given enough time and finances, will undoubtedly be able and willing to clone human beings. But, in light of how we’ve lived the previous two years, everything else about her — everything that made her unpleasant, arcane, or fringe-y in the comics — feels so much more… grokkable.

Her abandoned apartment is a dirtbag’s palace, with finished Rubik’s cubes, mounds of papers, crusty mugs of dried-up coffee, and rotting strawberries thrown around like paperweights. (Perhaps a scumbag’s palace, or just a flat in the middle of quarantine.) She’s written on group plaques with Post-It notes. It expresses her true feelings toward her coworkers. She’s drawn dicks on all the male alumni’s group photos at the Union Club, the real guys’ club (completely fictional, and in no way related to the genuine Harvard Club) where she used to squat and now squats.

Her genuine demeanor could be classified as on the spectrum once 355 and a mildly stabbed Yorick have identified themselves. She thinks a “thank you” would make her refusal to return to Washington stick; she segues abruptly and conversationally to warn Yorick that he’s bleeding; she waits on the stairs like a poltergeist while 355 dashes out to “find a working satphone,” leaving Yorick grasping for straws (more on that in a second). And she has no tolerance or tact, treating Yorick as if he’s suddenly become a priceless specimen, despite the fact that he’s her least favorite undergrad gen ed student. (“Reproductively interesting” is the closest she’ll ever come to a compliment.)

But the point is, as she reframes everything that’s happened in their universe, her reaction feels like the most acceptable we’ve seen thus far. She sounds a lot like the climate scientists, epidemiologists, and political watchdogs who have been warning us about our current state of affairs for years, a voice of reason that was previously dismissed but is now the last ray of sanity in the midst of chaos. Whereas the world of normies previously held her potential hostage, the tables have now flipped, and her brand of ruthless, efficient intensity now reigns supreme.

Her assertions are ruthless and unmistakable: Boston’s “resistance” against a historically machiavellian administration that now tear-gasses them every 30 minutes is neither crazy nor fringe. Bringing back males is an absurdly reductive concept that ignores the deaths of millions of non-men. (Given her focus on this, the chances are good that the spouse she’s not mentioning has androgen insensitivity syndrome – either that, or it has something to do with the non-baby.) I’m hoping the solution to the crib riddle isn’t as bizarre as it appears in the comics.) Environmentally, the world is disintegrating. There’s no escaping these conditions, and there’s no compromise on what she needs to find a solution to just one of the many crises that are currently unfolding. When the planet is literally dying, who has time for tact?

Yorick, on the other hand, is taking her hard realities quite well, given his market nonsense. 355’s much-needed chastisement last week appears to have hit home; when he speaks to her now, he’s not just frightened, but also aware of what he’s saying.“Wait, what was I going to say? As she goes to bluff her way past Harvard’s new military fortifications, he asks Ampersand, “She’s never given me a knife before!” When 355 returns from her clearly fraudulent outing, the way he presses into her personal space to investigate a cut on her face is also unusual.

It’s almost as if getting over yourself makes you a better, more observant (if still painfully cishet) friend, especially when combined with his perplexingly compassionate experience with the protesters, who assume he’s trans and offer him unqualified help, and his genuine concern for Allison’s deeper-than-science sadness.

355 has improved and deteriorated, which is probably par for the course when you’re deprogramming from a government-sanctioned ghost-spy cult on your own. On the one hand, she and Yorick have developed a charming, though subtle, friendship. (In general, the on-screen chemistry between Ashley Romans, Ben Schnetzer, and Diana Bang is quick and warm.) That conversation, for example, is proceeding at a Neil Simon-like pace. 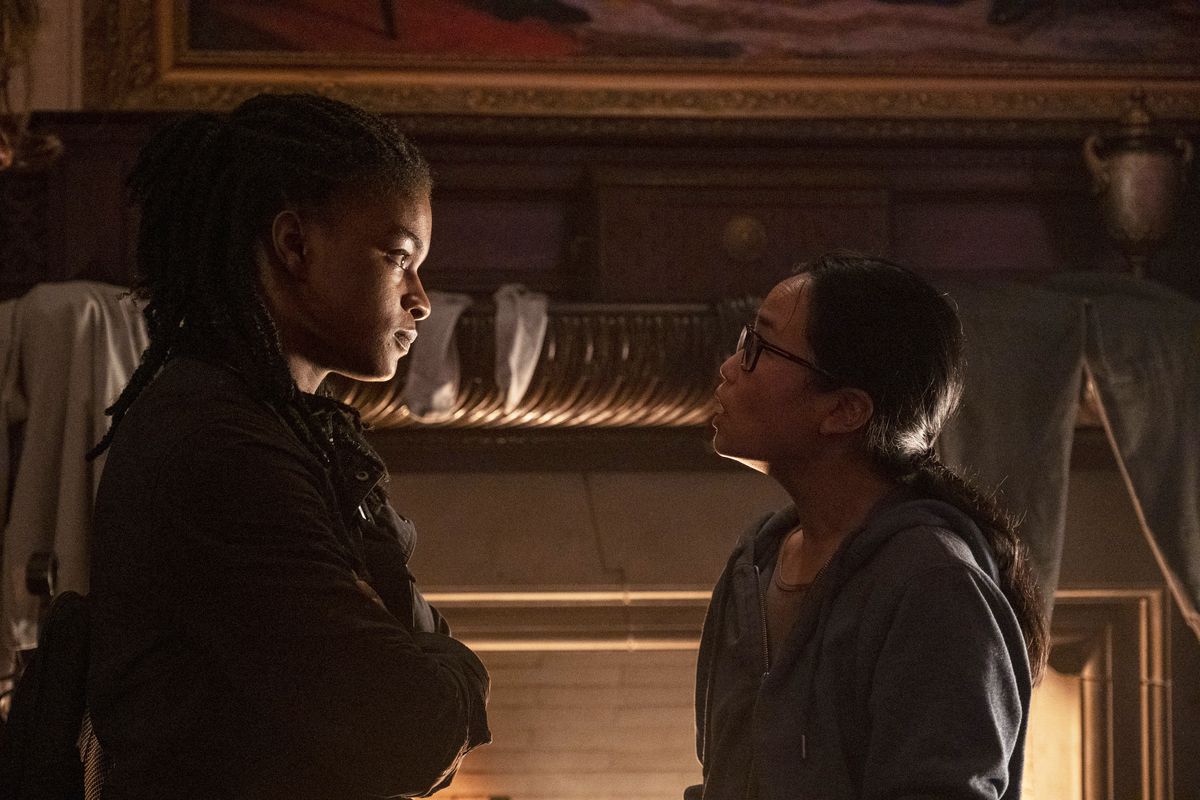 When 355 and Allison go head-to-head, they don’t have to say much to convey that 355 doesn’t like being the second-smartest person in the room, that Allison doesn’t care that 355 could kill her in a second and that Yorick has suddenly become the odd man out of this very competent, very queer triangle.)

On the other hand, 355 is clinging a little too tightly to her training, which is more accurately defined as Hero Brown territory. She’s very comfortable undermining resources to suit her aims, noble or not – first the helicopters, now the sat phone. Her legitimate childhood trust issues — from whatever lonely, abandoned place they arise — were exacerbated on purpose when she was recruited and brainwashed into the Culper Ring, as her hidden side quest and a run-in with Homicidal Peter Pan Actress 525 demonstrate.

Sure, she’ll be able to exist in this world if she’s completely self-sufficient, but she’s now acting like herself. There will be no more assignments to flounce to after this; this time, when she pushes everyone away and declares it her work, it will be for good.

That reckoning may come sooner rather than later, given that the president is having second thoughts about entrusting her only son, the last cis man on the planet, to a rogue spy. With the return of Q Anon Queen Regina Oliver, she has her hands full, on top of the mounting national dissatisfaction and needs for information. In every way, she is an alt-right viper, a void of rationality mixed with a deadly political cunning that has seen right through Brown’s plan to elevate the “rightful” president to a cabinet position.

(How Brown’s administration resembles socialism — or could if it wanted to — defies logic, but that won’t stop Oliver from turning vacuous words into a lethal weapon.)

Meanwhile, Kimberly’s alliance completes an especially fortunate day for her. The former First Daughter has amassed incredible power in a matter of hours: not only has she negotiated a deal with a powerful extremist whom she despises, but she’s also unwittingly gained leverage over the only other person who knows about Yorick — Brown’s aide Christine, who is secretly pregnant. This week at the OBGYN, Amber Tamblyn delivers another spine-chilling scene, as she carefully manufactured mom-friend facade crumbles, revealing the self-interested political animal beneath.

As the doctor pronounces the fetus alive, we can see the shift in her eyes; no matter what Christine wants or feels, she’s no longer a person to feel good about aiding. She’s simply a womb now. Also, it’s a tool.