While the live-action Y: The Last Man series is set to premiere on FX on Hulu shortly, the iconic Vertigo comic still leaves a lot of unanswered mysteries.

One significant narrative strand in Y: The Last Man has to do with discovering the true source of the sickness that killed everyone on Earth with a Y chromosome, as with every post-apocalyptic fiction including viruses, plagues, or anything else that almost wiped mankind out.

Several possible causes for the mass casualty catastrophe were suggested, but none were ever proven throughout the course of the comic’s 60 issues. So, before FX on Hulu brings Y: The Last Man to life, let’s take a deeper look at some of the causes for the extinction catastrophe presented. 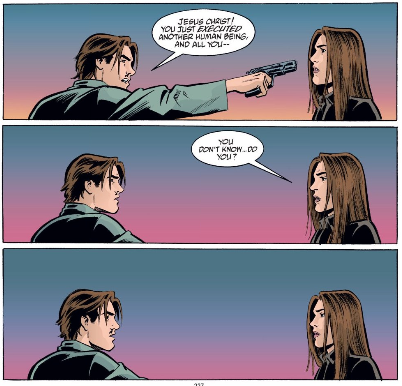 The first half of the tale revolved upon America’s Agent 355 stealing a relic from Jordan, a magical amulet. However, religious fanatics told her that removing it from the Middle Eastern country would spread a global plague. This was believed to be retaliation for men taking Helen of Troy in the past, but 355 did it nonetheless to prevent it from slipping into the hands of terrorists.

The world plunged into turmoil when she crossed borders, prompting admirers to wonder whether this was true. Yorick acquired a ring from a magical goods trader to propose to his love, Beth, who was studying in Australia at the time, which led him to believe that the ring was responsible for his survival. All of these baubles, however, would become irrelevant later in the story, with even Yorick and 355 mocking the beliefs.

Israeli assassins, headed by a military general named Alter, were on the lookout for Yorick. She’d say she needed him because he was part of a larger component in a potential world war. She admitted that the Culper Ring, a covert American military organization that employed operatives like 355, created a unique nerve gas to destroy China’s economy.

The US sought to stifle China’s population and rise as a world power in the series, but the chemical strike backfired, with the poison killing males all over the world. Alter was sure that Yorick’s DNA made him invincible, but she got lost along the road, wishing him dead to put an end to the internal conflict she was fighting. Vaughn claimed that this was the official cause in his screenplays for the series, although this was never verified in the comic itself.

Yorick was brought to Allison, a scientist researching on cloning, at one time in order to outshine her father, Matsumori. When they finally tracked down her mother, she proposed a different theory: that playing god enraged nature. She said that when her husband created Allison’s first clone, something in nature was activated because men were no longer required to generate life.

They just died out when Mother Nature thought men had become outdated, similar to The Happening. It was ludicrous and didn’t explain Yorick and Ampersand, though Allison did discover that Ampersand’s excrement contained unique compounds that rendered the capuchin and Yorick invulnerable. When they discovered Matsumori, he added a fresh twist to the story, claiming that the poison he used to kill Allison’s clone inside her stomach mutated, and nature chose to kill all men as a result.

Yorick, 355, and Allison would encounter so many zealots and conspiracy theorists that they would come up with a slew of theories to explain the outbreak. Several Christians believed this was the Rapture, in which God smote men down for the Bible’s initial sin; whereas some Aboriginal Australians informed Beth that this was also a heavenly move.

Other terrorists said it was a government cover-up to allow the elites to reduce the population, while the “Fish & Bicycle” touring theatrical group believed it was because women had been repressed and excluded from the performing arts. Yorick’s crew never took any of these suggestions seriously, even if some of them could not be completely dismissed.

Closer Look at Helmet of Dreams from “The Sandman”