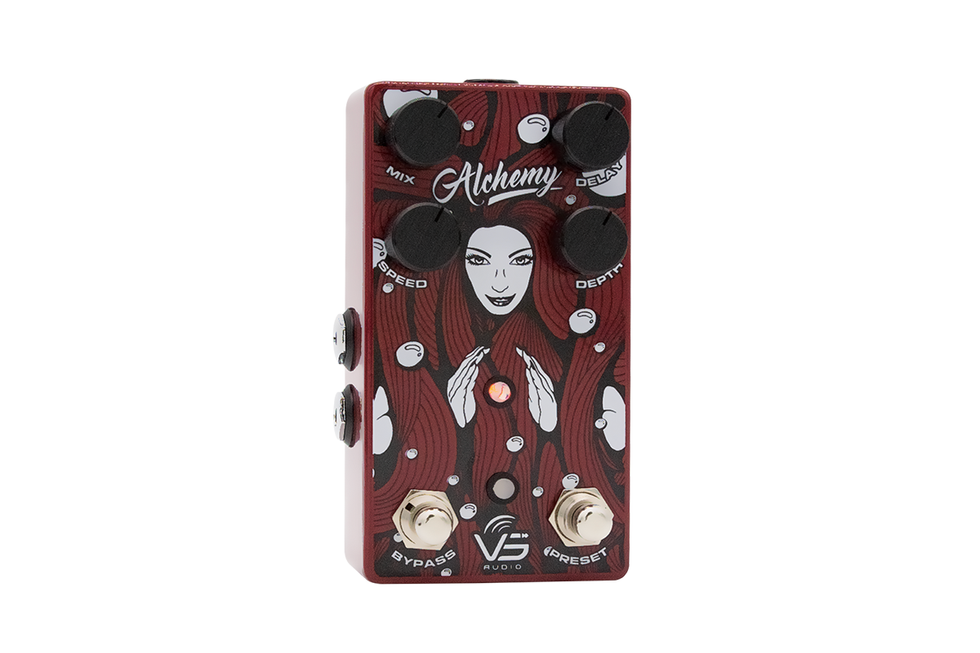 Love it or hate it, the chorus pedal became an important part of rock’s soundscape in the ’80s. Happily, there’s a lot to love about VS Audio’s new Alchemy MkII, an analog stereo chorus with a half-dozen useful presets and a 4-dial setup that opens up plenty of modulation-shaping range.

With graphics that conjure a medium with her hands surrounding a crystal ball (which doubles as the bypass LED), the updated Alchemy pedal is handsome and sturdy. It’s got two smooth switches. The leftmost, labeled bypass, is on/off; the rightmost activates and shuttles between the device’s six presets and works as a tap tempo for the low frequency oscillator (LFO) that governs the pedal’s sweep. Tap tempo is a new feature in the MkII, along with smoother and more natural sounding modulation and an expanded delay range. Also, VS says the effect’s output is brighter, smoother, and warmer than in the first iteration. The input and stereo outs are solid, and a barrel adaptor feeds the Alchemy 9-volt power. Under the hood, there’s a tidy circuit board with a reissue 3207 BBD delay chip that helps produce everything from warm modulation to queasy detuned noise. Together it’s a rugged, appealing package.

The Alchemy MkII comes with six factory presets that sound so good and varied that players who aren’t interested in exploring outer reaches might be satisfied with them alone. By holding the bypass and preset switches down simultaneously, it’s also easy to edit those presets.

Six factory presets sound so good and varied that players who aren’t interested in exploring outer reaches might be satisfied with them alone.

I explored the Alchemy MkII with a two-amp setup featuring a Carr Vincent and Carr Telstar so I could enjoy the stereo spectrum. And exploring the presets in this configuration was a joy. The box’s lower LED changes color according to preset. Here’s what I heard for each color-coded setting. I also describe some of the virtual knob settings as they are described in the manual:

In live mode, sans presets, the chorus options feel pretty endless. I explored a few go-to settings, like setting speed and depth at 3 o’clock for Nirvana or “Enter Sandman” tones, and slowly increasing the delay until it produced a sick, detuned quality. Elsewhere, with the speed at 11 o’clock, depth at noonish, and delay at 9 to 11 o’clock, I could approximate 12-string sounds.

At 300 bucks the Alchemy Mk II is pricey. But it is a well-built, rangeful stereo chorus with varied and thoughtful preset options that might be enough for many players. Controllability on the fly can be tricky. Dial positions are indicated by divots, rather than a contrasting white line, so it’s hard to see them in low light. Apart from that design oversight, the Alchemy is feast of rich, analog modulation sounds.

The Best Marvel Games Of All Time