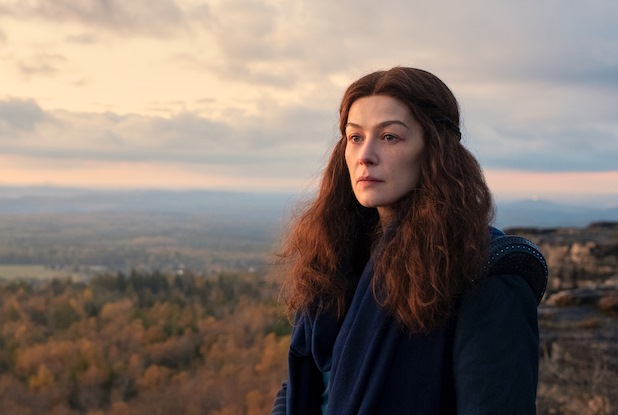 The Wheel of Time on Amazon Prime strikes a good balance between engrossing storytelling and revealing a vast fantasy universe, however viewers will have to go through a pretty bland first episode before it really gets going. The long-awaited adaptation of a series of best-selling fantasy books by Robert Jordan, which has a fan base and following roughly comparable to George R.R. Martin’s A Song of Ice and Fire novels, which launched HBO’s once-popular Game of Thrones TV series, is now available on Amazon Prime.

The Wheel of Time’s idea begins with the show’s title, which alludes to a cosmic cycle of reincarnation and prophecy that has an impact on the globe. “The Dragon,” a great soul who has fought the Dark One, a cosmic power of evil, throughout numerous times, is maybe the most important figure in this universe. The Dragon imprisoned the Dark One in a magical prison during the previous age, but at a heavy cost. The Dark One poisoned the supply of magic used by male channelers (the show’s word for magic users), driving them insane and nearly destroying the world in the process.

The mysterious Aes Sedai Moiraine (played by Rosamund Pike) journeys to the distant region of Two Rivers with her Warder Lan (Daniel Henney) to fulfill a terrible prophecy at the start of the series. The Dragon’s rebirth 20 years ago foreshadowed the coming Final Battle between the Dark One and the Light’s soldiers.
According to the prophecy, the Dragon Reborn will either save or destroy the planet.
Sheepherder Rand, blacksmith Perrin, scallywag Mat, and innkeeper’s daughter Egwene are four “Ta’veren” (those who have some form of significant destiny ahead of them) Moiraine swiftly recognizes as possible candidates.
The local Wisdom Nynaeve is later identified as a possible Dragon Reborn. Moiraine guides them on an epic trek across the world to guide them to safety and possibly destroy the forces of darkness as the Dark One’s armies attack their town.
Despite having an immense universe with complicated politics and a lot of characters whose desires and aims pit them against one other despite being on the same side, many people consider The Wheel of Time book series to be “generic” fantasy. This is partly due to the series’ opening pages, which are a conscious homage to The Fellowship of the Ring’s beginning. While the series immediately diverges, that “generic” opening sequence is one of the series’ biggest flaws, since it horribly fails to illustrate why The Wheel of Time is so beloved by so many people.
Fortunately, showrunner Rafe Judkins is a self-proclaimed Jordan fan, and he correctly chooses to focus on what sets The Wheel of Time apart from other fantasy franchises. While the show spends time getting to know the main cast, it correctly chooses to devote more time to Moiraine and her Warder Lan, as well as the mysterious Aes Sedai organization as a whole. The Aes Sedai not only reflects what makes The Wheel of Time unique (women wield tremendous power), but it also highlights the first complications that will draw viewers into the show.
Even while Judkins enjoys the books, he isn’t completely devoted to the source material. In practically every episode, new wrinkles are introduced, either to add a splash of drama to the show or to help set up future story cycles or characters who will play a larger role later in the series. It’ll be interesting to see which secondary characters receive the focus and which ones are left out; I expect the exclusions and story-driven slights to cause a lot of drama among book lovers, but they make sense in the context of the show and in trying to construct a story that appeals to newbies.
Pike, Henney, and Robins are among the early standouts. In the books, the trio has a complicated relationship, and many of the best scenes from the six episodes we watched feature one or more of them. Thom Merrilin, played by Alexandre Willaume, is a joy to watch, as is Loial, played by Hammed Animashaun, and Abdul Salis, who plays the deliciously nasty Eamon Valda, one of the few human threats portrayed in the early episodes of the show.
Aside from the weak introduction, The Wheel of Time’s major problem is how inadequately defined the Dark One and his forces are. While some of this is attributable to the source material, the show does little to distinguish the Dark One from a Sauron or a generic bad villain from any other fantasy genre. There are a handful of clumsy exposition dumps that may lead casual viewers’ eyes to glaze over, but considering the breadth and complexity of the volumes, this is a necessary evil.
The Wheel of Time is a fun film to watch and a good adaptation of the books that should please fans of the books. The show may fail to stand out among other high-profile fantasy series for some viewers. The Wheel of Time has a darker tone than Netflix’s The Witcher (albeit it has greater spectacular effects and scripting) and lacks the surprising turns of Game of Thrones, but it still shines brilliantly when it draws on its cast’s strong performances and the distinctive characteristics of its world. I’m not sure if The Wheel of Time will reach the same pop-culture heights as the other two series, but any fantasy aficionado should make it a point to see it.
Share
Facebook
Twitter
Pinterest
Linkedin
ReddIt
Mix