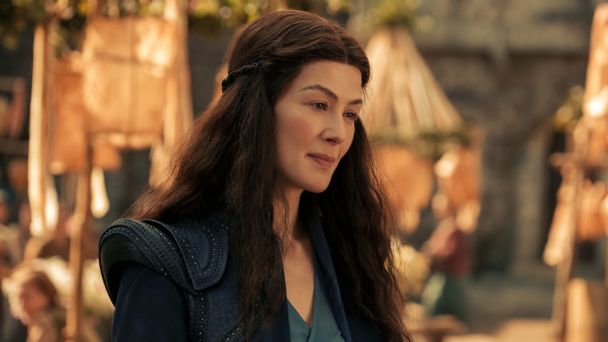 The “Wheel of Time” has released a new video, which shows Rosamund Pike’s journey as the series’ guide in her search for the Dragon Reborn. The “Wheel of Time”, based on Robert Jordan’s 14-book fantasy series, depicts an epic conflict between good and evil set in a world guarded by the Aes Sedai, an all-female organization of magic wielders who fight The Dark One. Since J.R.R. Tolkien’s Lord of the Rings, the bestselling saga is regarded as one of the most successful series. On November 19, the Amazon Prime Video adaption will premiere.

Moiraine Damodred, played by Pike, is a member of the Aes Sedai who embarks on a quest to find five young people who she believes are destined to save the world. This rescuer, known as the Dragon Reborn, is said to be the one who will destroy The Dark One and his wicked armies. Madeleine Madden, Marcus Rutherford, Barney Harris, Zo Robins, and Josha Stradowski are among the show’s youngest cast members. The “Wheel of Time” will include eight episodes, and a second season has already been announced.

Amazon released a new teaser for The “Wheel of Time” on Friday, focusing on Moiraine’s quest and how it sets the tone for the epic series. The film starts with Pike’s introduction, with the actress telling the backstory to the Dragon Reborn prophecy. She reveals that she first learned about “the vision of a baby being born” 20 years ago. Moiraine embarks on a big trip throughout the world in pursuit of the promised savior, as the clip proceeds to describe the series’ lore. Pike asks, “Who is the Dragon Reborn?” as the faces of the five young cast members flash across the screen. Below is a link to the new trailer:

With less than a month until The “Wheel of Time” premieres on Amazon, the fantasy series is generating a lot of buzzes. The new teaser emphasizes Pike’s incredible presence, as well as the show’s magnificent imagery and dramatic effects, which were originally hinted at in the first official trailer for The “Wheel of Time”. Fans of the literature are anxiously anticipating the film adaptation of the fabled quest. The series’ early teasers provide a glimpse into Jordan’s enormous story for those who are unfamiliar with it.

The prophecy regarding the Dragon Reborn is the backbone of The “Wheel of Time”, and while the story of the promised one isn’t new in the fantasy genre, it is the backbone of “The Wheel of Time”. The upcoming series is ready to fill the vacuum left by Game of Thrones, thanks to its big-budget production. Amazon is also developing a new Lord of the Rings series, which will premiere in the second half of 2022. When the Game of Thrones prequel premieres early next year, these two shows will compete with HBO’s House of the Dragon. “The Wheel of Time” has already been renewed for a second season, indicating that it intends to be in the game for a long time.