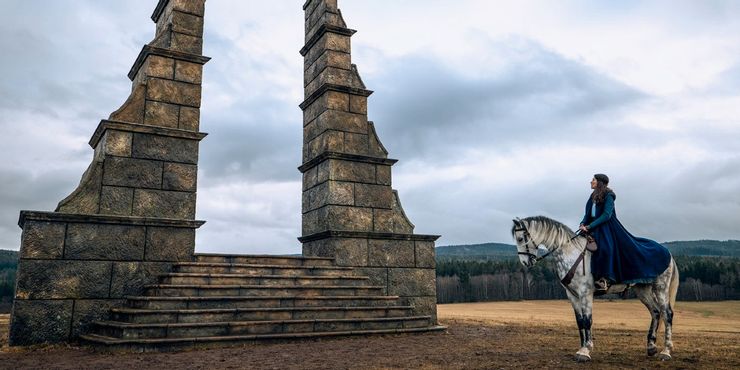 Rafe Judkins, the showrunner of “The Wheel of Time”, claims that Amazon Studios had 11,000 notes for the pilot. The Wheel of Time series, written by Robert Jordan and Brandon Sanderson, covered 14 books and became one of the best-selling fantasy series since J.R.R. Tolkien’s The Lord of the Rings. “Wheel of Time” follows Moiraine Damodred (Rosamund Pike), a member of the Aes Sedai, an all-female organization, as she goes on a dangerous quest.

Amazon dipped into the fantasy genre in 2018 when it announced that the Wheel of Time show will be renewed for a second season. “The Wheel of Time”, directed by Judkins, has been under production since 2019. The Wheel of Time will premiere on Amazon in November 2021, starring Daniel Henney as al’Lan Mandragoran, Josha Stradowski as Rand al’Thor, and Zo Robins as Nynaeve al’Meara. Amazon recently released a teaser for “The Wheel of Time”, which hinted at significant alterations to the novels in the series. Now, Judkins discusses the tremendous task of adapting “The Wheel of Time” for television.

In an interview with GQ, Judkins said that Amazon had over 11,000 notes for the pilot episode of “The Wheel of Time”. Judkins discussed the arduous process of bringing Wheel of Time season 1 to life, saying that impressing the network with the pilot was critical because Amazon pays upwards of $10 million each episode and has already renewed “Wheel of Time” for season 2 before the season 1 premiere. Amazon executives had “unlimited” queries and ideas, according to Judkins, who asked his assistant to maintain a score on notes. Here’s what Judkins had to say about being the showrunner for “Wheel of Time”:

I say sometimes that showrunning is basically just laying your body over the show and trying to protect it as you take 10,000 swords into your back. In the end we got 11,000 notes. Even if I only do like a 10th of those, that’s still like multiple notes per second. It’s very hard to take your little precious kernel of an idea and deliver it at the end of the production-and-notes process.

Adapting the “Wheel of Time” for the small screen is a simple task, but Judkins continues to make sure that the program stays true to the novels’ crucial details. Judkins revealed that he sought counsel from Game of Thrones creators David Benioff and D.B. Weiss, who told him to “just do what you’re going to do.” When it comes to growing its fantasy slate, Amazon appears to be willing to go to any length. Judkins recounted an exchange he had with the network about the extravagant sets on “Wheel of Time” and Amazon’s comfort in covering the costs: “I’m going to build the Two Rivers, and then we’re going to burn it down at the end of episode one.’ And they’re like: ‘Great. What’s next?’ ”

“The Wheel of Time” has captivated readers for decades because of its endlessly interesting world, sophisticated weaponry, and strong female protagonists. For the time being, the excitement for “Wheel of Time” continues to build. Judkins has been hard at work for almost two years, ensuring that “The Wheel of Time” series stays authentic to the novels while still appealing to novices. With Amazon’s adaptation of “The Wheel of Time”, fans of the novels, as well as those anxious to enter into a new fantasy series, have a lot to look forward to.

Previous articlePlayers Are Bartering Due To the “New World’s” Economic Deflation
Next articleHow “House of the Dragon” Will Be Different From Game of Thrones?