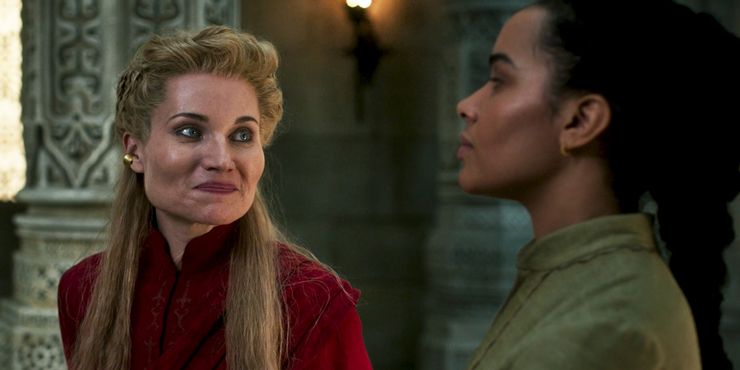 Liandrin is supposed to be the series’ first big villain in Amazon’s adaptation of “The Wheel of Time”, but having her pose such a threat so early on could be an issue for the show. “The Wheel of Time” is based on Robert Jordan’s fantasy series of the same name. His book series included 14 main series novels as well as New Spring, a prequel novel. The showrunner of “The Wheel of Time”, Rafe Judkins, has confirmed that the first season would incorporate material from the first two books.

Moiraine (Rosamund Pike) watches Liandrin (Kate Fleetwood) and her Red sisters catch a male channeler before going on to the Two Rivers in The Wheel of Time. She isn’t blatantly wicked, but she is put up as a rival to Moiraine, Lan (Daniel Henney), and Nynaeve (Zo Robins) in terms of how she promotes her political agenda. Before going to the White Tower for a trial, she tries to persuade Kerene Nagashi (Clare Perkins) to let them gentle Logain (lvaro Morte), and she tries to win favor with Nynaeve and steal her away from Moiraine. The fact that Aes Sedai from outside the Red Ajah are starting to listen to Liandrin’s political deeds is often brought up as an issue, implying that she is gaining power in the White Tower.

Because Liandrin appears to be mixing two unique personas, her portrayal as a political creature could pose a severe difficulty for Amazon’s “The Wheel of Time” show. Elaida, an Aes Sedai of the Red Ajah, gains traction among the Aes Sedai and finally deposes Siuan Sanche to take over the Amyrlin Seat in Robert Jordan’s books. Moiraine’s situation is made much more problematic by the fact that she no longer has a powerful ally in charge of the Tower. However, it is not until the fourth novel, The Shadow Rising, that this occurs. While Liandrin remains a villain in the books, she does not gain political clout in the White Tower when she reveals herself as a Darkfriend, a member of the Dark One’s hidden Black Ajah.

While adaptations can and should make adjustments to their source material, it’s difficult to see “The Wheel of Time” making Elaida and Liandrin the same person. Longtime followers of the books will be excited to see Liandrin revealed as a Darkfriend towards the end of book two, The Great Hunt, as part of a pivotal moment in Egwene’s story arc. If Liandrin has revealed herself, she will not be able to get the same traction in the White Tower as Elaida did, and the White Tower will likely be hardened against trusting such a figure following Liandrin’s betrayal. Alternatively, Liandrin could stage a coup against Siuan before revealing herself, which would require quickly flipping the White Tower upside down and risking Egwene and Nynaeve’s training opportunities.