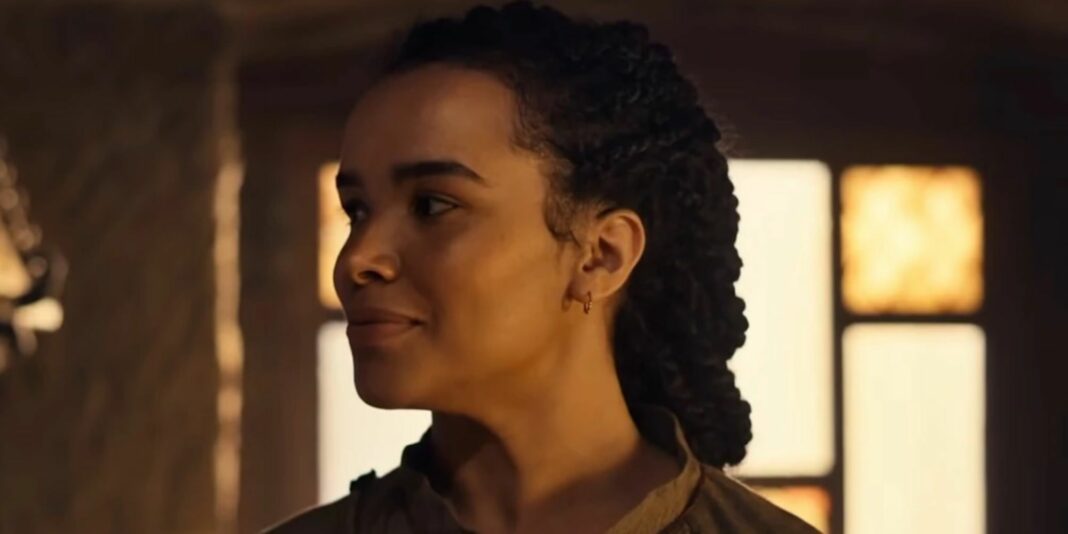 The actress who plays Nynaeve al’Meara in the upcoming Amazon fantasy series “The Wheel of Time” talked about why she loves her character’s famous hairstyle so much.

During the conversation, she was enthralled by the attention to detail that had gone into the production.

“The level of artistry on this production is like nothing I’ve ever experienced before,” Robins said. “So, just like how they’ve got like little spoons, and I’ve got a little herb bag, and things you won’t even see, I feel, which is kind of sad because you’re taking in this amazing spectacle and the attention to detail is just ridiculous.”

Nynaeve’s character, in particular, carries herself with a sense of authority and dignity. She is a young Wisdom to the hamlet of Emond’s Field in the novels, which means she is in charge of directing the Women’s Circle, an all-female group that aids in the region’s governance. Despite her youth, she is also tasked with working as the village healer, which means she has a lot of responsibility.

Robins talked about Nynaeve’s character and how certain aspects of her, such as her dress, inspired her portrayal.

“So when I first had the costume on, it was really informative for me, and really helpful for me to learn how I was going to walk as Nynaeve — where she puts her weight, and she definitely walks with her head,” Robins said.

The actress also paid special attention to her character’s haircut, which was an important element of the play.

In the Two Rivers, where Emond’s Field is located, braided hair has a special value. Braiding one’s hair is a show of maturity for women who have not yet reached marriageable age. Her fellow villager Egwene al’Vere, played by Madeleine Madden, wears her hair in a similar style. Nynaeve mentored Egwene in the first teaser trailer for the program, which included shoving her off a cliff into a river. It’s a first look at Nynaeve’s leadership, as well as Egwene’s admiration for her.

“The Wheel of Time” is based on Jordan and Brandon Sanderson’s epic fantasy book series. The show will air on Amazon Prime Video on November 19th.

Season 2 of HBO’s “The Gilded Age” Has Been Confirmed