It has taken 32 years, but Neil Gaiman’s classic graphic novel The Sandman finally gets a live-action adaptation. Netflix has now released the first look at the series.

Gaiman stated in the behind-the-scenes featurette that “This Sandman is being made by people who love Sandman.”

Although no footage was shown, we were able to see some of the sets and props used in the fantasy series. The concept of art has won over the famous author.

“Our production designers set decorators, and our art department is all wizards. Gaiman said that they are “absolute magicians. ” It’s almost like you’re in your own dream to see the magic they conjure here.

Gwendoline Christie, a Lucifer actress, agreed. She described the project as “truly original” and added that “great detail and care have been taken into how it was brought to life. ”

For a series that includes locations such as the land of Dreaming and Hell, the crew certainly had their work cut out – but it sounds like the production design is just as epic as the impressive cast announced for the series.

You’re in for a nightmare you won’t want out of – this is everything you need about Netflix’s TV version of Neil Gaiman’s The Sandman. 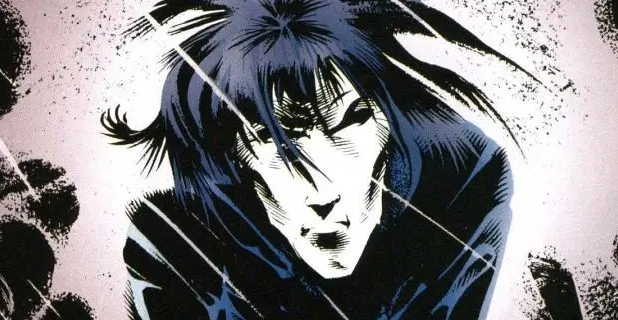 The series has not been released yet, though filming is expected to continue until June 2021. There will likely be extensive postproduction so we don’t anticipate seeing The Sandman before then.

The original attempts to adapt The Sandman into film were made in the 1990s. The project was in shambles until Joseph Gordon-Levitt and David S. Goyer pitched it to Warner Bros. in 2013. Gordon-Levitt left due to creative differences in 2016, and Netflix announced a TV adaptation in June 2019.

The series was all set to start filming in May 2020, until production was paused like most TV projects due to the coronavirus pandemic.

Neil Gaiman wrote on Tumblr that the crew was “taking the opportunity to get the scripts as good as we can” and in September 2020 Gaiman announced on Twitter that the show was set to start filming in October.

Star Boyd Holbrook told Collider that the ambitious series would unsurprisingly have a long shoot, with filming scheduled to finish in June 2021. 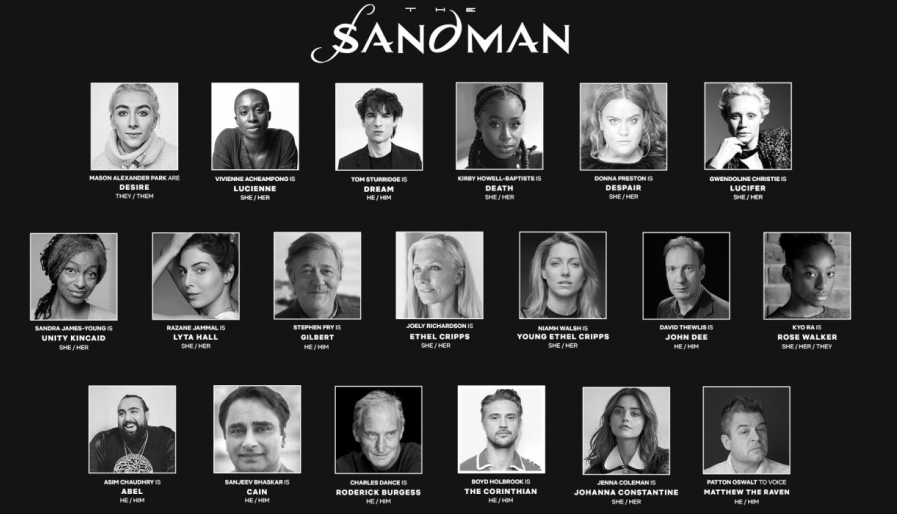 It was later reported that Tom Sturridge (The Boat That Rocked), had defeated Colin Morgan and Tom York to play the role of Morpheus/Dream. He is the dream king and ruler of the Dreaming. He joined long-time Sandman fan Patton Oswalt (MODOK), who was the first cast as the voice of Matthew the Raven.

Netflix unveiled the first glimpse of its cast in January 2021. It included Game of Thrones alumni Gwendoline Christine and Charles Dance, who played Lucifer and Roderick Burgess. Sanjeev (Unforgotten), has been cast to play Cain, while Asim Chaudhry (“People Just Do Nothing”) plays Abel – both Dream’s realm residents – and Vivienne Acheampong is Lucienne, the chief librarian.

Logan’s Boyd Holbrook was confirmed as The Corinthian after Dacre Montgomery and Liam Hemsworth were rumoured to be interested. Logan has been described by Boyd Holbrook as an “escaped nightmare who knows how to enjoy all the riches the world has in store for him. ”

We got another big casting update in May 2021, which revealed that the key part of Death – Dream’s wiser, nicer sister – had been cast as Kirby Howell-Baptiste (The Good Place).

Gaiman stated in a Netflix blog post that “[Death] was significantly more difficult to cast than you might think. ”

“Hundreds upon hundreds of talented women auditioned from all over the globe, and they were brilliant. And none of them were right. Someone who could tell the truth to Dream on one hand and be the person you want to see when your life is over on the other.

“And then, we saw Kirby Howell Baptiste’s.”We knew that we had our Death when (she/her), auditioned.

Roderick Burgess and Ethel Cripps will both be played by Niamh Walsh (Holby City), and Joely Richardson(The Tudors) at various points in the timeline. Ethel’s dangerous son John Dee will be played by fantasy veteran David Thewlis (“Harry Potter”)

Doctor Who fans will surely recognize Jenna Coleman, who has worked with Gaiman before after he penned Nightmare In Silver, and the former companion will be stepping back in time again as Eighteenth-Century occult adventuress Johanna Constantine.

Gaiman wrote that “this Sandman character became so popular, she even had her very own spin-off series. ”

“I created her to fulfill the role of John Constantine in the past. We were aware that Johanna would be in our first season. Therefore, we began to wonder what it would look like if Johanna was in the present.

We tried it, and the script was more sparkly, feistier, and, in some ways, even more fun. We had already written her script and knew we had to cast her. Jenna Coleman’s/her gave us the Johanna we hoped for – tough, brilliant and tricky, haunted, and most likely doomed. ”

The Doll’s House is the second major Sandman story. It tells the story Rose Walker, a young girl on a desperate hunt for her missing brother, who discovers she has a mysterious connection with Dream. Kyo Ra will bring Rose to life, and Razane Jammal from Paranormal will play Lyta Hall, Rose’s friend.

Sandra James-Young (Eastenders), will portray the delightfully namedUnity Kinkaid, Rose’s mysterious benefactor is national treasure Stephen FryIt’s a SinRose’s protector debonair with a penchant to a sword cane is beautifully played by )

The casting of Mason Alexander Park, a non-binary actor, as Desire prompted backlash from some Sandman fans. Also, the casting of Black actors such as Howell-Baptiste and Death as previously white characters sparked a lot of criticism.

Gaiman, however, dismissed the backlash and suggested that Sandman comics fans who were critical of the casting hadn’t read them.

Gaiman tweeted, “I give all of the f***s about my work. ” “I spent 30+ years fighting bad Sandman movies. I don’t give a damn about people who don’t understand/haven’t read Sandman whining that there is a non-binary Desire, or that Death doesn’t seem white enough. Make your decision.

However, many other fans pointed out that Desire is androgynous and that Death’s skin looks more like a ghost than a Caucasian. It is also important to note that Death and The Endless can appear in many forms throughout the series, including as a black man or a young Chinese girl. They are timeless concepts that are not tied to one body.

The sprawling cast might suggest that The Sandman has an intricate and complex plot. The comic ran for 75 issues between January 1989 and March 1996 under DC Comics’ adult-themed Vertigo imprint.

The Netflix summary says that the series is “A rich mixture of modern myths and dark fantasy in which contemporary fictional, historical drama, and legend are seamlessly interwoven. The Sandman follows people and places that are affected by Morpheus, The Dream King, as they attempt to repair the cosmic and human mistakes he made throughout his vast existence. ”

The comics’ main plot follows Morpheus (also known as Dream) who is captured in 1916 by an occult group and held for many decades before being released and trying to rebuild his kingdom.

The dream is one among the seven Endless, along with Destiny Death Desire Despair, Despair, and Delirium – who are anthropomorphic personifications of the concepts of the same names.

The cast announcements and behind-the-scenes look have been all that has been made about The Sandman TV Series. Neil Gaiman however has confirmed that the first season will adapt two graphic novels. These novels, titled Preludes & Nocturnes or The Doll’s House cover the first 16 issues of the original comic book’s entire 75-issue run.

Gaiman saidRadioTimes.come was able to pursue a faraway career by switching to television. More faithful Sandman adaptations rather than the films previously suggested.

Gaiman stated that “The joy of doing it as a Netflix series is that we’re not in the place where things are being thrown out. ” It’s actually the opposite.

Sometimes that means more stuff happens because there is room. We don’t throw things away and we don’t abandon things. That is an absolute joy.

Gaiman confirmed that the series will be set in the present-day, rather than the 1980s setting.

Gaiman stated to DC FanDome that while it will continue to start in 1916, the event that occurs in Sandman No.1 is happening now. “This gives us incredible freedom… It’s very liberating. ”

Is The Sandman going to cross over with Lucifer? 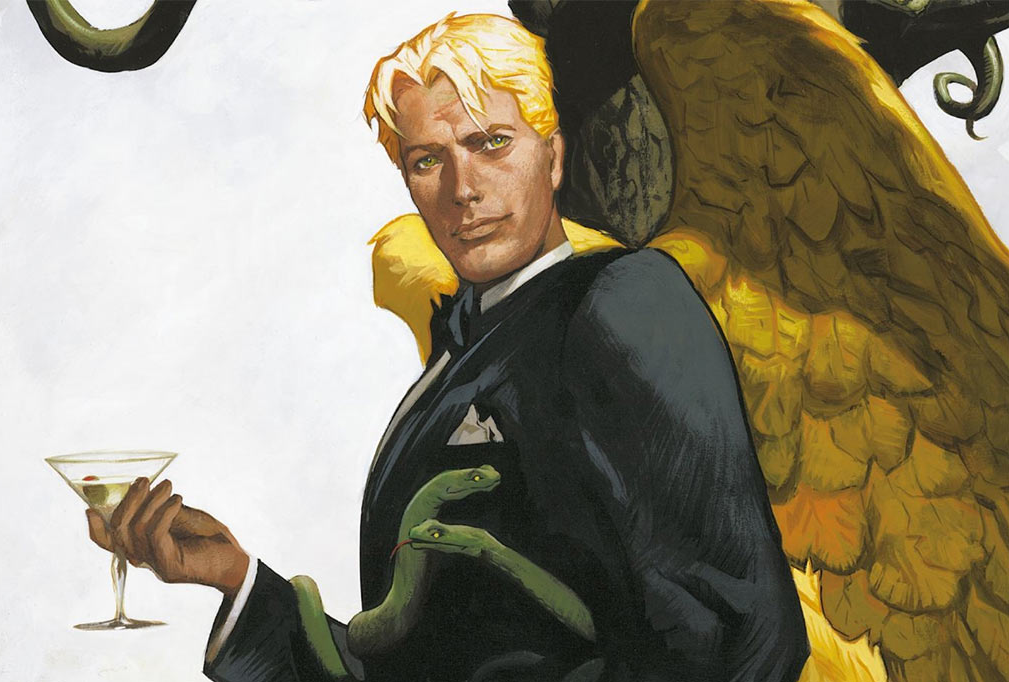 Given that Tom Ellis’s Lucifer is (loosely) based on the character from The Sandman comics and is also a Netflix property, there were rumblings that the two shows could take place in a shared universe.

However, author Neil Gaiman has since confirmed that The Sandman will not cross over with Lucifer due to events that had already taken place in the police procedural.

“You can’t get from the Lucifer TV series to Sandman #3 or even Season of Mists,” Gaimon wrote on Twitter in response to a fan.

Season of Mists is a collection of The Sandman Comics that will be the basis of part of the TV Series. Lucifer features prominently in this series.

When a fan asked why the upcoming show couldn’t use the same cast from Lucifer, Gaiman also wrote: “I’m not sure I understand. Would you rather have Lucifer TV’s Eve, Cain, and other characters than Sandman? How would Season of Mists make sense, when Lucifer has already been to Hell and is running a Lux different from the one in Sandman?

Gwendoline Christie has been confirmed to play Lucifer in The Sandman. Her character will be closer to comic books than Tom Ellis’s.

Trailer for The Sandman

The trailer for The Sandman is not yet available, as the release date is likely to be quite distant. We do have a sneak peek behind the scenes, including interviews with cast members, a glimpse at the production design, and praise from Neil Gaiman for the crew.

However, we are optimistic that some footage will be available by the end of 2021.

While Netflix has only announced an 11-episode order so far, author Neil Gaiman has confirmed that he was planning a second season with The Sandman’s showrunners back in October 2019.

Gaiman stated that there are three of them, Allan Heinberg the showrunner, David Goyer, and me. Heinberg and Goyer have just completed writing the first episode and plotting and breaking down two seasons. So we’ll see what happens next.”RadioTimes.com.

It’s good news, then. Hopefully, there won’t be too many nights until season two.