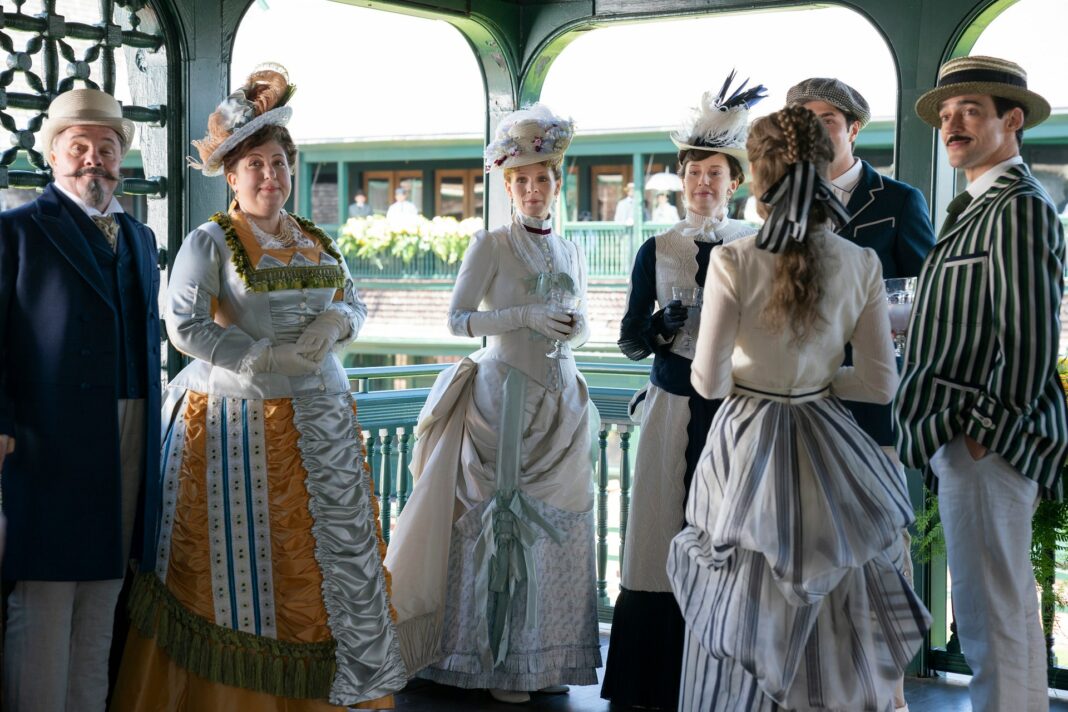 Do you realize how much I enjoy a good courtroom reveal? It’s the most exciting kind of reveal! Despite Marian and Tom’s incessant stupidity, I give this episode five stars. The show’s 3,000 distinct narrative lines might still be chopped down, but it’s finally finding its tone, which is a charming blend of dramatic commercial deals and social elite frivolity.

People in fun hats are playing tennis in Newport as George Russell prepares for his court hearing over his alleged role in the railway catastrophe. Those are the two plots we’re working on. Marian, Tom, the engagement, and so forth. Because they have a memo from George to his employee Dixon implying that George directed him to cut prices on the train parts, George’s case appears to be desperate. Regardless, Bertha is on her way to Newport. Bertha!! This is something I’m not familiar with! George might end up in prison, and I know you’re a tough guy who thinks he can handle it on his own, but people need help in times of crisis! I’m worried that Bertha’s obsessive concentration on social advancement will lead to a scene in which George stalks out and Bertha is left staring into a mirror.

All of the Russells (except George) are traveling to Newport, and Gladys’ debut preparations will continue in their absence. The quadrille is apparently a major deal? They’re rehearsing and wearing costumes, right? When I looked up a quadrille, all I could think was, “Wow, things were boring before television and DJs.” I’m not even a fan of loud music, but if I saw two parties, one of which required you to watch folks perform the quadrille and the other of which was blasting the Black-Eyed Peas, I’d be Peasing it up right away.

Oscar van Rhijn will also be in Newport, primarily to pursue Gladys. He tells John Adams’ descendant (whose name is also John), as well as Always Grumpy. Surprisingly, John is irritated about it. He also exclaims “I love you” to Oscar loudly in what appears to be a gentlemen’s club? ARE YOU KIDDING ME, DUDE? The waiter has arrived. Also, there are 50 males that have the potential to ruin your life. He’s on the verge of revealing Oscar, which isn’t cool, but I understand that men have difficulties managing their emotions at times (hey-ooooo). “I love my gay great-grandson,” I want the original John Adams to remark. That would be a thrilling experience for me.

Agnes is unhappy because everyone is going to Newport and wonders why she and her friends can’t go to Saratoga Springs instead. Saratoga Springs’ slogan is “Health, History, and Horses,” according to my research. Amazing. Because of its thermal springs, it became a popular vacation resort, and in the 1860s, a racecourse developed, and people bet. But it isn’t a brand-new, thrilling location in 1881! Agnes is demonstrating how uncool she is. It’s all right, Agnes; I wouldn’t want to visit Newport either. Mamie Fish forces you to participate in games.

Aurora expresses her concerns about Tom Raikes to Marian before leaving for Newport. WE ALL DO, DON’T WE? Marian advises her not to be concerned, with the assurance of a child. Marian, based on what? Is that your intuition? You don’t know much about him, and he’s plainly a jerk. Boooooo. Marian then uses her superior decision-making powers to inform Peggy that she is ready to marry Tom (???) since it is the only way to silence “the naysayers.” What! What!! So you’re going to marry Tom, the worst person on the show, to prove your aunt wrong? I suppose all plans are plans, no matter how foolish they are. Marian informs Tom that she will marry him despite their lack of familiarity and the fact that they are both terrible. So that’s where we’re at right now.

But, speaking of Peggy, we finally get some insight into her past. I assumed her rage at her father stemmed from his refusal to support her literary career, but it turns out there’s more to it! She fled with her father’s employee, whom she had mentioned previously. They married and had a child in Pennsylvania, but the baby died during childbirth. Her father tracked them down, had Peggy’s husband sign a document nullifying their marriage, and instructed Peggy to forget about it. Forget!! That woman had a husband and a child?! Men should be canceled.

(Side note: Peggy is relating this story to Marian in Peggy’s room, and I know their hand-holding is friendship, but they have actual chemistry, and I shrieked “MAKE OUTTTTT” at my screen.) “Inappropriate while she’s grieving about her lost life,” my notes say, “but they could make out here and I’d be into it.”

This entire plot begins when Tom gives Miss Armstrong a message to deliver to Peggy, and it turns out that he has been looking for the midwife. This appears to be a case of “the baby didn’t die; they simply told you it did.” Armstrong, on the other hand, reads the note (of course) and informs Agnes about it. Peggy is depicted by Armstrong as an unwed mother who abandoned her child. Peggy tells Agnes the truth, then tells her she needs to leave since she can no longer live with Armstrong. Peggy, you’re so fair! Why isn’t Agnes dismissing Armstrong? She doesn’t want to have to train a new lady’s maid. Despite this other Not Great At All move, she recognizes that this is a lousy excuse and is very kind to Peggy. I adore Peggy and Agnes’ scenes together, and I’ll be sad to see them depart.

Okay, now that we’ve gotten beyond the van Rhijn residence, we can move on to THE COURT HEARING. Marian is in Bloomingdale’s when a woman runs away with her pocketbook, and George has been unable to uncover any evidence to defend himself. “Mrs. Dixon!” exclaims the store clerk. Marian claims to know her boss and that she can deliver it to him. Okay. So. I wasn’t sure what to think when Marian told George that his stenographer, Mrs. Dixon, had left her bag at the shop, and he said she must mean Miss Ainsley, I was ecstatic. “OH, MRS. DIXON IS HIS STENOGRAPHER,” I wrote again in my notes. YOU MEAN MISS AINSLEY, HE SAID. AHHHHHHHH. WHAT A WONDERFUL TWIST. THE SHOW HAS DONE IT AGAIN WITH A GOOD TWIST. ALL THE TIME THE STENOGRAPHER.”

I adore it when I can’t see a twist coming; it’s my top fave, so this episode is *chef’s kiss*. Then there was that! In the courtroom! We have a genuine My Cousin Vinny (so wonderful every time) or Legally Blonde (slandered by The Office) moment, in which the stenographer’s admission that she and Dixon are married leads to the case being dropped. Hurray! I despise the fact that I’m siding with a robber baron, but here we are.

Remember that one servant portrayed by Broadway great Michael Cerveris who continues creeping on a lady across the street before we whisk ourselves away to Newport? So, in this episode (thank God, because I’m actually curious), they return to it, and the lady has her servant bring Broadway star Michael Cerveris over because she’s seen him observing her previously. Ma’am, you’ve made a brave move. He’s astonished she doesn’t recognize him, and when he tells her he’s Mr. Collier, she becomes irritated and goes inside as he addresses her as Flora. What’s going on?! This reminded me of a Shop Around the Corner plot in which they’ve only communicated via letter, but I’m not sure what’s going on here. And there’s only one more episode left in the season to find out!

Ward McAllister sounds like Caleb Crawdad in Newport, and a descendent of John Adams has arrived to try to take Gladys away from Oscar entirely out of spite. What a typical Adams move. Everyone is playing tennis with teeny-tiny rackets and standing around a casino that, to my 21st-century eyes, looks nothing like a casino because it has natural light and no whirling lights. Bertha is doing a fantastic job in front of Mamie Fish.

Bertha asks how much it costs to renovate the Astors’ new house, Beechwood, as they all talk about it (I would also ask this, Bertha). Bertha wants to see it, and Ward determines he can get it for her, despite the fact that Mrs. Astor would not want Bertha inside at this point. But it’s all right! Mrs. Astor is a long way away, and Ward is acquainted with the butler, Mr. Hefty! Basically, they hear Mrs. Astor’s chariot as soon as they go in, and Bertha is dragged out of the way, past the basement and kitchens, and into the back, where there are smoking maids, plucked chickens, and beaten rugs. With as much elegance as she can muster, she walks away. I’m really looking forward to the conclusion.

Previous articleUpdates For Season 2 Of The “Squid Game” Are On The Way, According To The Creator
Next article“Stalker 2” Looks to Have Changed Its Name to Chornobyl in Ukrainian Spelling