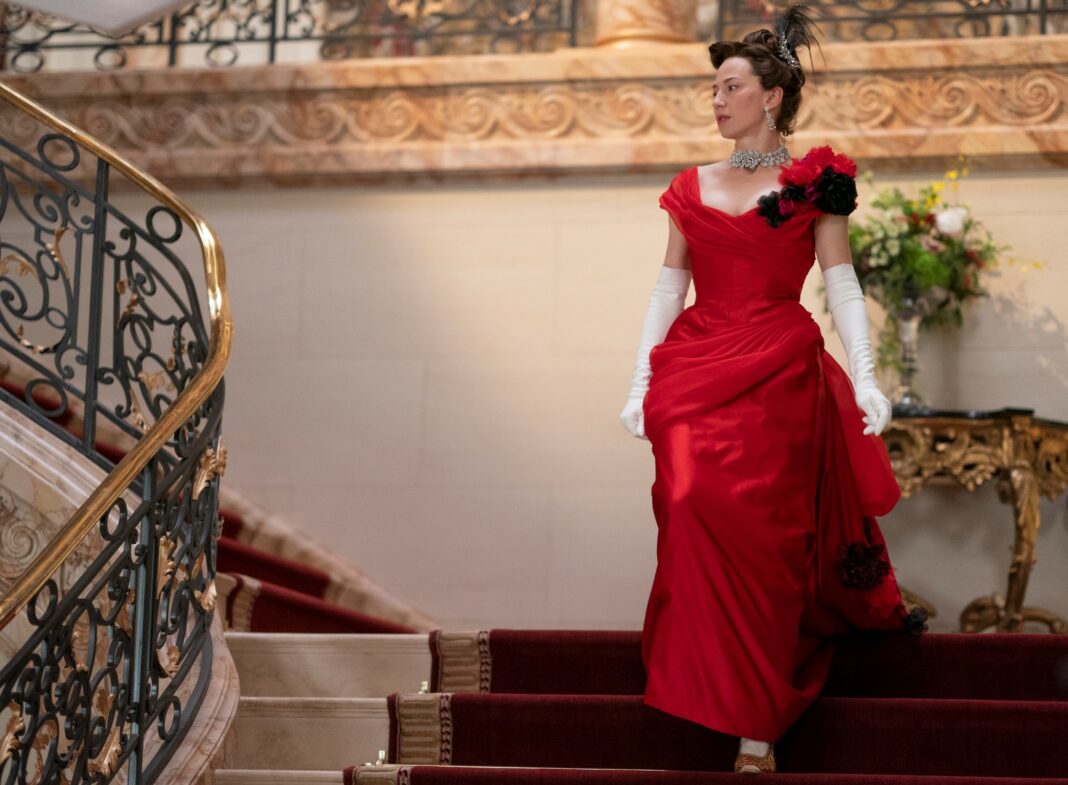 Action! Drama! Stunning outfits! With this episode, it feels like “The Gilded Age“ has finally arrived. So much happens, and we’re finally talking about something intriguing, like an unwanted naked lady’s maid in your bed, rather than stocks and aldermen.

Before the show premiered, I read a rumor that Julian Fellowes was adding a Black main character for the sake of “wokeness,” which is both insulting to Denée Benton and contradicted by this much-improved episode, in which Marian makes a series of thoughtless and/or racist decisions that negatively impact her friend Peggy despite her good intentions.

Peggy informs Marian that she has a meeting with T. Thomas Fortune of the New York Globe, a renowned Black newspaper, after rejecting the Christian Advocate’s offer to print her tale anonymously. Marian congratulates her and suggests they visit Bloomingdale Brothers right away. She fully disregards Peggy’s request to not do so, because why would Peggy be uncomfortable in a store? That’s not something Marian should be thinking about!

Bertha is firing Gladys’ governess at the Russells because she isn’t governessing hard enough, i.e., she allowed Gladys to meet the guy she mentioned last week: Mr. Baldwin. She added insult to injury by allowing him to meet Gladys at a hotel, which is awful, and I would fire her as well. Bertha is attempting to force her way into society, and Gladys, this isn’t helping. My sympathy for Bertha wanes when she dismisses Mr. Morris’s suicide as a result of his weakness. BERTHA, THIS IS NOT GOOD.

Aurora Fane agrees to help George Russell bring Bertha into society as part of an agreement with Charles Fane. I’m not a fan of George Russell or the actor who plays him, but he excels in this episode. I was afraid they’d turn him into a cliched “I’m a powerful man; I get what I want,” but he seemed to really love and respect Bertha. That’s NEAT, by the way. Is this the maid of the aforementioned naked lady? Yes, and we’ll talk about it afterward.

I wish I had a better understanding of fashion! Please excuse me if my comments on the outfits consist of things like “Ada is wearing a very fun turquoise dress” and “Bertha is wearing a dress with a bird print and feathers on the shoulder – BIRD DRESS.” Hopefully, you’ll all make TikToks debating whether these outfits are historically accurate and what the different aspects of the dresses are, and I’ll watch them when my wife shows them to me because I’m not on TikTok. These clothes, as far as I can tell, are daring and wonderful.

This week, Pumpkin the dog brings the van Rhijns and Russells together. Bannister, the butler for the van Rhijns, is walking Pumpkin when he becomes sidetracked and Pumpkin escapes from his leash. Ada is upset, and Agnes informs her that acting as she lives in a tree is pointless, which is classic Agnes. Fortunately, Pumpkin is safely collected by one of the Russells’ slaves, and Bertha has a note delivered to the van Rhijns informing them of the situation. I honestly believed she was holding the puppy hostage. In a way, she has, because she is informing them that they must come to rescue him. Marian and Ada are not allowed to go, but Agnes sends Bannister.

This series gave me precisely what I wanted: Bannister exploring the Russells’ mansion. What do I have faith in Fellowes to know? I trust him to understand that chicken soup for lunch is unappealing and that the fruit knife should be sent with the fruit plate. God, thank you for this brief respite. It reminded me of the old Onion article “The United States Gives Up Trying to Impress England.” Mr. Church, the butler for the Russells, is thrown off by Mrs. Astor’s arrival, since what if she, too, believes colored glasses are impolite?

Peggy has a meeting at the Globe, which goes much better than the Advocate meeting. She is immediately immersed in the printing process when she is instructed to turn the press wheel. Mr. T. Thomas Fortune is the one who asks her, and he gets ink on her fingers right away. It’s a MEET-CUTE situation. So long as the program changes the timeline and he isn’t married right now. He wants to publish one of Peggy’s articles and asks her to write 200 words about political affiliation without voting rights after she questions why she should join a political party when she doesn’t have the right to vote. Peggy, get out there and make a name for yourself!

Miss Turner feels that she’s wasting her life back with the Russells’ basement servants. If Miss Turner’s name doesn’t ring a bell, it’s because I’ve avoided her story line up until now. Her motivation was crystal plain in the premiere: “I’m going to try to bang Mr. Russell,” and she hasn’t done anything but hint at it since. Her doomed-to-failure moment has arrived. She enters George’s room (remember, he and Bertha sleep in different rooms), undresses completely, and awakens him. To say the least, he’s taken aback, but you genuinely believe her argument about being entirely focused on him while his wife tries to fit in would hold water. BUT! George tells her that the only weakness in her reasoning is that he loves his wife. Even if the bar for guys is low, I am consistently impressed.

Miss Turner is told to put her clothes back on and return to her room by George. Why hasn’t she been fired? That is an excellent question. He doesn’t want to take Bertha’s counsel on society women away because he knows how much she relies on it. GEORGE, DAMN, I’m hoping he doesn’t change his mind later and say, “Eh, okay,” because it would be a huge disappointment after this scene.

Bertha is having coffee with Aurora Fane, who is hoping to introduce Bertha to Ward McAllister. McAllister was the inventor of the Four Hundred and a personal friend of Mrs. Astor, so courting him looks like the correct approach. Side note: Aurora refers to Ward McAllister as Mrs. Astor’s amanuensis, which I never see used outside of Victorian literature and pretentious books. Bertha is invited to a concert at the Academy of Music, to which Marian has also been invited.

Mrs. Chamberlain sends Marian a carved box after Marian runs into her while shopping, which Ada tells Marian she must return right away. This is beneficial since it allows us to view Mrs. Chamberlain’s home. She has an incredible art collection, including a Degas painting that is just sitting on an easel. There could potentially be a Monet, but I never took art history in school, so my only knowledge of these is through jigsaw puzzles. Back at the van Rhijns’ house, Oscar has a few more details concerning Mrs. Chamberlain’s somewhat shady past. She lived with Mr. Chamberlain until his wife died, and during that time they had a son together. That is all there is to it. Sigh. Remember when Jason and Mary planned a birthday party for their dog on Selling Sunset, and then Christine showed there and Mary threw a tantrum? That’s something I miss from time to time.

But that’s beside the point because AUDRA MCDONALD HAS RETURNED. Peggy returns to her hometown to celebrate her mother’s birthday. Her parents live in a beautiful Brooklyn home with stained-glass windows in the dining room, a maid, and are generally opulent. Peggy’s father, the parent with whom she is having problems, owns a drugstore and wishes to pass it down to her. When Mrs. Scott toasts Peggy’s success in selling her art to the Globe and her father dismisses it as a fool’s errand, he does not improve their family dynamic. Sir, that is not encouraging! She’s in her twenties! That’s when you figure it out.

Meanwhile, who do you think will show up? Marian is who you’re looking for. Is she a guest? No. She spends what feels like five hours staring in awe around the foyer, absolutely perplexed by Peggy’s parents’ lack of poverty. It’s a classic Office-style moment of secondhand embarrassment, especially what happens next.

Mrs. Scott, who is gracious, instructs Marian to enter the parlor. Mr. Scott, on the other hand, is not so friendly and inquires as to why she is here uninvited. SIR, YOU’VE ASKED A GREAT QUESTION. Marian is carrying a large carpetbag, and when they inquire what’s inside, she refuses to reveal them. THESE ARE OLD SHOES. OLD SHOES WERE BROUGHT BY HER. I’d die instantly if Audra McDonald gave her that look.

Marian, Aurora, and Bertha attend the symphony at the Academy of Music, and the show chooses to take it easy on her in the end. Tom Raikes appears and flirts with her, etc.; Bertha makes the foreboding statement that Tom will struggle to keep up with society without money, and I Shazam’d the concluding music because it is lovely. In the Spring is John Knowles Paine’s Symphony No. 2 in A major, opus 34. There are so many new plot lines to follow up on next week!