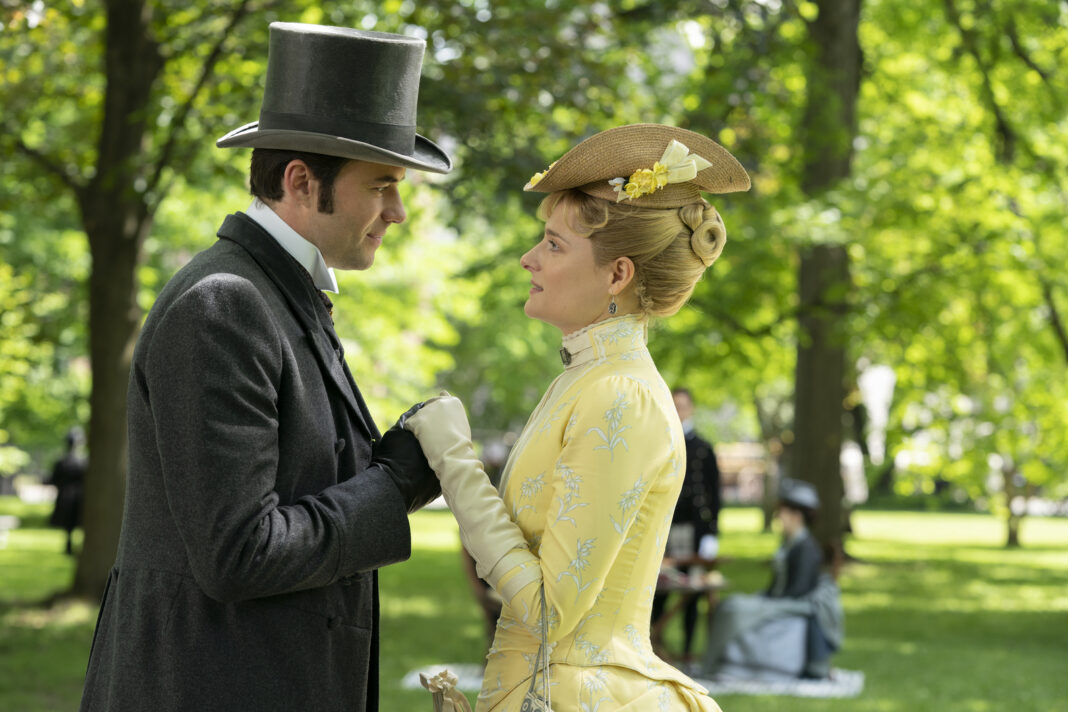 The day is filled with charity bazaars and tepid romances! There’s also some tame insider trading, but we won’t dwell on it for too long.

I think I’ve figured out what “The Gilded Age’s” problem is so far: it needs to be more like Selling Sunset. Please consider what I’m saying. Show me their opulence! These women are bad in general. Set photos of marble bathrooms and jewel-encrusted bosoms to Sam Tinnesz’s “Legends Are Made,” but go a step farther than Selling Sunset and match it with shots of the Lower East Side’s starving poor to make a statement. Sure, it’s a self-evident statement, but it’s more visually appealing than a circle of women arranging a bazaar.

Marian’s acting skills haven’t improved, but Peggy Scott is a joy to see, so this sequence is a mixed bag. Marian’s Pennsylvania lawyer is visiting New York, and Peggy asks if she can speak with him since she requires legal counsel. Her father would find out if she asked a Black lawyer. What is the identity of Peggy’s enigmatic father, and why is she hiding from him? This is one of the few plotlines in which I am currently invested. Also, I’d like Audra McDonald to return, so she and Denée Benton may perform a duet (imagine that!). Marian inquires about Peggy’s writing progress, and Peggy responds that she has sent out query letters but will not reveal any further information until she receives a response. It’s difficult enough to email pitches; the anguish of physically mailing your work and risking it being returned with a rubber-stamped “rejected” like in the movies seems genuinely awful. Peggy, you should be proud of yourself.

Tom Raikes, Marian’s lawyer, appears to be one of her potential suitors. Look, it’s been over two years since the epidemic began, and my tact has all but vanished, so I’m forced to admit that the acting on this show is… diverse, to say the least. I believe we should all be as kind to one another as possible, but we’re all trying to enjoy this program, which has been made difficult by some of the casting choices. Marian’s interactions with Tom are like an Oscar Wilde community theater production, but none of your friends are in it, so there’s nothing for you to enjoy.

Marian invites Tom over for tea because he dropped his legal cost for her (for secret romance reasons), but first, there’s an interlude with Oscar van Rhijn, Agnes van Rhijn’s son, who flirts with everyone and made out with John Adams’ descendant at the end of the last episode. Oscar wasn’t my favorite in the first episode, but he’s a lot better in this one, so let’s speak about him. Oscar’s mustache is all I see when I look at him, but he’s a man who doesn’t take himself too seriously while also being really interested in getting to know Gladys.

Gladys is the Russells’ seemingly innocent daughter across the street. I don’t want to close any doors that could lead to Taissa Farmiga acting out a secret opium addiction or whatever, so “seems” sounds like I know something. Marian mentions meeting Gladys with Aurora Fane, to which Agnes responds, “Aurora skates so close to the edge,” as if Aurora were out every night engaging in illegal street races.

There’s a plot here about the van Rhijns’ chef stealing silver candlesticks to pay off her gambling debts, but all we need to take away from it is that Peggy, Marian, and Ada van Rhijn are wonderful people, which we already knew. I suppose it gives the Irish maid a brief respite from her major personality feature of “racist to Peggy.” Mr. Oscar, according to this Irish maid, is also attractive. Is he the one? Please leave a remark because I honestly don’t know.

Marian is invited to take a stand at the charity fair by Anne Morris, played by Katie Finneran from both Broadway and Wonderfalls. In the eighteenth century, charity bazaars were a big deal. This one is gathering funds to bring the Dispensary for Poor Women and Children and the Infirmary for Indigent Women and Children together. It all makes sense. If you recall, Anne Morris did not attend the Russells’ “at home,” although her friend Aurora Fane (the illegal street racer) attended. Her husband is Alderman Morris, whom George Russell is attempting to bribe, thus she is forced to dine at the Russells’ home, despite her fear of what Mrs. Astor will think.

She informs her bazaar-planning companions of this, stating that she would not be inviting Bertha Russell to the fair. Marian informs Anne that money isn’t everything, but “it is when you don’t have it.” I’m afraid I can’t. “ho-ho!” this sentence is so on-the-nose. Despite being set in “The Gilded Age”, it “showed those rich ladies a thing or two!” I want ruthless drawing-room murmurs that bring down a country or a family name! I’m looking for opulent, lingering photos of sartorial richness à la Selling-Sunset! Instead, it’s a group of out-of-touch women having tea in a not-so-swanky drawing room, planning who they’ll invite to their charity event. Julian Fellowes, I’ve seen Gosford Park. I’m well aware of your capabilities.

Anne compares eating at the Russells’ entrance to Dido flinging herself on the blazing fire. That’s all right. Bertha looks stunning in her burgundy gown, and she has a ballroom in her home that she offers the fair if their original choice of location falls through. Meanwhile, George Russell informs Alderman Morris that he wishes to construct a new train station, and that the alderman can buy shares on margin and then enact a law approving the station. Morris eventually accepts it. The only reason I know buying stock on margin is because of a Futurama episode in which Dr. Zoidberg tries it. So far, it appears that this will end badly, rather than the typical method, in which they all get away with it! The Gilded Age has here! Underneath it all, it appears to be a disaster!

Remember how Tom was supposed to come over for tea? Oscar will be there as well. When Agnes tells out that 1) they are first cousins and 2) Marian doesn’t have any money, Ada responds, “money isn’t everything.” ADA. WHAT. What would be the benefit in this case? That their children, like the nobles of old, are more prone to genetic diseases? If I had to pick a team on this program, it would be Team Peggy first, then Team Agnes since she occasionally says something that isn’t ludicrous. Bertha is also one of my favorites, but I’m waiting for her to do more.

At tea, Tom the Lawyer keeps making broad insinuations about how he might be relocating to New York because of Marian, and man, can a girl just use your lawyerly services and not have you change cities for her when her father has just died? He claims that if he sees anything he desires, he will take it. Argh, argh, argh, argh, argh, argh, However, she requests that he speak with Peggy, and they agree to meet the next day near the Bethesda Fountain.

Oscar brought Larry Russell to tea, and Larry Russell is, for some reason, flirting with Marian. Agnes is enraged that Russell was in her home, and she compares herself to King Canute, fighting to push back the flow of vulgarians, and I’m glad they used a lighter approach instead of writing barbarians! Show, you did a good job for the time being. Then they destroy it by having Agnes argue that facts don’t matter if they conflict with her convictions. It’s so devoid of nuance that I’m wondering if Fellowes penned it in brackets, thinking to himself, “clearly don’t have this be the line, but write something like this,” but then forgot about it and it ended up in the show.

The next day, Marian, Peggy, and Tom gather at the fountain. They have this unintelligible exchange after Tom tells Marian the fountain’s statue “was made by a woman; you’ll enjoy that” (WHAT? ), coupled with various additional Fountain Facts, commencing with Marian: “I hope you just read that in a guidebook.” “I did,” says the speaker. “Thank goodness, you worried me for a second.”

WHAT IS GOING ON.

You might be wondering why this episode only received three stars out of five since there are so many WTF moments, and the answer is that the greatest sections take place around the bazaar at the end. These begin with Bertha reading the papers in bed and seeing that the bazaar has been moved from her ballroom, prompting her to aggressively toss her breakfast tray on the ground, accompanied by dramatic music. At this point, I finally felt something. I made a note of the timestamp so that I could go back and view it again.

Then, as Mrs. Astor, Donna Murphy, a multi-Tony winner, comes up at the bazaar as a breath of new air. I admit that I had a huge gay crush on Donna Murphy as a teenager, so I’m not completely objective, but I believe I’m correct in saying that she does absolutely everything perfectly. Mrs. Astor starts the bazaar, and the aristocratic ladies scurry around looking for doilies.

Mrs. Sylvia Chamberlain, played by Jeanne Tripplehorn, returns as the strangely scandalous Mrs. Sylvia Chamberlain. She and Marian have a brief conversation, and then Agnes appears and informs Marian that her money is poisoned. Another reason Marian is unlikable is that she does not seek out the most vulnerable society lady and demand that she tell her what is going on with Mrs. Chamberlain right away. That would be the very first thing I would do. Mrs. Chamberlain has had bad things happen to her in the past, and Marian is like, yeah, okay, no more questions.

When Mrs. Russell and Mr. Russell arrive, he buys out every vendor and closes down the market. It’s breathtaking. Mrs. Astor is taken aback by the unexpected free time she has at home. They’re just like us, the Astors.

• Wouldn’t it be fantastic if episode three focused solely on Jeanne Tripplehorn’s backstory, with no mention of the other characters except Agnes looking scandalized in the background?

• Did you know Erica Armstrong Dunbar is a co-executive producer on the show? Dunbar is a professor of history at Rutgers University and the author of several works about Black women in nineteenth-century America. She’s fantastic.

• But, truly, is Oscar attractive?