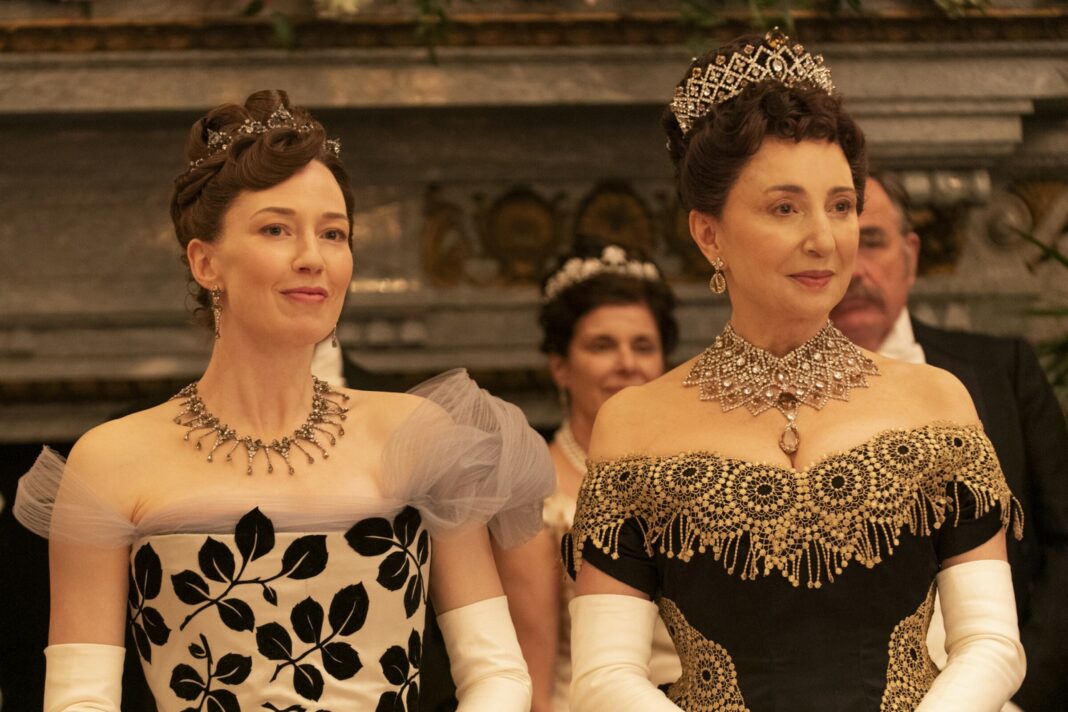 Julian Fellowes, the creator of “The Gilded Age”, discusses the real-life inspiration for Bertha Russell and Mrs. Astor’s clash in the climax. The HBO series began in January and was renewed for a second season after receiving excellent reviews and strong ratings for the network. “The Gilded Age“ follows the lives of wealthy aristocrats and their servants, similar to Fellowes’ international smash Downton Abbey. This time, however, the action takes place in New York City rather than England, and it takes place in 1882 when new money was colliding with old money’s values.

“The Gilded Age” conclusion aired Monday night, and it seemed to usher in a new era for New York’s upper crust. Bertha Russell (Carrie Coon), the wife of a robber baron, plotted ways to be welcomed by the city’s old-money crowd, which is mostly led by real-life figure Lina Astor, during the season (Donna Murphy). Bertha’s efforts were frequently hampered by people who wished to keep her out of their sphere, such as Mrs. Astor. Bertha, on the other hand, scores a major victory in “The Gilded Age” season 1 finale by effectively blackmailing Mrs. Astor into attending her lavish ball; if Mrs. Astor refused, her daughter Carrie (Amy Forsyth) would be denied the opportunity to perform the dance she had learned with Mrs. Russell’s daughter Gladys (Taissa Farmiga).

Mrs. Astor eventually caves into the pressure, bringing with her a big swath of the old money crowd. Following “The Gilded Age” conclusion, Fellowes stated to THR that this storyline was inspired by a real-life occurrence involving Mrs. Astor. Alva Vanderbilt, not Bertha Russell, was the one who did it. Fellowes elaborated:

In real life, Alva [Vanderbilt] was determined that her ball was going to be a success and she hadn’t managed to persuade Mrs. Astor to take her seriously. And she deliberately encouraged the friendship between her own daughter and Mrs. Astor’s daughter, Carrie, and they worked up this little dance they were all going to do with costumes and music and so on and so forth. And then at the last minute [Alva] said, “Well, if your mother isn’t coming, I’m afraid we have to cancel this.” And it had the desired effect. I love the almost cynicism of that, that she was prepared to use this young woman, who is completely innocent, as her tool to get her mother into the house and it just made me laugh when I read it. So I thought I would use it in this show.

“The Gilded Age” has more interactions with American history than one might anticipate at first. While characters such as the Russells and Agnes van Rhijn (Christine Baranski) are fictional, their universe is populated with real-life individuals from 1800s New York. Aside from the Astors, Thomas Edison (Mat Hostetler) was featured in The Gilded Age episode 6, and Clara Barton (Linda Emond) has been a regular character. Fellowes’ decision to use a real-life incident between the Vanderbilts and the Astors as the basis for “The Gilded Age” is a novel method of incorporating history, but it made for compelling drama.

Bertha’s war with Mrs. Astor and Agnes is far from finished, as both Mrs. Astor and Agnes are alluded to in the conclusion. Bertha’s blackmailing of Mrs. Astor is a brilliant example of the depths to which she will go in order to succeed, but it may not have won her many fans. With Season 2 of “The Gilded Age” on the way, viewers can expect this struggle to intensify as the series unfolds. Only time will tell if Bertha succeeds in following in the footsteps of Alva Vanderbilt or falls short of her lofty goals.

Cyberflashing could become a thing of the past on Instagram

How to Brand Your Emails Like a Pro [Infographic]