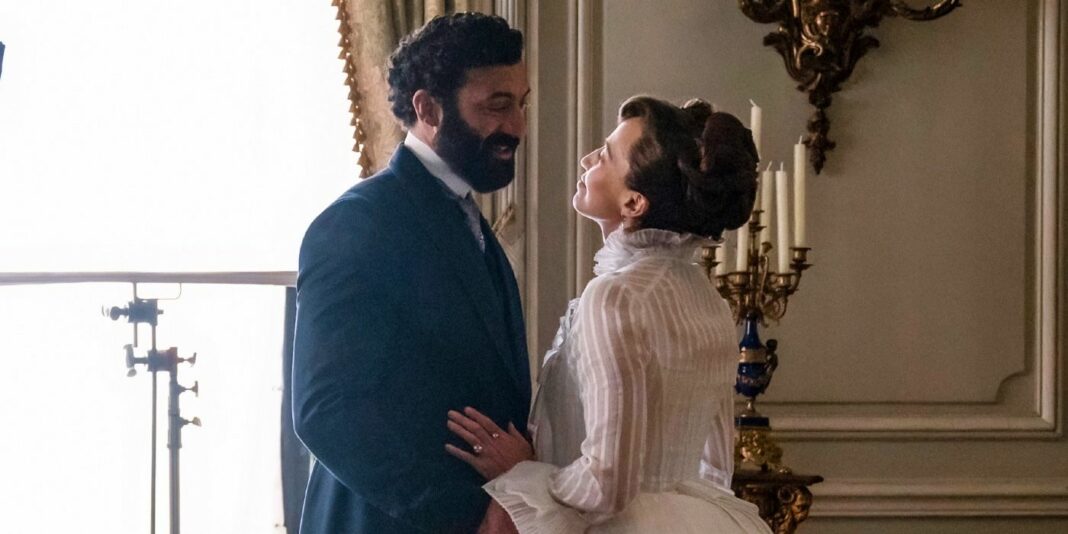 In the first look at “The Gilded Age” season 2, George and Bertha Russell appear to be content. HBO’s blockbuster historical drama, created and written by Julian Fellowes of Downtown Abbey, is set in New York City during the namesake era of great economic boom in the 1880s. Marian Brook (Louisa Jacobson), a young poor lady, enters the city’s rigorous social scene and becomes accidentally entangled in several disputes involving the new money Russell family, the old money van Rhijn-Brook family, and racial tensions between the classes.

Carrie Coon, who starred in Ghostbusters: Afterlife, plays Bertha Russell, while Morgan Spector plays her husband, George, in “The Gilded Age“. Denée Benton, Taissa Farmiga, Harry Richardson, Blake Ritson, Simon Jones, Jack Gilpin, Cynthia Nixon, and Christine Baranski are among the ensemble cast members. “The Gilded Age” was originally planned for NBC but moved to HBO in January 2022, where it aired to high ratings and was renewed for a second season the following month.

“The Gilded Age” season 2 first peek is now available. A set shot revealed a behind-the-scenes glimpse at Spector and Coon filming a scene at the Russell home in a tweet from HBO confirming the program had officially began production on season 2. Back in character as Bertha and George, they embrace one another, looking pretty pleased – and still very much in love. In the area below, you’ll find the season 2 announcement and image:

The rumors are true. #GildedAgeHBO has begun production on Season 2. pic.twitter.com/yT5DL4QyoV

It’s unknown how much time has gone between the season 1 conclusion of “The Gilded Age” and this point in season 2, but the power couple has plenty to be joyful about. Bertha ultimately made her high society debut with a magnificent party attended by practically every notable socialite in the city after considerable prodding. Agnes Van Rhijn (Baranski), her sister Ada Brook (Nixon), and their lifelong friend Caroline Astor (Donna Murphy) were among those who showed up at the request of her daughter Carrie (Amy Forsyth). These are a handful of the characters that are likely to have bigger roles in season 2 of “The Gilded Age”, which will continue to investigate the time of economic transition and the conflict between old and new money.

The ruthless railroad tycoon George and his equally ambitious wife, Bertha, are the personification of new money and important to the show’s major conflict as Agnes and Ada’s obscenely wealthy next-door neighbors. The Russells will most likely continue their journey to the upper strata of New York in season 2 if their shared joy in this first-look photo is any clue. It remains to be seen if their grins will last the entire season, but they are off to a great start. Season 2 of “The Gilded Age” is set to premiere in early 2023, with filming already begun.

Previous articleAccording To Mackenzie Davis, Season 2 Of “Station Eleven” Might Happen
Next article“The Sandman” Image Shows Matthew The Raven For The First Time

The “Rings of Power”: New and Canon Characters

Finding and Fixing Rattles and Buzzes on Acoustic Guitars