If you want to break into Upper East Side society in the nineteenth century, you’ll have to host a lot of parties, and those parties will have to include a lot of feasts. Bertha Russell, played by Carrie Coon, is a new-money interloper trying to create a name for herself in HBO’s “The Gilded Age”. Bertha hasn’t had much luck so far in the show’s pilot; when she invites practically every wealthy person in town to her opulent new home, almost everyone turns her down. It’s a shame because she had her employees make mounds and mounds of lobster and croquembouche for the evening, the most of which goes to charity. We simply had to contact HBO to learn more about how the feasts of “The Gilded Age“ are put together, given the luxury of the spread on exhibit. Michael Jortner, the prop master, and Colin Flynn, the food stylist, were able to provide some answers. For starters, all of those lobsters are real. “At one point, we had 50 or 60 lobsters,” Jortner remarked. “At the very least!” Flynn continued.

Jortner and Flynn met with the directors to prepare each of the show’s spreads, discussing the action, the time of day, and the season in which each scenario in a dining room or kitchen would take place. After that, they looked into what may have been served in a typical upper-crust New York City household at the period. They used a historical menu database at the New York Public Library, as well as other sources such as a cookbook by Charles Ranhofer, a chef at Delmonico’s, the most popular New York restaurant at the time, and etiquette literature to learn about table settings. As Flynn pointed out, culinary trends at the period weren’t as fast-moving as they are now, so there would be some overlap in what many of the characters ate (including a lot of jellied aspic concoctions that are less popular today). The new-money Russells, who boast about having a trendy French chef, and the old-money van Rhijns, however, have significant distinctions. “In terms of presentation, the van Rhijin dinners are more conservative and traditional,” Jortner added. “The Russell dinners are usually more lavish and served in a way that emphasizes the luxury.” 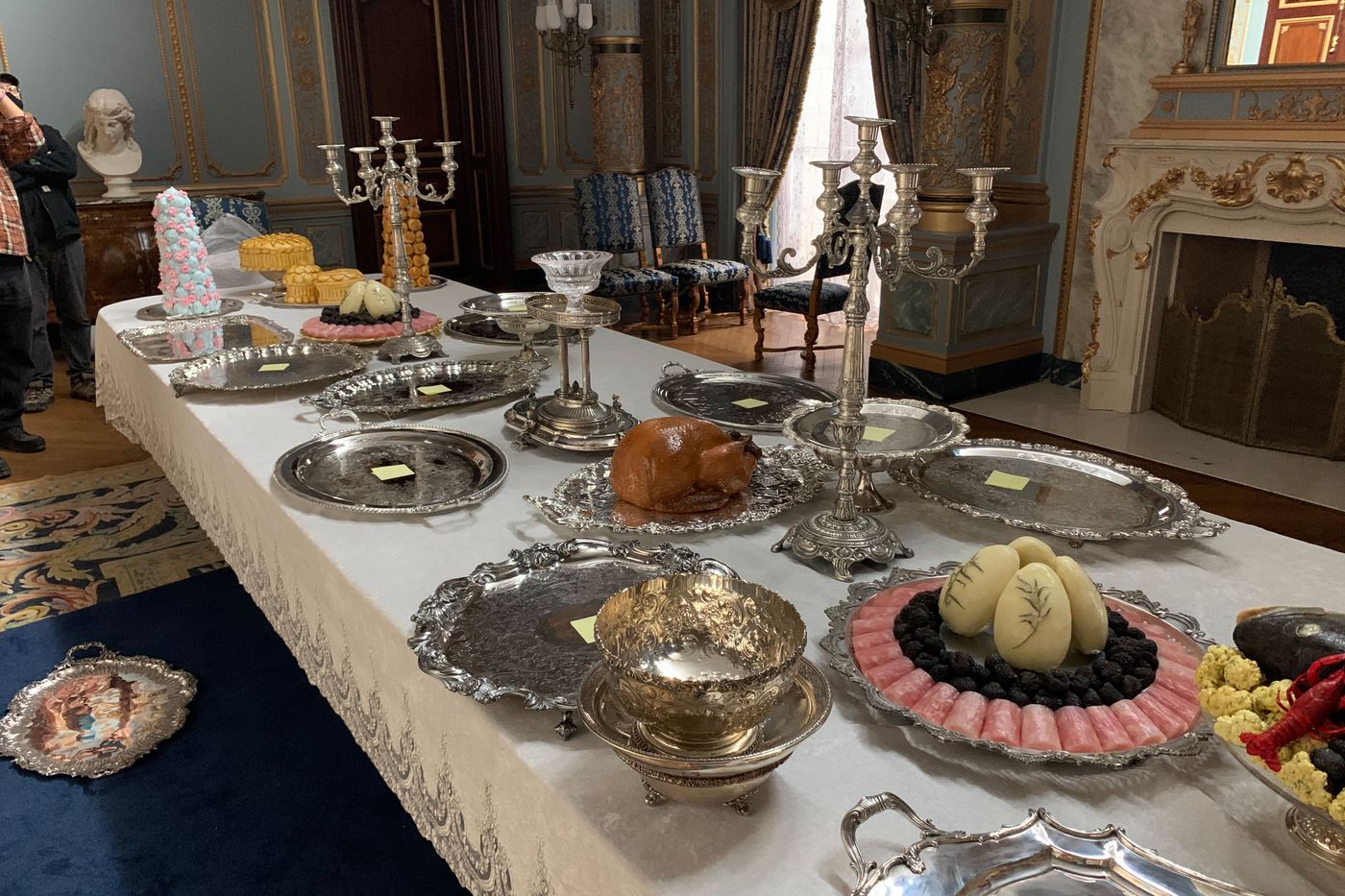 Regarding grandeur, Jortner and Flynn created Bertha’s first-episode spread by first measuring the size of her table and then calculated the number of dishes required to completely cover it. “We intended to make a food mountain,” Jortner explained. “I recall strolling around with Colin and placing everything in its proper place. We just kept walking around the table until it was completely loaded.” The dishes are a mixture of real food (mostly meats and kidneys) and false food (the spears that go into the gigantic slab of salmon; some of the meat pies, which were actually filled with asparagus; and a few inedible cakes at the end of the table). They finished it off with sprigs of foliage and fruit garlands once they had the entire feast set up.

Many of the house interiors in “The Gilded Age” were filmed at real gilded-age homes in Newport, Rhode Island, so Flynn conducted a lot of the show’s cuisine there. (In the process, he became well acquainted with Rhode Island’s fishmongers.) “We had a great time at Anthony’s Seafood in Newport,” Flynn added. In the prop department, he led a “skeleton culinary crew” of eight individuals who cooked the goods they needed in a kitchen separate from the main set. “We would set the table and the sideboard and reset everything for the scenes — filling drinks and moving silverware around,” Jortner explained.

They had to set up the downstairs sequences, where the staff makes the meals when they weren’t producing food for the dining-room scenes. The Russell household’s kitchen set (inside the mansion known as the Elms) was not working, so they would bring in whatever dishes they required for each scene and then place them in the ovens or on stoves to simulate the cooking process. That meant loading up on a lot of fresh stuff because you never know how many take an actor will go through while chopping vegetables. “They might go through a small portion of it or the entire thing,” Jortner added. Because the characters are supposed to be competent chefs, Flynn gave them tips on how to cook in a realistic manner. “Things like how to handle the dough, how to hold a knife, and how to conduct yourself in a kitchen,” Flynn added.

The actors were eating — and, according to Flynn and Jortner, enjoying themselves — when they weren’t pretending to cook on camera. “There was a lot of consuming on video,” Jortner added, “and a lot of people wanting to take stuff home.” For the actors who needed to be filmed eating, the props crew developed alterations based on dietary constraints, and they mainly appreciated the meal. “Beef Wellington was a big smash, and dessert is usually a hit,” Flynn said. “It was clear that there was a lot of cheese that people desired.” Stilton was consumed in large quantities.

The Image From “The Lord of the Rings: Rings of Power” Gets Up Close and Personal With A Scary Middle-Earth Troll