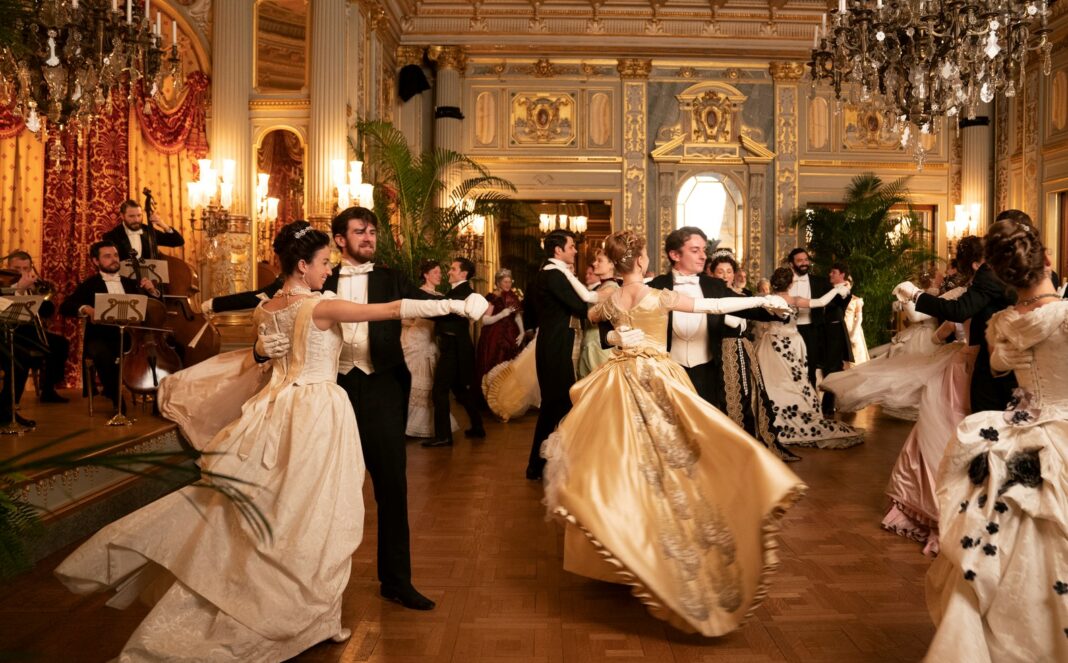 The essential story of George Russell’s (Morgan Spector) legal predicament over a terrible train disaster was resolved by the start of “The Gilded Age’s” season 1 finale, with Mr. Russell’s exoneration. Bertha’s ball, which marked the debut of the Russells’ daughter, Gladys (Taissa Farmiga), into high society, was the central plot of “The Gilded Age’s” conclusion. Marian and Raikes plotted to elope with the help of Peggy and Mrs. Chamberlain (Jeanne Tripplehorn), despite Marian’s Aunt Agnes’ disapproval (Christine Baranski). The sole major plot involving servants in “The Gilded Age” was a shocking revelation regarding the Russells’ chef, Monsieur Baudin (Douglas Sills), which had a role in Bertha’s ball’s success.

Thankfully, HBO has renewed “The Gilded Age” for a second season, allowing the Russells, van Rhijns, Brooks, Astors, and Scotts to continue their journey. “The Gilded Age” is allegedly a hit for HBO, with numbers that outperform The White Lotus, the network’s buzzy summer 2021 craze. Julian Fellowes’ Downton Abbey is currently available on HBO in the United States, and it may be renewed for future seasons. But here’s how “The Gilded Age’s” major events ended for the main characters in the season 1 finale of the historical drama.

Like the Downton Abbey Movie, “The Gilded Age” Finale ended with a bang.

When Mrs. Astor came to Bertha’s ball, she won (just like the Vanderbilts).

Bertha inaugurated “The Gilded Age” by throwing a ball that was poorly attended, humiliating her. Mrs. Russell organizes another gala in “The Gilded Age” season 1 finale, and finally gets her heart’s desire: a formal acknowledgment from Mrs. Astor. Bertha was embarrassed once more when she approached Mrs. Astor and was denied an audience. Lina was receiving other, more desirable guests, which added insult to injury. As a result, Carrie Astor (Amy Forsyth) and the children of the other families who refused to attend Gladys’ debutante dance were not invited by Bertha. Carrie, on the other hand, persuaded her mother to change her mind. Mrs. Astor paid Bertha a visit to make her daughter happy, but Mrs. Russell deduced that it was all for show and issued an ultimatum for Mrs. Astor to attend the ball and bring her other social acquaintances with her.

Mrs. Astor surprisingly agreed, leaving Agnes van Rhijn stunned that she and her sister, Ada Brooke (Cynthia Nixon), would now have to cross the road to attend the Russells’ party. The arrival of Mrs. Astor and other members of the Four Hundred at Bertha’s house marked the formal acceptance of the Russells’ ascension into New York high society, which Ward McAllister (Nathan Lane) had been arranging with Bertha. Bertha, on the other hand, stuck to her guns and achieved all she wanted (for herself and Gladys). Of course, George aided by blackmailing one of his customers into attending the ball, but Mr. Russell has always been as committed to his wife’s success as she has been to his. Bertha’s success is an example of “The Gilded Age” adopting real-life events, as it’s practically identical to Alva Vanderbilt’s victory over Mrs. Astor, which allowed the Vanderbilts to enter high society.

Meanwhile, at the Russells’ party, additional events unfolded. Oscar van Rhijn (Blake Ritson) moved closer to his objective of marrying Gladys for her riches, much to the dismay of his secret lover, John Adams (Claybourne Elder). Unfortunately, Thomas Raikes also attended the Russells’ ball, oblivious to Marian and her aunts’ presence, and the couple’s breakup was complete.

When Marian confronted the social-climbing lawyer Tom Raikes about his planned elopement, Raikes disclosed that he was intended to marry the affluent Cissie Bingham (Katherine Romans). Raikes spent the whole first season of “The Gilded Age” courting Marian and declaring his love and desire to marry her. Raikes seemed genuine to Miss Brook since she had no wealth for him to pursue, but the lawyer was always too perfect and ready to marry Marian from the start. Meanwhile, Aunt Agnes claimed that she is “always right,” and Thomas Raikes turned out to be the “adventurer” Agnes predicted, which was a disappointing but not unexpected turn of events.

Miss Brook’s admirer was more charmed with the wealthy life of New York high society, as Marian’s cousin Aurora Fane (Kelli O’Hara) remarked when she spotted Raikes all over town. If they married, Raikes would have had to give up his job and support Marian, which he didn’t want to do. Raikes, on the other hand, chose the cowardly way and intended to end his relationship with Marian with a letter before she approached him in her office. It’s uncertain whether Tom Raikes will return in “The Gilded Age” season 2 now that their tale has been ended. Marian and Larry Russell had already been mentioned in the series as a probable couple (Harry Richardson). They became friends, and Larry promptly rescued Marian from the ball, establishing the foundation for a relationship that will undoubtedly enrage the Russells and Aunt Agnes.

The Real Story Behind Peggy’s Baby

Throughout “The Gilded Age” season 1, details of Peggy Scott’s background were disclosed, and the conclusion revealed that Peggy’s kid, whom she thought had perished, was alive after all. Worse, her father, Arthur (John Douglas Thompson), was the one who arranged for the baby’s adoption, and he told Peggy and her mother, Dorothy (Audra McDonald), that the kid had died. Peggy’s anger for her father arose from his rejection of a connection she had at his drugstore with a stockboy called Elias Finn and the turmoil that ensued.

Peggy discreetly eloped with Elias and became pregnant before meeting Marian Brook and requiring the assistance of her lawyer, Mr. Raikes, but the baby was stillborn. Peggy’s marriage to Elias was later canceled by Arthur while she was suffering from post-partum depression. Arthur’s rationale for kidnapping and handing away his grandson was to keep Peggy and Dorothy from being humiliated. Peggy and her mother traveled for Philadelphia to retrieve the baby now that she knows her child is alive, setting the stage for Miss Scott’s next adventure in “The Gilded Age” season 2. However, it remains to be seen how Peggy’s unexpected disappearance to find her kid would influence her profession as a writer and journalist for T. Thomas Fortune (Sullivan Jones).

The discovery that Monsieur Baudin is an American, rather than a Frenchman, is perhaps the most startling story in “The Gilded Age” season 1 finale. Bannister (Simon Jones), Church (Jack Gilpin), and Mrs. Bruce all saw Baudin arguing with an unidentified woman in episode 8 of “The Gilded Age” (Celia Keenan-Bolger). The woman, Baudin revealed, was his wife, who was blackmailing him and threatening to expose him as Josh Borden of Witchita, Kansas. To George, Baudin revealed his true origins as a merchant sailor who learned to cook in Paris and assumed a French identity in order to get work in New York. Bertha demanded Baudin be fired to save face, despite the fact that Mr. Russell praises loyalty despite his brutal business practices.

When Bertha’s snobbish substitute French chef became inebriated and was unable to cook for the event, Borden stepped in, prepared the dinner he had planned, and “saved the show,” according to George. Despite Bertha’s worries about Borden’s “Middle West” roots, he was rehired as the Russells’ cook as a result of his efforts. Monsieur Baudin/Josh Borden’s narrative was weird but entertaining. Most importantly, it presents a difficulty for the Russells, who must suddenly admit to having a French-trained American chef just as they enter the upper crust of New York society.

Season 2 of The Gilded Age: Questions and Answers

Surprisingly, the Gilded Age season 1 finale didn’t settle the remaining plot of Bannister’s betrayal of the Russells via a letter addressed to Aunt Agnes. Turner (Kelley Curran) wrote Bannister a message after Bertha dismissed her, indicating the culprit. Bannister then paid the Russells’ staff a visit, implying it was Church (who is the obvious suspect). Despite this, Bannister took no action against Church, deferring the resolution until season 2 of The Gilded Age. Turner’s return to seeking vengeance on George and Bertha Russell in season 2 is likewise unknown. Instead, “The Gilded Age” conclusion closed with the two butlers from competing families, Bannister and Church, bowing to each other, just as the series began (but this time, with a hint of suspicion from Bannister).

Watson’s (Michael Cerveris) fixation with Mrs. Flora McNeil (Rebecca Haden), whom George’s valet spends his days watching from afar, was also left unsolved. Mrs. McNeil recognized Watson as “Collyer,” and she seemed to remember him. When the McNeils went to the Russells’ ball, Watson avoided Flora. Another storyline that needs to be resolved in “The Gilded Age” season 2 is this one. However, as the story progresses, the fortunes of “The Gilded Age’s” servants may change. “After all, this is America,” as Agnes’ footman Jack (Ben Ahlers) warned Bridget (Taylor Richardson), sums up the potential for anything to happen in “The Gilded Age”.