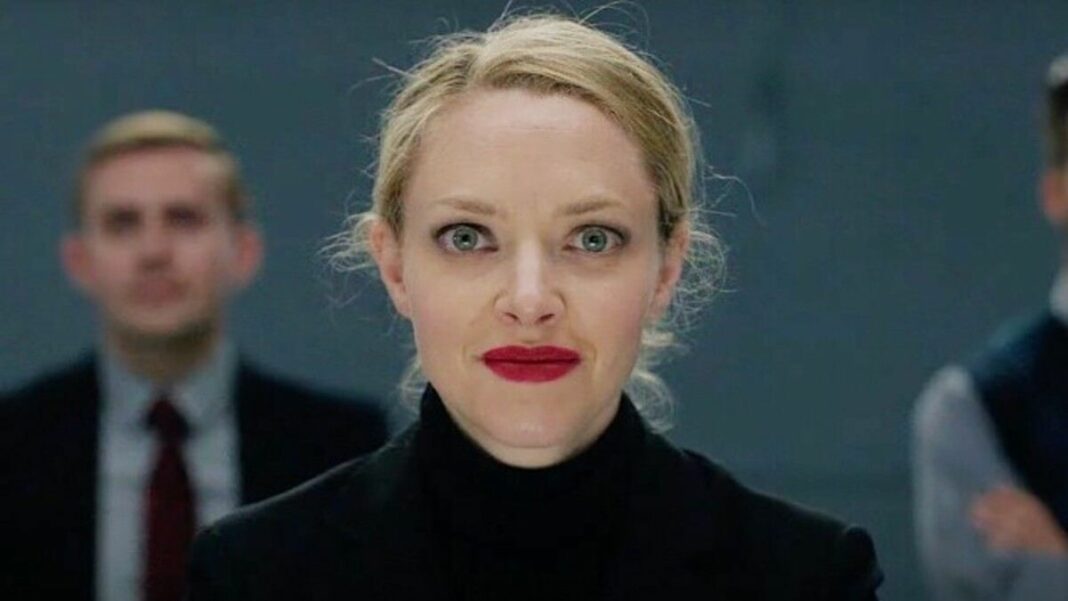 The penultimate episode of this miniseries, “Heroes,” does not disappoint. We get to catch up with The Wall Street Journal reporter John Carreyrou, who is going hard on his Theranos expose, right after a montage (set to David Bowie’s “Heroes”) of Elizabeth crushing it in 2015 (attending a Time 100 event, jogging, Sunny’s fancy cars and their big house, lots of green juice, compliments from former president Bill Clinton and then-Vice President Joe Biden). His report of all the doctors and patients he’s spoken to thus far to his editor Judith (LisaGay Hamilton) is a vital and grounded reminder of the true, human cost of all Elizabeth-slash-Theranos’ lies. The tone of the episode is set; we may be having a good time watching “The Dropout”, but let’s not forget that Elizabeth and the rest of the Theranos team put people’s lives in jeopardy and lied about it to the public the entire time. In the actual world.

As Carreyrou’s Wall Street Journal investigation heats up, this entire episode is about the juxtaposition of Elizabeth and Theranos’ major public successes, and what she, Sunny, and the Theranos powers that be will do to protect it, with the effects of their lies, fraud, and threatening scare tactics. When Theranos learns of the story — because Carreyrou has to reach out to them for comment as a journalist — Elizabeth and Sunny go ballistic, telling David Boies to “sue everyone.” Instead, Boies employs his Weinstein special: harassing and ruining the credibility of negative sources (done here by Linda from legal, played by Michaela Watkins, and Sunny).

This means we’ll see situations like Elizabeth quietly telling Charlie Rose about her lifelong desire to transform the world, while lab director Mark hurriedly phones Carreyrou to report that he’s being followed and observed. While Elizabeth discusses doing anything for someone you love, Erika (who was molested in college, mind you) notices someone observing her in the dark, empty parking lot of her new employer. Despite Carreyrou’s encouragement (“They wouldn’t make it scary if they weren’t scared,” “They’re scared because they know they’re wrong and you’re right,” Mark, what are you talking about? (Also, this is the episode’s final scene with Mark, so I hope he’s okay.) Carreyrou is stressed as a result of this, as well as Sunny coercing practically all of the Arizona doctor sources to back off with threats regarding their Yelp reviews.

It also means that after Tyler is attacked by his dear ol’ grandpa and Linda from legal, we get scenes like Elizabeth and the Theranos employees cheering and dancing about the fact that they “caught herpes!” At the moment, the Shultz family (go Charlotte!) comes together to protect their loved ones, but Tyler and George are still at odds because George refuses to realize he’s wrong about Elizabeth. Harsh remarks are flying about. Nothing like a healthy dose of family drama to amp up the drama in an already tense scenario. Despite the fact that Elizabeth and Sunny are feuding because Walgreens is unhappy and Sunny has replaced Mark as lab director with a dermatologist, the wildly celebratory herpes scene is another neat juxtaposition of Theranos as it seems on the surface and the real Theranos beneath (case in point: Linda from legal is in both scenes, coldly trying to sue and strong-arm Tyler one minute and cheering and clapping and dancing about the success of herpes test the next).

All of this collides in a stressful meeting between David Boies, Linda from legal, several Theranos lawyers, Judith, Carreyrou, and Wall Street Journal counsel. It’s full of legalese, tough talk, bravado, and questions about the app store, but the crux of it all comes when David Boies (who claims to respect journalists) asks, “Do you really believe that all of the academic, scientific, and health-care communities’ recognition of Theranos achievements… is wrong?” That every previous story on Theranos, including this one in the Journal, was the result of the company’s deceptive manipulation?” Theranos has a strong front-slash-façade of success. “None of it is true,” to use Boies’ own words against him. And John Carreyrou is well aware of it. When Boies and some of the other lawyers make a little blunder, the conference is immediately ended, but Judith and Carreyrou are well aware that they have stabbed their fish. They celebrate and get ready to publish the essay (it’s a wonderful moment, but I’d like to see Judith do more Sicilian fishing).

Elizabeth goes to George to reaffirm his support before the book is published. Despite his skepticism that she would ask Rupert to kill the article (“He says his hands are tied”), he continues to regard her as a perfect angel and indicates that she may not be surrounded by the appropriate people, notably pointing the blame at Sunny. This leads to a tense exchange between Elizabeth and Sunny, in which we learn that he chooses her clothes and they trade not-so-subtle threats about who knows what and the possibility of turning on each other before cheerfully saying they’ll miss each other while she’s away at a Harvard Medical School event.

Dr. Phyllis Gardner, citing a significant subject from “Iron Sisters,” asks Elizabeth what she thinks will happen to all the other women who want to create enterprises once Theranos blows up into the catastrophe that it is. “It’s not just you,” says the narrator. Phyllis has always been a one-note character who speaks in tight bon mots, but she always tells the truth, which I enjoy. Furthermore, this conflict has been anticipated for a long time. When the piece is published, Elizabeth’s phone begins to ring with notifications, and I’m compelled to question, “Why doesn’t she put that thing on vibrate?” once more. C’mon!

The story is making waves, but as The Dropout approaches its conclusion, Elizabeth, Sunny, and everyone at Theranos are doubling — tripling? — down, complete with a “them vs us” spin and a corporate cry of “Fuck you, Carreyrou!” It has a Lord of the Flies vibe to it, but it performs the job of energizing me… for the final episode next week

Previous articleThe Biggest TV Battle of 2022 Is Game Of Thrones vs. “Lord Of The Rings”
Next articleBrandon Sanderson And “Elden Ring” Publisher Could Work Together On A Game