“The Dropout” on Hulu relates the story of how convicted fraudster Elizabeth Holmes duped people into believing her firm Theranos’ products worked, but there are a few crucial differences between the genuine story and the short series. The eight-part miniseries is based on an ABC News podcast of the same name hosted by journalist Rebecca Jarvis. New Girl writer Elizabeth Meriwether adapted “The Dropout” for television, and it stars Amanda Seyfried and Naveen Andrews as Theranos CEO Elizabeth Holmes and COO Ramesh “Sunny” Balwani, respectively.

The biographical drama begins by portraying Elizabeth Holmes as a driven girl who doesn’t have many friends because she is focused on becoming a billionaire and helping the world. Seyfried, who starred in Twin Peaks: The Return, is fantastic as Holmes, even capturing the artificial deep voice that the former Theranos CEO is known for. It’s so good that The Dropout‘s Amanda Seyfried’s Holmes and the real Elizabeth Holmes from the ABC News podcast could be confused for one another. The Dropout employs temporal jumps to present the podcast’s study of Theranos’ numerous red flags as they become evident to various employees within the organization. In this manner, viewers receive the perspectives of Theranos staff while also understanding behind-the-scenes story details like Sunny and Elizabeth’s romantic relationship from the start.

“The Dropout” was able to match the way the original podcast played out by using temporal leaps between 2017 when Holmes’ testimony in the government probe into Theranos’ fraudulent schemes takes place, and various years before that, which reveal how Theranos came to be. When the ABC News podcast fails to mention names and facts that the miniseries does, such as Theranos’ validation study with Pfizer, which the podcast only refers to as “major drug company,” John Carreyrou’s book Bad Blood: Secrets and Lies in a Silicon Valley Startup, which investigates Theranos, fills in the gaps, demonstrating how the miniseries and reality aren’t that far apart. Here’s how “The Dropout” altered the true narrative of Theranos and Elizabeth Holmes. 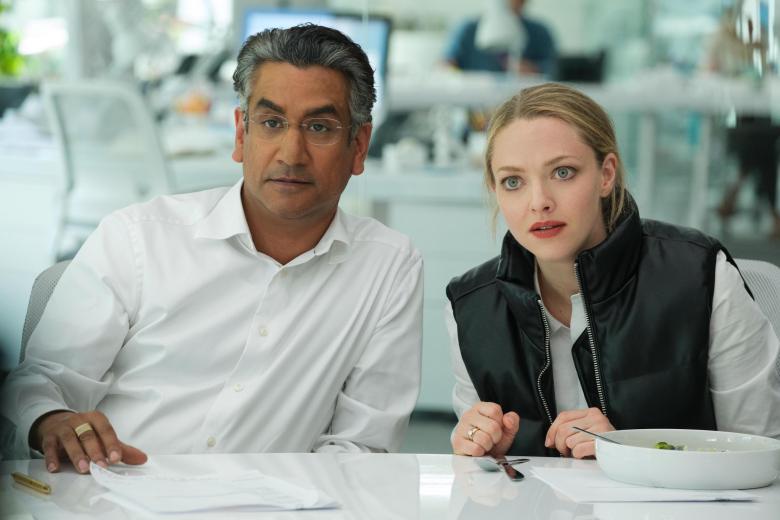 More Apple employees have been poached by Theranos.

As “The Dropout” illustrates, Theranos is rapidly expanding, and two of the people Seyfried’s Holmes is courting to work for her are Apple employees. In the third episode of The Dropout, Holmes snatches product designer Ana Arriola (Nicky Endres from One Day At A Time) and Jobs’ right-hand man Avie Tevanian (Amir Arison) from Apple. Despite being happy, especially Arriola, to be working under a “young female CEO instead of a cocky little boy in a sweatshirt,” as Apple’s former product designer puts it, the episode focuses with precision on the strange things Arriola and Tevanian saw from day one as they began collaborating with Theranos.

However, Holmes did not just kidnap the two top figures. Holmes wanted Theranos to have the same design-first approach as Apple, so she hired people directly from the Apple ranks. Justin Maxwell, Adam Vollmer, and Mike Bauerly soon joined their former Apple colleagues, along with Arriola, who joined Theranos as chief design architect, and Tevanian, who became a board member of Holmes’ business. Vollmer worked at Theranos as a development engineer while Maxwell and Bauerly worked on the design.

Tevanian is quickly ejected from the board in Hulu’s “The Dropout” episode 3 shortly after his appearance. Despite the fact that the miniseries solely depicts venture capitalist Don Lucas (Michael Ironside) requesting Avie to leave, things were considerably murkier in reality. According to Tevanian’s talk on “The Dropout” podcast, after he agreed to resign at Lucas’ request, the venture capitalist demanded that he sign a paper relinquishing his rights, which he refused. Tevanian then received an email from Theranos’ general counsel at 11 p.m. on Christmas Eve that year, stating that he needed to sign away his rights or they would sue him because they believed he was denigrating the firm by talking about it. While “The Dropout” makes it obvious how abrupt Avie’s resignation was, the situation was far more nasty and convoluted in actuality.

“The Dropout’s” depiction of Ian Gibbons (Stephen Fry of The Hobbit) committing suicide and how Theranos handles it, as well as his widowed wife, Rochelle (Kate Burton), appear to be slightly less brutal than what transpired in actuality. After Ian’s death in the hospital following his attempt to take his life, one of Ian’s employees, engineer Brendan Morris (Bashir Salahuddin), at least sends an email to all of his Theranos coworkers to honor Ian and his achievements. In actuality, as Rochelle Gibbons revealed in an ABC News podcast, Theranos did not even send flowers to mourn the loss of a scientist who had worked for the company for ten years. They only sent two letters: one requesting that all of Theranos’ intellectual property be returned to them, and another from the company’s lawyer threatening Rochelle with a lawsuit if she revealed what had happened to Ian publicly.

Deals at Walgreens and Safeway

Walgreens asks Kevin Hunter to inspect Theranos’ lab in episode 4 of The Dropout, and Walgreens hires the lab consultant to ensure that Theranos’ product works. The limited series pits Walgreens and Safeway against one another, with “The Dropout” even depicting Holmes deceiving Walgreens into thinking Theranos had picked Safeway to expedite the Walgreens agreement. Walgreens is the one who gets an exclusive arrangement with Theranos in the episode. However, according to John Carreyrou’s book Bad Blood, Safeway not only struck a contract with Theranos but did so before Walgreens. Despite establishing agreements with both Safeway and Walgreens, Holmes portrayed them as exclusive because the first would have been the only supermarket chain to carry the Edison, while the second would have been the only drugstore chain. The two corporations were not delighted with the deal, but they accepted because they feared they would have “lost out on a significant new commercial opportunity” if they didn’t.

“The Dropout” repeatedly demonstrates Holmes’ adoration for Steve Jobs, with the Theranos CEO only utilizing Apple products and even ecstatically cheering while queuing with fans at the initial iPhone introduction. According to the “Dropout” podcast, Holmes’ characteristic look of a black turtleneck under a jacket was proposed to her by Arriola, who told her about Jobs’ infatuation with the Issey Miyake turtleneck, which inspired Holmes to adopt the appearance. Elizabeth Holmes’ preoccupation with Apple had an impact on her work at Theranos since she chose to hire Chiat/Day, one of the most prestigious advertising agencies, to create the “1984” and “Think Different” Apple campaigns. As revealed by engineer Ed Ku in John Carreyrou’s book, Holmes adored Steve Jobs so much that she kept an article cut out on her desk with a comment by her old Stanford professor Channing Robertson comparing her to “another Bill Gates or Steve Jobs.”

Holmes shied away from phone calls and remained unreachable for much longer.

In “The Dropout” episode 4, Seyfried’s Elizabeth Holmes constantly tries to avoid Sunny and Christian’s calls, often by telling them she’s about to go into a meeting while she’s actually on the company jet. In truth, according to the “Dropout” podcast, Holmes managed to avoid calls for days. When Holmes couldn’t be reached, Chiat/Stan Day’s Fiorito told podcast presenter Rebecca Jarvis that she’d “go dark for a month,” and Theranos wouldn’t even explain why.

The Lies of Elizabeth Holmes Were Much Worse

Many lies were told by Holmes and Balwani to employees, potential collaborators, and financiers, as seen in “The Dropout”. However, the lies Holmes told in actuality were far worse. Stan Fiorito of Chiat/Day believed Theranos collaborated with the Pentagon after Holmes told him her technology was being used in Afghanistan, while George Shultz, a board member of Theranos and a former Secretary of State, believed hospital operating rooms and medevac helicopters were already using Holmes’ technology because he believed Elizabeth’s claims. Hulu’s “The Dropout”, based on the ABC News podcast of the same name, allowed Holmes to refute her own claims by playing the tape of Elizabeth’s official statement in episode 5, in which she finally admitted the truth and stated that Theranos’ Edison was never used in emergency rooms, hospitals, battlefields, or medevac helicopters. While “The Dropout” mostly adhered to the facts, it did make a number of adjustments to soften Elizabeth Holmes and her actions in real life.

Why Episode 8 Of “Squid Game” Is So Much Shorter?