FX chairman John Landgraf and showrunner Eliza Clark have described how Y: The Last Man has been modernized for today’s world, including covering a wide variety of gender identity, as a take on the classic ‘last man on Earth’ premise. Y: The Last Man was first published in 2002 and featured Yorrick Brown, who, together with his capuchin monkey, is the only man remaining on Earth after a strange pandemic takes out everyone with a Y-chromosome. Yorrick will be portrayed by Warcraft’s Ben Schnetzer, featuring Justice League’s Diane Lane as his mother.

An adaptation of Brian K. Vaughan’s comic-book series is already in the process for certain years.  However, production was hindered by the studio’s demand for creating only one film out of the ten-volume series. FX finally received the series in 2015, with Vaughn working as an executive producer with Nina Jacobson and Brad Simpson from American Crime Story. Clark was hired as showrunner in 2019 after former showrunners Michael Green and Aida Mashaka Croal abandoned the project due to creative disagreements. The premiere date for Y: The Last Man is scheduled for September 13.

Naturally, the world has evolved since the comic book’s first release, particularly gender identification. The initial series concentrated largely on the gender binary of male and female, but Clark and Landgraf revealed during FX’s Television Critics Association Press Tour how Y: The Last Man will explore a wider variety of gender identity. According to THR, the series will include non-binary and intersex characters as well as cis-gendered individuals.   The following are Clark and Landgraf’s original statements:

Clark: “What was exciting about the book was it takes this kind of idea that a world filled with mostly women … is not necessarily a paradise. Because women uphold systems of oppression — like patriarchy and white supremacy and capitalism. And that can be explored within that. Because gender is diverse and chromosomes are not equal to gender. So in our world of the show, every living mammal with a Y chromosome dies. Tragically, that includes many women. It includes nonbinary people and includes intersex people. But that’s also true of the survivors. I think every single person who is working on the show — from the writers to the directors to the cast and the crew — are making a show that affirms that trans women are women, trans men are men, nonbinary people are nonbinary, and that is part of the sort of richness of the world we get to play with.”

Landgraf: “Even the show’s title has to be explained and contextualized in a much different way than it was. We’ve worked really closely with GLAAD and other organizations and taken a lot of input, and we’ve worked really hard to get that right. I’m confident when members of the trans community watch the show you will feel that nuance will be reflected.” 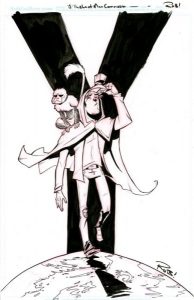 It’s nice seeing FX and the program’s creators revamping Y: The Last Man and incorporating a broader range of gender identities into the show. Such portrayal is especially significant. According to a recent American non-governmental media monitoring organization founded as a protest against defamatory coverage of LGBT people research, depictions of trans and non-binary characters in Hollywood were noticeably absent from big releases in 2020, despite increased ethnic diversity in LGBTQ+ characters.

Let’s hope the audience won’t overreact, and nobody feels failed due to Landgraf and Clark sayings, the program is attempting to support the LGBTQ+ community. However, the fact that GLAAD and other organizations have collaborated with FX on this subject is comforting.

We can only guess what awaits us at the time, and we will have to wait until Y: The Last Man arrives on FX+ on Hulu on September 13th.