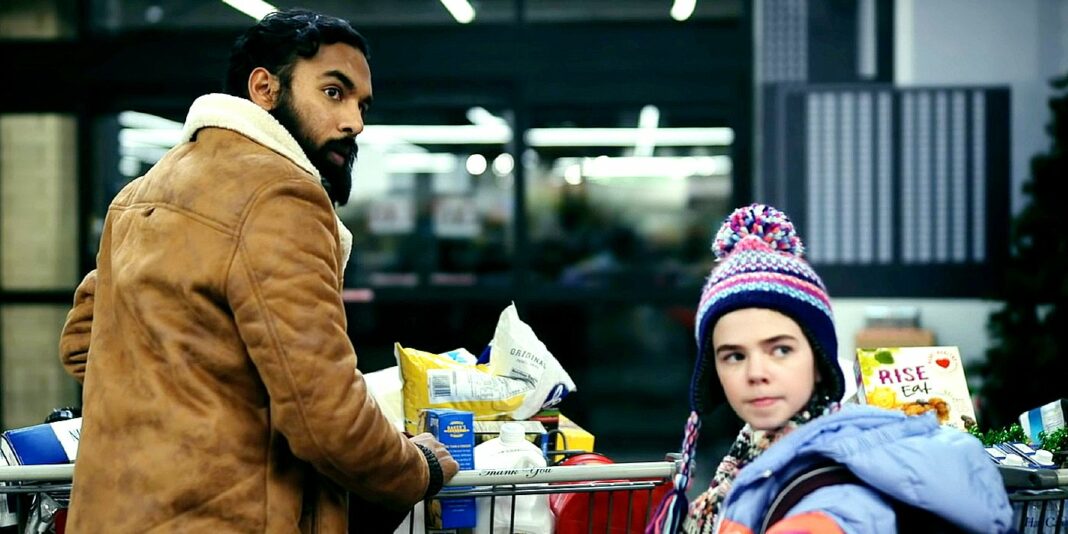 Emily St. is a street in New York City. “The bright side of the globe slides toward darkness / And the cities are falling asleep, each in its hour,” writes poet Czesaw Miosz in the epigraph to John Mandel’s novel Station Eleven. It’s a forensic account of time passing, not of how it feels to be on Earth as the hours tick by, but of how the phenomenon appears from some inhuman vantage point. As the HBO miniseries based on Mandel’s book comes to a close, that inhuman perspective is personified. With a Route 66 mug in his space-gloved hand, a spaceman in orbit watches night crawl across his old home. Miosz’s speaker concludes, overwhelmed by what he cannot see, “There is too much world.” The spaceman’s distance has a comparable sadness: he can see the entire spinning world, but he can’t touch it.

Time jumps in difficult-to-describe ways between the period before a flu-like pandemic hits Earth, the pandemic and its immediate aftermath, and the years after the pandemic in “Station Eleven” the series (but also the book, frankly). The streets of Chicago (apologies, my book folks, but we’re not in Toronto) are packed, and the light is icy blue in scenes from before the virus strikes. The city is rewilded in the future glimpses — gorgeous but empty. There is both too much and not enough world. Art, like the novel, outlasts society. Feral pigs prowl the theater where movie star Arthur Leander (Gael Garca Bernal) previously performed King Lear, yet twenty years after the plague, his old co-star is still alive and late for a rehearsal on a sandy dune. “Station Eleven” is a show about the end of the world, but also about the future of the planet, which defies the dystopian genre’s rules by being complicated beyond survival. The first episode of the season is geared to getting us through the worst of the storm as quickly as possible.

When the episode starts, crazed Lear is still ranting through Act IV while someone texts from the front row with the keyboard clicks on. Jeevan (Himesh Patel from the musical rom-com Yesterday) is sitting nearby and notices the visible signs of a heart attack in Lear and rushes from the stalls to the stage. Jeevan, on the other hand, isn’t a doctor and doesn’t even know how to administer first aid. Arthur dies as King Lear, an act too soon, as some random person with no life-saving abilities hovers over him, pleading with someone with life-saving skills to please help. Jeevan’s girlfriend leaves without him, which is a particularly sour move. Did I mention it’s the holiday season?

Jeevan takes informal guardianship of Kirsten, an 8-year-old child performer who has been abandoned by her backstage wrangler, to avoid joining her or perhaps to compensate for his earlier ineffectiveness. Matilda Lawler is wonderful in the role of Kirsten, self-assured in the manner of a child who spends too much time with grownups, as I’m sure she is. My disarmed heart yearned for Jeevan and Kiki to be recast in a charming odd-couple comedy — like Brittany Murphy and Dakota Fanning in Uptown Girls — when it was revealed that the diminutive professional still require assistance in getting the L home. Allow them to wander around Chicago, one misadventure after another, healing each other’s hidden wounds.

Let it all come to a close with a hug and the bittersweet tears of I’ll see you around, rather than the Black Death. They charm their way through the obligatory ice-breaker scenes as if it’s even conceivable. Jeevan informs Kirsten that he will most certainly marry her, but in a tone that screams, he will not. He claims to be an unemployed blogger (or something?). “It must be difficult not knowing what you want to be,” Kiki comforts him, her voice wise.

When Jeevan’s sister Siya, an ER doctor, calls to sound the alarm, they’re on the train. A deadly disease, first diagnosed in Asia, is sweeping through Chicago. She wants him to track down their Pulitzer Prize-winning, moderately reclusive, ambiguously crippled brother, Frank, and seal his apartment off from the outside world. That is their only hope of surviving. Jeevan is on the verge of having a panic attack (he’s prone to them), but Siya consoles him by recalling childhood recollections of barfing up strawberry juice. Yoo-hoo. It’s a gruesome, heavy-handed send-off for a figure we’ll never meet. She’s coughing by the time we see her briefing a room of children on the health of their ailing parents. Jeevan offers to assist Frank in his search. He simply has to drop Kirsten off on the way.

When they arrive at Kirsten’s house, though, her parents do not answer the phone — a terrible absence. Jeevan drags her along on his massive apocalyptic supply run, which includes six carts of groceries, wine, and Yoo-hoo. (In a brief moment of social criticism, the store clerk refuses to pay the $10,000 charge by check because money won’t be available tomorrow.) Jeevan is hesitant to divulge what’s going on with his young charge, but Kirsten is astute. She’s starting to feel uneasy about being out so late with a stranger who is holding secrets from her. Kirsten’s level of understanding when they transport the goods to Frank’s posh high-rise with water views is: she understands the world is ending, but she doesn’t know-know.

That is, until Jeevan confronts his hesitant brother, Frank (Nabhaan Rizwan from Amazon Prime’s superb Informer), with the truth. When a commercial airliner nosedives into Navy Pier, just beyond Frank’s floor-to-ceiling windows, Frank is in the midst of disbelieving Jeevan’s secondhand apocalypse bulletin. Jeevan shuts the front door and duct tapes it shut without saying anything, not knowing when he’ll open it again. Siya calls again, but her final words are drowned out by those of others saying their goodbyes, leaving notes for loved ones who may be in other beds, in other hospitals, leaving the same messages no one will ever hear.

The door to Frank’s condo, it turns out, stays shut for 80 days. There is no power in the building and no Frank when it reopens. While Bob Dylan’s “Don’t Think Twice, It’s All Right” plays, Jeevan and Kirsten start out with laden rucksacks and flashlights. The roads are jammed with cars that have come to a halt. Snow has enveloped the city. I’m driving on the wrong side of the road. A spaceman is stranded on his shuttle in the stratosphere, waiting for word from Earth. I’ll be gone as soon as you look out your window. Why did they leave at this time? What do they require, or what do they understand? Jeevan and Kirsten are on their way to the lake.

The story of Jeevan and Kirsten takes up the majority of the first episode, however, there is a parallel timeline that begins 10 days before they meet. Miranda (Danielle Deadwyler) is in Chicago, and for the first time in a long time, she visits Arthur Leander. She’d like to present him with a copy of “Station Eleven”, the graphic novel she’s finally completed. The details of their relationship are murky, but she stares warily at Kirsten, who is coloring on the floor of Arthur’s dressing room as if she is a daughter she is unaware of or a daughter they could have had. When Kirsten inquires about the gloomy spaceman staring down at the silent Earth on the book’s cover, Arthur informs her that he is the jerk who ruined his life. I’m not sure if that’s the complete story, but Miranda lets it go. She’ll be on the list of those who will get a call if Arthur dies on stage.

The jumping timeframes have no pattern, but the noises of trains rumbling on the tracks accompany them. Views from the past are juxtaposed with scenes from Chicago’s bright future (those palm fronds are far too large to grow in the temperate forest biome). Kirsten’s family brownstone, like the theater and the L station where Kirsten and Jeevan swap personal histories, will be returned to nature in the future. The episode finishes with the last jump that isn’t preceded by a title card. As someone calls Kirsten to rehearsal, she is all grown up and reading Miranda’s “Station Eleven”. Civilization, as we know it, maybe extinct, but the Earth is as green as Eden, and humans have reverted to their most basic instincts: survival and the desire to create new things.