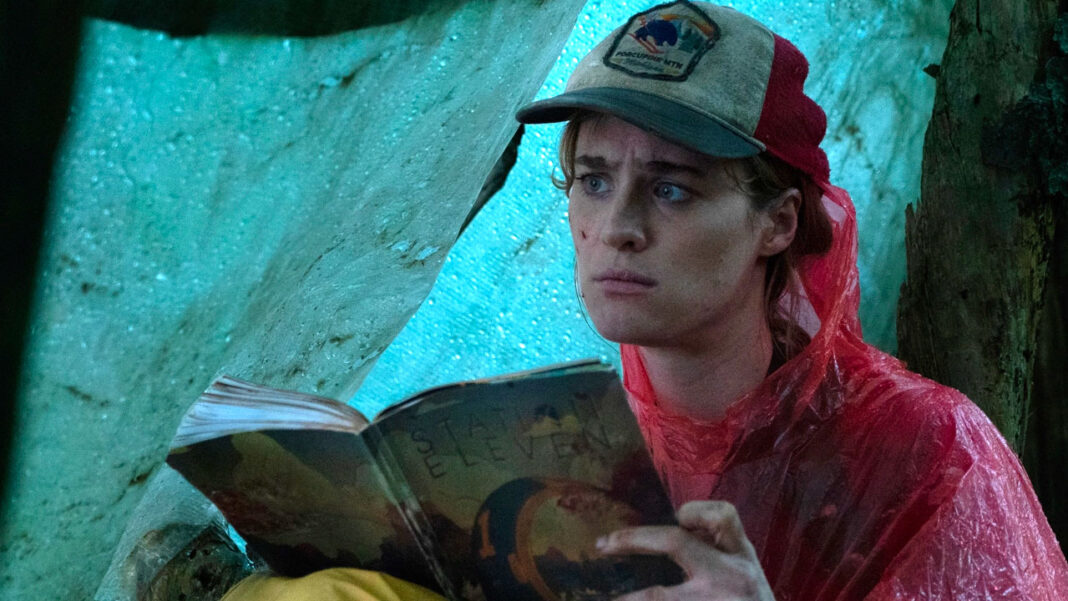 I understand what you’re going to say about “Station Eleven”. The last thing you want to do after nearly two years of going through a pandemic in real life is watching a show about a pandemic.

But here’s the thing: you’re wrong. I say this with the deepest respect and affection. “Station Eleven”, a limited series based on Emily St. John Mandel’s excellent and eerily predictive 2014 novel, is a must-see, not in spite of but because of the stress we’ve had in 2020 and 2021. “Station Eleven” is a beautifully wrought piece of storytelling created by Patrick Somerville, whose previous credits include Made for Love, Maniac, and, most tellingly, The Leftovers. It will certainly remind audiences of the coronavirus — it focuses on the flu that spreads rapidly, causing panic, quarantining, and a massive loss of life — but it also presents a much more extreme version of a pandemic than the one we’ve faced.

The disease in this HBO Max series, which premieres its first three episodes on Thursday, starts killing people and destroying fundamental infrastructure so quickly that it doesn’t seem exaggerated when it’s characterized as “the end of the world.” (Audio from a television report mentions that the flu has a one-in-1,000 survival rate and that Chicago, where the series is based, “is not Chicago anymore.”) It’s only 2.5 million people.” Despite this, “Station Eleven” is an uplifting reaffirmation of the worth of life and human connection, arguing that even in the most terrible of situations, Americans can and will come together to support one another.

Somerville and his co-writers have done an excellent job of interpreting Mandel’s work, keeping key elements while removing others and reshaping the narrative to make these series work as both a postapocalyptic account and a commentary on the role of art in sustaining and fortifying the human spirit in times of crisis. Given the presence of Somerville and executive producer-writer Nick Cuse, another alum of The Leftovers, it’s no surprise that “Station Eleven’s” tone is similar to that of that HBO drama, another affecting picture of what happens after a tragedy. “Station Eleven”, like The Leftovers, makes no attempt to explain its catalytic event — we never discover how this flu spread so swiftly or why it couldn’t be contained. These ten episodes are significantly more focused in how people cope after losing practically everyone they care about and everything that was once familiar to them.

The series begins with actor Arthur Leander (Gael Garca Bernal) collapsing onstage in the middle of a play of King Lear, much like the text does. An audience member, Jeevan (Himesh Patel), is one of the first to see what is happening to Arthur — and the only person in the ensuing pandemonium to take one of the cast’s young members, Kirsten (Matilda Lawler), under his wing and assist her in getting home from the theater. Unfortunately, when the contagion and rumors about it spread, the meaning of home fundamentally shifts, forcing Jeevan and his brother, Frank (Nabhaan Rizwan), to step in as Kirsten’s guardians.

“Station Eleven” moves in all directions on its x-y axis, moving forward in time 20 years, when we meet adult Kirsten (Mackenzie Davis) on the road with a roving band of actors and musicians known as the Traveling Symphony, and back in time to the outbreak’s beginnings as well as events that preceded it. A number of shows have attempted to adopt a similar time-jumping framework this year, with varying degrees of success, but few have succeeded with the same feeling of purpose and elegance as Station Eleven. Most of us have learned in the two years we’ve been living with COVID that our sense of time becomes highly warped during a pandemic. Days, months, and years all blend into one another. They do so as well in “Station Eleven”, where images of a barely occupied, overgrown Chicago two decades in the future are woven into scenes where the flu has just begun and the city appears to be normal. What happens in 2040 is infused with dialogue from conversations that took place years before.

Despite the fact that there is a clear distinction between pre- and post-pandemic existence, the series underscores how history continues to repeat itself and sneak into the present, even when we believe it has all been packed away. Hiro Murai, Jeremy Podeswa, Helen Shaver, and Lucy Tcherniak, the series’ four filmmakers, lean into the overlapping, almost dreamy aspect without forsaking the severe realities of existing without contemporary means.

The focus shifts to multiple characters within the massive ensemble, including Clark (David Wilmot), a friend of Arthur’s who is on his way to retrieve his body when all hell breaks loose; Elizabeth (Caitlin FitzGerald), an actress with whom Arthur has a child and who eventually becomes linked to Clark; the Conductor (Lori Petty), the outspoken, quietly heartbroken leader of the Symphony; and Alex (Philippine Velge), a member of the troupe.

Miranda’s comic, which was passed down to Kirsten in the early days of the pandemic, recurs throughout the episodes as if its lyrics were biblical. “I remember harm,” says one character, while another says, “I don’t want to live the wrong life and then die.” While these statements are from the graphic novel, they are a reflection of how literature and art may feel as if they’ve been tuned particularly to the present and the shapes of one’s own private heart.

This is a recurring theme in the series, whether it’s when the Symphony’s actors find transcendence through Shakespeare, or when Frank performs a rap he spent days writing, or when young Kirsten sings “The First Noel” softly but joyfully at a particularly bleak turning point a few days before Christmas. (While all of the performances in this series are amazing, I can’t emphasize enough how grounded and pure Lawler is in this one.) She’s incredible, and she plays Davis in a 1.0 version that’s completely convincing.) Music, theater, and literature can give an escape from our circumstances as well as a means of digesting them that is inextricably linked to them.

Nothing better exemplifies this than Kirsten’s love for the comic Station Eleven, which she regards as both a link to the past and a method of escaping the chains of time. In episode eight, the elder Kirsten says, “Arthur gave me Station Eleven.” “It didn’t matter to me that the world was ending when I read it.” Because it was the entire universe.”

The fact that Kirsten and others find such joy and significance in “Station Eleven”, the graphic novel, amid a pandemic is made even more poignant when one considers that “Station Eleven”, the HBO Max version, accomplishes something similar for us during our own pandemic. Even though COVID is still present, our planet is not coming to an end. However, when you immerse yourself in “Station Eleven”, it truly becomes the whole wide globe. What a blessing.