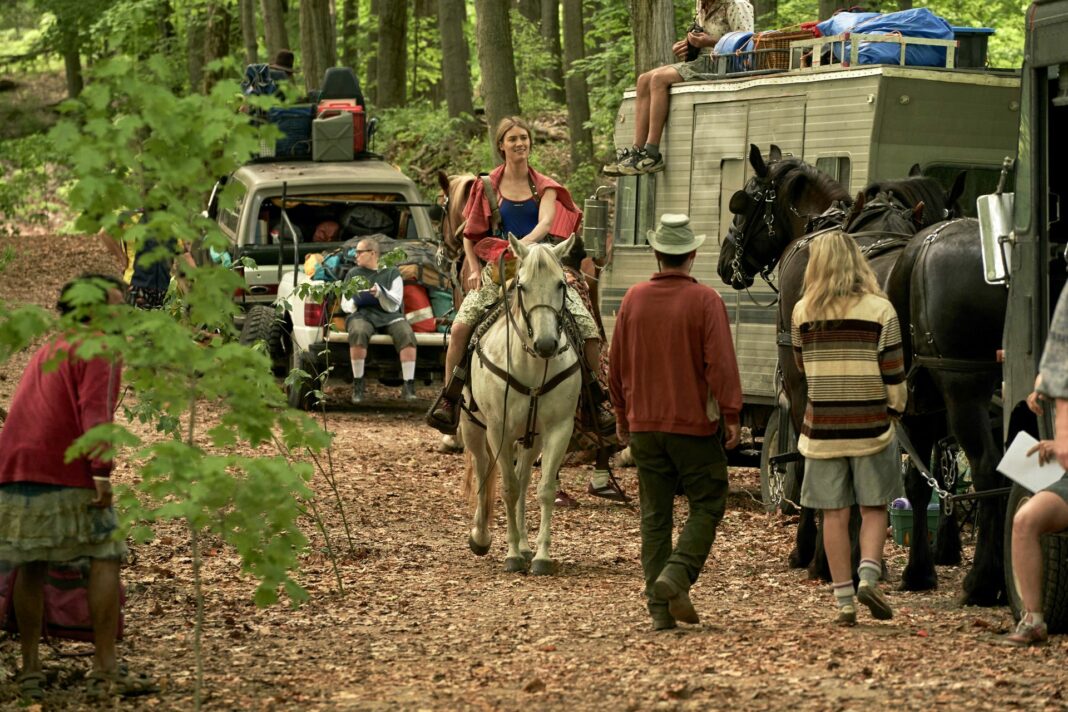 Kirsten Raymonde (as an adult, played by Mackenzie Davis) wanders northern Michigan with a group of traveling actors she met in Year Two. That’s when the players discovered her, thirsty and bloodied, holding Miranda’s soiled comic novel.

In a ramshackle caravan of horses, wagons, and camper vans, the band of around two dozen actors and musicians travels between settlements, performing Shakespeare to some of the last audiences on Earth. Their path is always the same. They bring additional baggage to the locations they’ve already traveled through with each return. Time leaped in the “Station Eleven” series debut, but time slips here.

Kirsten’s mind was blown by a maelstrom of loose associations triggered by the familiarity of the road and her decades of performing Hamlet. An area of forest recalls her of Jeevan’s mysterious departure, and the grieving of elderly Hamlet on stage reminds her of her own orphanage. It’s never made clear whether her flashbacks are deliberate or unintentional, if she’s using her tragedy to create art or if the past simply haunts her.

When Kirsten meets Sarah (Lori Petty), the group’s conductor, she is just ten years old. Because this is the hardscrabble frontier, they draw on each other, but Sarah lowers her weapon first when she realizes Kirsten’s age. Sarah reveals that she used to be a musician. Perhaps this is how they greet each other in their hazy world: You exchange names first, then do the final known thing before society collapses. “I used to be a Shakespearean actor,” Kirsten explains. It was a fantastic match. Kirsten then adds something new, a mix of gibberish and pathos.

“When we fix the ship” — what ship are we talking about? — “I’m going to bid Arthur, Jeevan, and my younger brother farewell. “His name was Frank” – is this the same Frank as Jeevan’s younger brother? “Dr. Eleven has no sense of time,” says the narrator. When Sarah says she’s been alone for a time, Kirsten responds cryptically, her own story becoming mixed up with the one that’s kept her company. Suddenly, our alien is given a name.

The Travelling Symphony eventually arrives at the imaginary town of St. Deborah by the Water amid fanfare and applause in Year Twenty, which I presume is our “today,” but Kirsten foregoes the happy greeting in favor of plundering abandoned houses with Alex. Alex is a post-pandemic baby who is still young. They discover an iPhone among the ruins, which Kirsten tries to explain. She informs Alex that the phone could store all of the plays she’s ever wanted to read and call everyone on the planet.

Uber is described by Kirsten. She also claims, somewhat contradictorily, that phones were not all that fantastic. The phone recalls Kirsten of the first night she spent at Frank’s apartment, stalker-calling her parents as her new caregiver doom-scrolled nearby, much as the chilly slide of swimming in Lake Michigan triggers memories of marching over its frozen surface with Jeevan in Year Zero.

Kirsten’s present is continually referencing the past, forging linkages that, given how little knowledge we have, are still a little perplexing. She finds dried reeds wrapped in the same little form she had tattooed on her palm when she does a perimeter sweep of the camp, for example. Is it possible that she created the symbol and left it behind on one of her prior trips down the coast? Is it possible that it was left by someone else… or perhaps for her?

Kirsten’s shaky grasp of the present can make her difficult to trust. The group meets a nameless vagrant with strong Charles Manson vibes and his kid, Cody, who is definitely too old to be his own son in St. Deb’s. When the drifter (Charles Zovatto) mentions his departed wife, she becomes suspicious and ignores his offered munchies.

Is it a general apprehension of strangers, or have her survival instincts been heightened as a result of her ordeal? Kirsten learns before the evening’s performance that her pregnant closest friend, Charlie, will be staying behind for a year; the wide road is no place for a baby. Kirsten throws a fit, but is she just being selfish, or is there something ominous lurking nearby?

The show must go on in any case. Kirsten describes the screeching pain she felt when she heard both of her parents were dead while onstage as Hamlet. (The hospital sends a text message; perhaps phones weren’t that amazing back then.) We’re not sure if she summons the moment in order to serve Hamlet’s grieving or if becoming Hamlet stirs it up. When Kirsten claims to despise the play hours before the performance, Charlie insists it’s just part of her creative process. Is this also her process — acting as catharsis? The wanderer later informs Kirsten that she has been charged with Day Zero suffering, “as if you never left.” Perhaps acting re-enacts the trauma, preventing it from fading into the past.

The Symphony plays by torchlight after the performance, and the mood at the campsite is festive with a sense of pandemonium (torches are a cinematic shorthand for chaos). While the Traveling Symphony performed Hamlet, Charlie gave birth to a healthy baby girl in an incredibly quick and uncomplicated manner. Kirsten softens when she holds the baby. “I want everything to be different for her,” Charlie says to Kirsten, implying that she wishes to spare her daughter the agony that Kirsten has when people leave her life.

Everyone in Year Twenty has lost loved ones, but there’s a growing suspicion that whatever happened to Kirsten was even worse. She recalls reading “Station Eleven” with Frank on the floor of the hallway closet as the others danced, drank, and sang, and she recalls shouting at the top of her lungs for him from the same floor.

Kirsten eventually approaches the suspicious drifter, who claims to have visited Mackinac Island but mispronounces the name and eats hen-of-the-woods mushrooms that don’t grow where he claims to have visited. He wants to join the Symphony on the road, but he doesn’t tell why, and there’s no way Kirsten would say yes under those circumstances. She stabs him in the gut with a switchblade after he threatens to “eliminate” her companions unless she submits, which seems appropriate considering the situation of the world.

But there’s something else about him that’s more terrifying than his threats: he knows Miranda’s “Station Eleven” by heart. He’s aware of them, despite her belief that she held the only copy. They have significance for him. Then she makes the typical episode two error of failing to finish him off, leaving us with a crippled villain on the loose as Charlie plans to spend time away from the troupe’s protection.

We only get to see Kirsten’s reveries, but she’s not the only one who has an uneasy relationship with the past. Sarah is approached by a guy who invites the troupe to perform in his secluded village, The Museum of Civilization. Despite working for a firm that specializes in performing some of the world’s oldest tragedies, she says no — “screw the past.”

On the journey to St. Deb’s, an actor named Dan begs to audition for the Traveling Symphony, and the group, who have dedicated their lives to Shakespeare, beg him to do something else. He delivers the famous Bill Pullman monologue from Independence Day, despite the fact that the audience is so young that it’s unlikely that many of them have heard the original before the flu put an end to the streaming wars. It’s spanking new to them.

Hamlet attesting to his declining sanity — “When the wind is southerly, I recognize a hawk from a handsaw” — and President Whitmore’s fighter pilot address are examples of cultures that have survived. People in distress want for the old and finest, while fresh and exotic delights them.

Dan, needless to say, crushes it. It’s his third audition, and he’s finally accepted into their elite touring band. People still want things and want to work for them, no matter how little and difficult the world has become. People have objectives beyond making it to tomorrow two decades after the collapse of civilization.