The Recruiter is the only character in “Squid Game” who does not wear a mask, and the reason for this is most likely due to his position within the company. Though the show has similarities to The Hunger Games on the surface, “Squid Game” has its own themes, one of which is anonymity. As a representation of this, masks play a vital role in “Squid Game’s” message, making a statement about personal identity. Despite this, the Recruiter’s face is visible, whereas every other non-player character in “Squid Game“ is required to wear a mask. The Recruiter’s exposed face must be deliberate in a program with such meticulous plotting.

“Squid Game” is a popular Netflix show in South Korea about desperate people who are lured into death games by the promise of a large financial award. In episode 1, the Recruiter (Gong Yoo) approaches the protagonist Seong Gi-hun (Lee Jung-jae), who is sitting on a train bench, unhappy over his money problems. The Recruiter, far from being veiled, smiles Gi-hun openly. The Recruiter persuades Gi-hun to intensify his poor circumstances and enter the games using a combination of gambling and slapping, kicking off the main plot of the episode.

Masks signify the anonymity of a malevolent organization in Squid Game: the “faceless corporation.” The devastating nature of wealth inequity under the invincible power of mega-corporations is addressed by “Squid Games”. Even though the players are vulnerable, even dying, the corporation (the games) must be protected (behind masks). The Front Man, who is in charge of the crew, wears a mask at all times and only takes it off on rare occasions. In “Squid Game”, the guards also wear masks, presumably to protect themselves, and are murdered if they take them off.

Even the VIPs who come to watch the bloodbath wear masks to conceal their identity. In terms of the plot, it would be simple to find an explanation for the Recruiter to hide his identity in public: medical masks are widespread in Korea, or he could simply wear a hat and sunglasses. The Recruiter, on the other hand, does not require a disguise to maintain the show’s themes. His mask is the smiling face. 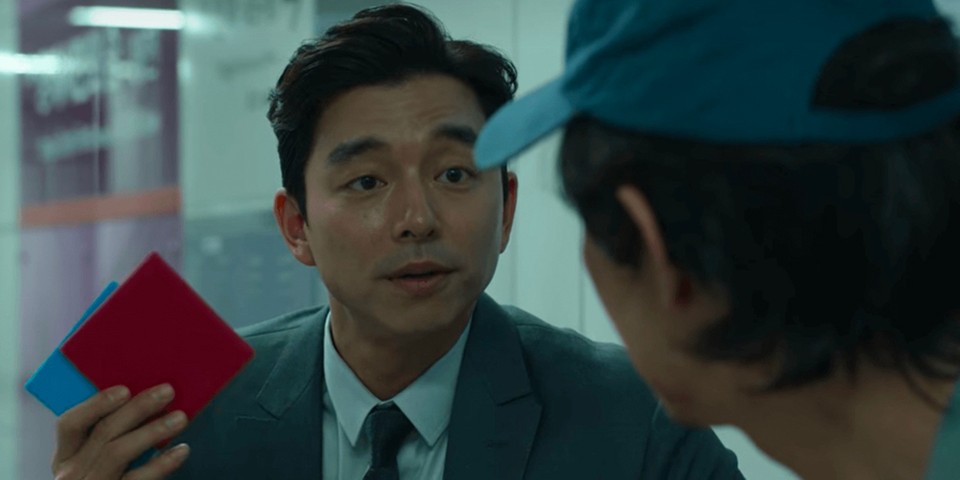 “Squid Games” is about people who are motivated to fight against fatal odds in the misguided ambition of becoming wealthy, which leads to horrific murders and murder-suicide incidents (such as player 212’s death), all in the name of entertaining wealthy VIPs. If the games are meant to be an analogy for capitalism’s trappings and the abuses of wealth disparities, then making the characters’ faces welcoming and smiling is in line with corporate branding. The ominous “faceless corporation’s” essential feature is that it appears to be harmless from the outside.

The Recruiter is the first point of contact for potential players, who are most keen to play the games. As a result, a cheerful face promising the opportunity to rise from poverty to riches is an exploitative strategy. The player is trapped in an oppressive environment from which they have no way out, and their only option is to obtain fortune by any means necessary – or perish.

The player’s expressions, such as those of Kim Joo-player ryoung’s 212, whose unknown age and over-the-top antics are highlights of the series, provide a lot of the drama in the “Squid Game”. The way the Recruiter hurried away from Gi-hun in the final episode added another dimension of performance to the character, implying that there is more to the character than what was disclosed in season 1. Given how the first season of Squid Game ended, only a few characters could return in a second season, and the Recruiter would make a superb villain.