“Squid Game” has surpassed Bridgerton as Netflix’s most popular original series in less than a month since its debut. Ted Sarandos, co-CEO of Netflix, predicted that “Squid Game” will become the streaming service’s most-watched show, and his prediction has come true. The series has remained at No. 1 in Netflix’s “Top 10” category since its release, including in the United States – the first South Korean production to accomplish so. The show’s sharp social commentary and well-written characters have proven to be popular with viewers all around the world.

The series follows Seong Gi-hun (Lee Jung-jae), a down-on-his-luck protagonist, as he competes in a series of games for a grand prize of 45.6 billion KRW (about $38.7 million USD). The show’s numerous challenges are based on famous children’s games in South Korea, such as red light, green light (or “Mugunghwa kkochi pieotsumnida” – “the mugunghwa flower has bloomed” in the original Korean context). In a similar vein to survival thriller films like Battle Royale and The Hunger Games, those who fail to complete the challenges are killed. The series immediately became a pop cultural sensation, creating a slew of memes and even influencing Halloween costume sales among fans of the “Squid Game“.

Check out the full excerpt below:

Netflix said it would happen and now it finally has. “Squid Game” has become the biggest TV series in the streaming service’s history, and it frankly wasn’t even a close race.

The South Korean-produced thriller has been viewed by 111 million accounts since its Sept. 17 launch. To put that in perspective, the previous record holder was Shonda Rhimes’ “Bridgerton,” which notched views from 82 million accounts within its first 28 days. “Squid Game” is Netflix’s first to reach 100 million viewers within its premiere window.

It should be noted that Netflix counts a view as someone who watched at least two minutes, so we don’t know how many of those 111 million accounts finished the series. But it’s a hit for Netflix nonetheless. 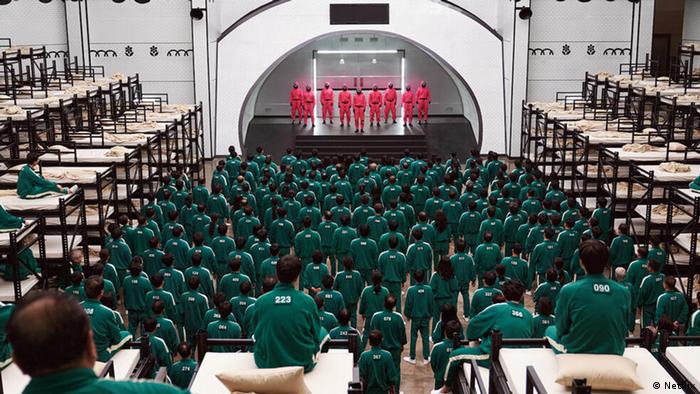 “Squid Game’s” sudden success with worldwide audiences is surprising, especially given that it is a completely unique IP with a cast that is virtually exclusively Korean. Furthermore, Netflix did not devote a significant amount of resources to advertising the series, at least not in the months leading up to and immediately following its release. As a result, it’s safe to assume that “Squid Game’s” present success is nearly completely based on word-of-mouth from fans who watched and appreciated the series enough to talk about it long after the credits had rolled.

An explosion of South Korean series and films has achieved breaking worldwide success in recent years, perhaps culminating with Bong Joon-Parasite ho’s winning Best Picture at the 2020 Academy Awards. With streaming rapidly becoming the major method for media consumption in the twenty-first century, consumers now have access to a vast library of entertainment. Hopefully, the success of “Squid Game” will encourage streaming services to engage in other risky projects that don’t exactly fit the Hollywood pattern.