The contestants in “Squid Game” episode 7 play a perplexing game in which they walk on a glass bridge with defective steps, but what is the true task and what inspired it? “Squid Game” follows Seong Gi-hun as he and 455 other debt-ridden people are recruited to participate in death games based on popular South Korean children’s games. The competitors willingly enter the “Squid Game”, where they must win all six games in order to earn the prize money of $45.6 billion, with the penalty of death if they lose or break the rules.

“Squid Game‘s” initial game is the well-known Red Light, Green Light, in which players can advance while on a green light and lose if they are caught moving on a red light. The task comes with a caveat: if a player is detected moving by “Squid Game’s” enormous doll, they will be shot to death with sniper rifles right away. This is how the “Squid Game” progresses, with a loss in the honeycomb game signaling death if one does not finish or breaks their shape, a defeat in the tug of war game signaling the death of an entire team, and a loss in the marble match signaling execution by the staff. Except for “Squid Game” episode 7’s game 5, which has a more vague equivalent game, all of the activities are from named, popular South Korean children’s games.

The remaining 16 players choose numbers that correspond to the sequence in which they begin the game in Challenge 5 of the “Squid Game”. The intermediate numbers move rapidly, while the beginning and last numbers take longer to choose because no one knows what the task is. The fifth game takes place on an elevated glass bridge, and the “Squid Game” characters must jump to one of the two adjacent glass platforms to cross the bridge.

The first platform is solid glass, while the second is tempered glass that shatters when stepped on. The game is more difficult for those who go first and easier for those who go last because they can see where others have successfully trod before them. The assignment deviates from a clearly comparable children’s game, with the influences appearing to be a mix of Stepping Stones and Hopscotch, albeit the game is more unfair because it is based on chance. 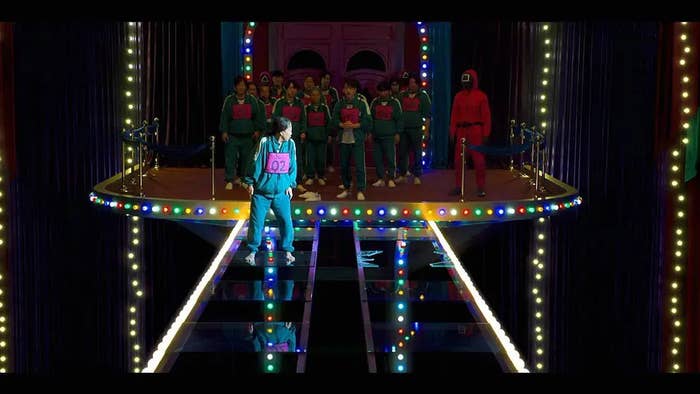 Some have speculated that the game is a larger version of Korean Chess, although when considering the rules and consequences of stepping stones, “Squid Game’s” difficulty more closely resembles that of the latter and hopscotch, which has a similar foundation. Stepping Stones is a children’s game in which a trail of cardboard or paper pieces is laid up and the players are only permitted to walk on the “stepping stones.”

A proctor will normally give the players a predefined pattern to remember, and if they do it incorrectly, they will be punished with a false “shark attack” or another penalty that will take them out of the game. There’s also an extra rule in “Squid Game’s” version that says if players are still on the stones when the timer runs out, they’ll be “devoured.”

The rules of stepping stones can be a little complicated for those who have never played before, which is why it’s been difficult for many to figure out exactly what the game is. The element of “Squid Game’s” high-stakes game that really differs from Stepping Stones’ rules is that they weren’t given an order to memorize ahead of time; “Squid Game” is just trial and error.

Because it’s unclear what the real-life rules of Stepping Stones are and how they compare to the ones in the show, some fans have attempted to exploit loopholes in order to win, even if it means breaching the rules. Many people have wondered why the players couldn’t simply walk on the rails that separate the glass steps, despite the fact that the real rules of Stepping Stones state that you can only walk on the stones, so walking on the rail would be considered breaking the rules and, in the case of “Squid Game”, death as elimination.