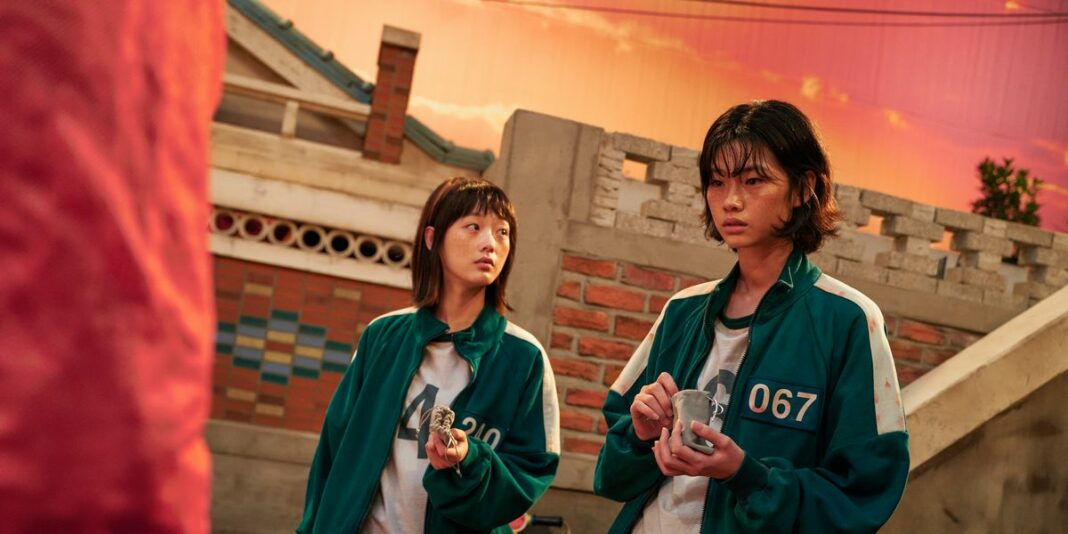 Jung recently shared a behind-the-scenes glimpse at what appears to be a test shoot from April 2020 on her Instagram account (the caption reads “text shoot,” though “text” may be a typo for “test”). Both videos show Jung posing against static backgrounds reminiscent of “Squid Game’s” colorful battlefields through the lens of a camera monitor. The first film features her clothed in civilian clothes against a cloudy backdrop, while the second features her in her trademark green jumpsuit – emblazoned with her player designation number of 067 – in front of a sunset backdrop similar to that seen in episode 6, “Gganbu.” Two more costumed figures stand to each side of her in the latter clip, most likely Ji-young (Lee Yoo-mi) and Ali (Anupam Tripathi) based on what little can be seen of their player numbers. Take a look at the following clips:

What sticks out right away, especially in the second clip, is how much the actors are able to convey simply with their body language. Jung’s somber demeanor, like Lee Yoo-restlessness mi’s and Tripathi’s shyness, immediately reflect the nature of the character she plays. The criticisms expressed at some of “Squid Game’s” performances are mostly avoided by these three actors.

Season 2 will reveal whether or not the show’s brilliant casting choices were a once-in-a-lifetime opportunity. The bulk of season 1’s most beloved characters, including Sae-byeok, will not be allowed to return due to their characters being killed off in the program. As a result, the casting department for Season 2 will have to start from scratch with an entirely new cast of characters; ideally, they will be able to rekindle the magic of “Squid Game’s” renowned first season.