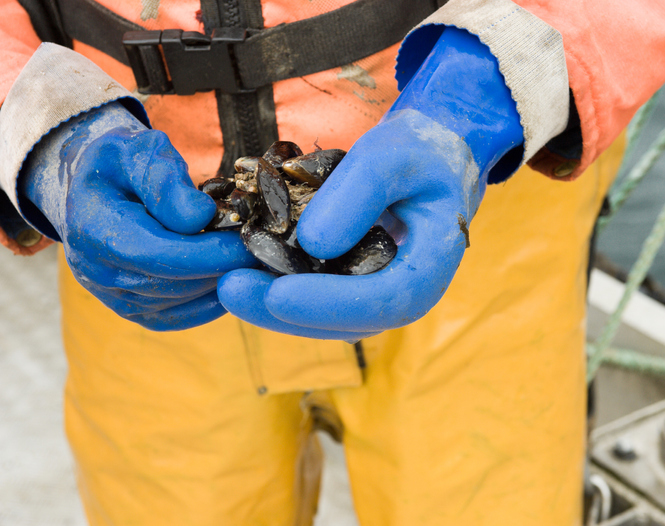 Researchers in Scotland have therefore investigated how mussel larvae move in order to give mussel and other shellfish farmers important insights into where and how to grow them.

The discovery: it’s all about the current.

The University of Stirling’s Institute of Aquaculture used genetic testing of mussels at sample sites along Scotland’s west coast combined with mathematical modelling to understand where mussels grow well.

The team discovered that mussel larvae move in the currents, from south to north. “We found that, in 30 days, a cloud of larvae can move from the Scottish border near Stranraer up to Islay [about 80 miles] for example. They then attach to substrate – anything solid in the water, which could be ropes – and grow for one and a half years until they start reproducing. The next generation of larvae is carried on the current from Islay to the Outer Hebrides in 30 days – that’s a lot further, because the current is faster there.”​

She added: “Knowing where mussels come from and where they go tells us a lot about the best and worst locations for farms.”​

The researchers worked with the Scottish Association of Marine Science, as well as mussel farms at different west coast locations, through the Fishmongers’ Company, Scottish Sea Farms Ltd and Association of Scottish Seafood Growers. They discovered, for example, that larvae from Loch Eil farm leave the loch, but no new larvae come in, so although Loch Eil has a self-sustaining population, it also contributes to populations at other locations, such as Loch Linnhe.

Corrochano-Fraile’s supervisor, computational biologist Dr Michaël Bekaert, said: “We were surprised by how fast the larvae moved in a short amount of time, and also how fragile and vulnerable they are.​

“The research shows that if we were to block the current in some way between Scotland and Northern Ireland, or slow it down, we would lose larvae. Similarly, if we were to pollute the sea there, or somewhere like Loch Linnhe, where many fresh larvae are washing in, that would have a huge impact. To breed quality mussels, like with anything else, you need maximum diversity in the genes, so you don’t want to lose fresh genes by messing with the current or polluting.​

“We will need to understand the effects of climate change better, but if the current were to move much faster, for example, the larvae might be swept past the Outer Hebrides without stopping at all!”​

Forty per cent of the UK’s mussels are produced in Scotland, with half of these growing along the west coast and the rest around Shetland. Mussel farming has a low impact on the environment, as they require no food, grow on ropes and, by nature of being bivalves, they even clean the water around them.

“This does mean they are vulnerable to pollution though,”​ explained Dr Bekaert. “They will absorb heavy metals, for example. If we give them rubbish to eat, they keep it. But if these fast-flowing waters are clean, the mussels are clean.​

“It is possible to produce a lot of mussels at very low cost – environmental and economic. The most expensive part is harvesting and processing them.”​

Dr Bekaert added: “This level of detailed oceanographic information is also relevant to other valuable bivalves such as scallops and oysters and, being at a scale of metres rather than kilometres, is even useful for the salmon industry.”​

The paper, ‘Predictive biophysical models of bivalve larvae dispersal in Scotland’​, is published in the journal Frontiers in Marine Science.

Previous article‘It’s critical for the development of the child’: How gut health is pioneering innovation in infant formula development
Next articleThe Top 34 Best Simpsons Episodes

What has Towa hidden in time rifts in Xenoverse 2?