Recap of the Midseason Finale of Gossip Girl: The Parental Is Political 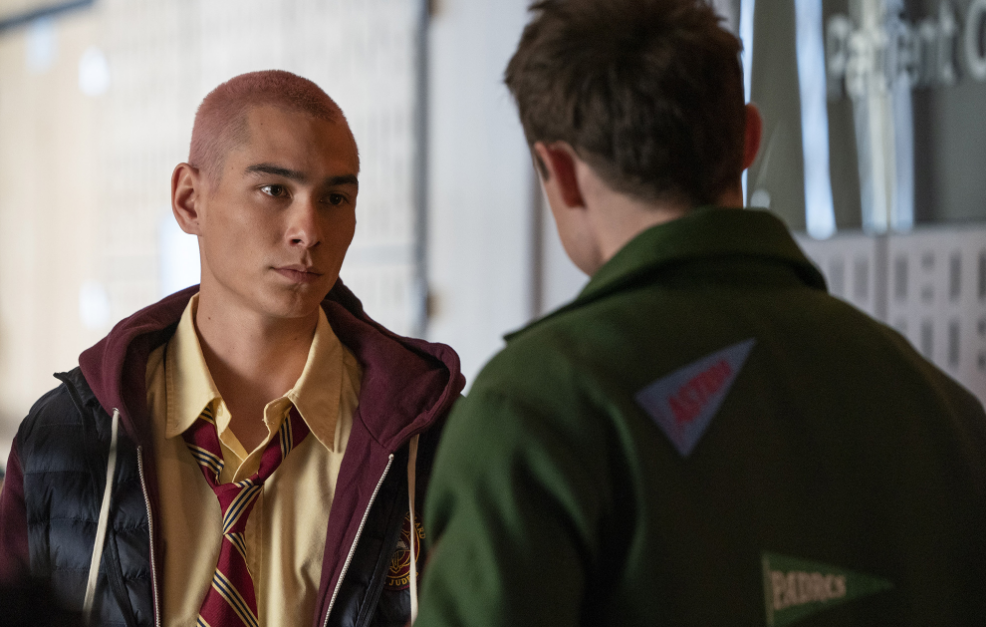 Pat yourselves on the back for staying on the shaky, unstable roller coaster that is Gossip Girl 2.0, whether for masochistic reasons, wanting to see Luke Kirby in a bomber jacket, or otherwise. Given the number of narrative holes, abandoned storylines, and lazy Serena and Blair references we’ve had to deal with, getting to the halfway mark of this season is a minor achievement. So, kudos to you!

Despite the fact that this week’s episode is still, well, not excellent, we can at least catch our breath with an hour that isn’t crammed with narrative and really commits to following out the storylines it created for our characters previously. Well, the storyline-driven characters, which gets me back to Julien. Unfortunately, six episodes in, the program still hasn’t figured out what it wants to do with her or why she’s the protagonist. This week, we learned that this purported “influencer” had never shared a sponsored piece since she doesn’t work with businesses, which makes no sense.

It’s hard to believe that a gorgeous fashion influencer with enough clout to appear on TMZ isn’t making any money! It also doesn’t make sense that her power-hungry, social-media-savvy henchmen weren’t pressuring her to work with businesses in order to boost her own image. Julien claims she has turned down remuneration since her father supports her financially, yet even the wealthiest babies, even real infants, are making money by selling cleanse smoothies and teeth-whitening goods!

Julien is yearning for anything to do, and the authors are aware of this. Rather than returning to any of her previous narrative threads, such as her father’s new girlfriend or her recent breakup with Monet, we’re forced to watch her meet with representatives from Glossier and L’Oréal to explore possible collaborations with her father. It’s some of the most sleep-inducing programming I’ve ever seen on television. Nothing is more aggravating than discovering that the person we were led to believe was a girlboss isn’t one!

Speaking of this show’s commitment difficulties, I was surprised to see that this episode explores Obie’s tumultuous connection with his family, particularly his tough German mother, Helena. In terms of his socialist ideals, Zoya is still not convinced that Obie is doing the walk as well as talking the talk.

He isn’t even bold enough to inform his mother that he has a new, less wealthy, light-skinned lover. They attend a dinner thrown by Aki’s father, Roger, who controls a right-wing media empire, after Zoya practically has to force a meeting between the three of them. He’s largely present, along with Aki’s mother and Aki himself, so we can see why Aki is still in the closet.

Zoya can’t help but accuse Roger of being a wealthy jerk, as if he hasn’t heard it a million times before. There isn’t a single thing Zoya says that is technically incorrect. When she chooses to eat dinner with these terrible individuals and let Roger pay for her caviar, it feels a bit performative in the same way she has accused Obie of being performative.

Ultimately, the meal is a shambles. Helena completely disregards Zoya, and Obie is visibly humiliated by her. While everyone waits for their automobiles, Roger talks about a lawsuit his firm is facing because a CCO instructed a gay employee to stop talking about their male spouse at work.

Audrey, who is also present, advises him to be cautious when speaking, stating that “someone at the table” could be gay. Aki’s mother instantly assumes it’s Aki who has just rushed away from the scene. Outside, Obie tells Zoya that she slapped Roger “very hard.”

When Helena summons Obie to the cab to take him home, Zoya tells him to tell his mother to wait since he’s talking to his girlfriend like some sort of exam, which is crazy considering he’s only like 12 years old. He gets into the taxi, like any youngster who has a sliver of respect for their parents’ authority, and Zoya is left pouting on the sidewalk, her magnificent lion mane blowing in the breeze.

I’ve been anticipating the outcome of Keller’s mild flirtation with Nick, who is at least 43 and believes it’s okay to pursue his daughter’s 24-year-old instructor. Under the pretense of having her in his house, the entire “please be my perfectly behaved daughter’s mentor” offer is equally weird. They have another meal in this episode, and Keller offers us more history on why her nascent writing career failed.

She reportedly couldn’t take the fact that one of her graduate program colleagues received a better response from the class. This is not an acceptable or sensible excuse to give up a craft, no matter how beautifully she expresses it. It’s the equivalent of quitting out of high school basketball because you’re not as good as LeBron James. Nick, on the other hand, simply nods compassionately.

Jordan observes Keller and Nick conversing outside of his apartment, shoots a photo, and puts it on Gossip Girl, which is the most bizarre aspect of the evening. When she confronts him about it, he goes into a diatribe about how, as a journalist and Instagram account owner, she’s breaking an ethical line by befriending one of the individuals they stalk.

He asks, “Do you want to be God?” “You have to be able to rise above it all. You can’t reveal the truth if you’re involved in it!” I was disturbed by how much the writers have normalized the instructors’ ignorance and lunacy while watching this monologue, which is presented with all seriousness in the world.

Nothing they’ve said or done on this program about the Gossip Girl implementation has made any sense, and we’re simply supposed to accept their hypocrisy and inconsistencies since the writers couldn’t come up with a reasonable narrative.

Let’s go on to the most horrific, yet underappreciated, part of the episode: Rafa’s harassment of Max. While Rafa’s behavior throughout the season has creeped me out, his conduct in this episode, which included informing Gossip Girl that Max has an STI since he won’t sleep with him, was unsettling and crazy on a whole new level.

Anyway, I believe the authors are well aware of Rafa’s demonic nature, yet his appearance onscreen still feels lackluster for a high-school soap villain. All of his heinous deeds are carried out so nonchalantly. I’d want some foreboding music playing as he goes down the corridor, Max anxiously averting his gaze as they meet one other.

Even though he wants to be left alone, we don’t get the impression that Max is scared or worried by him. It’s also strange that when Max informs his father that they’ve been hooking up, he doesn’t react at all. If there’s one way to get a moral lesson into a debaucherous performance, it’s from a naturally worried parent’s lips!

Anyway, Max retaliates against Rafa for the STI rumor by uploading a video of the two of them having sex on Gossip Girl. Rafa deletes it before it can be published, then persuades Keller to let him back into the account. Max can still broadcast this video on a million other channels, but I’m sure the authors will portray his ownership of Gossip Girl as a major roadblock.

The authors had to cram a three-way makeout session between Max, Audrey, and Aki into this episode before the season vacation. Audrey’s mother also emerges from her coma in an unexpected manner. When Obie attends a rally at his parents’ new property, which may be utilized for Roger’s media firm, the dramatic finale occurs.

This is presented as a great gesture on Zoya’s behalf and a brave step on Obie’s part, but we’ve seen him attend marches on social media and discuss attending protests on this program previously, so I’m not sure why his presence is being portrayed as unique. Julien appears, which is perplexing. I’m perplexed as to what this girl cares about and what she doesn’t!

A sequence of chaotic events occurs. A reporter questions Roger about the lawsuit as he departs the facility following a tour with Helena. He quickly defends himself, claiming that because his son is homosexual, he cannot be homophobic. In a really charming way, Aki, who is present, goes up to the microphone and emphasizes that he is bisexual.

When Zoya overhears Julien and Obie conversing during the demonstration, she assumes Julien is attempting to take her boyfriend and exits the scene. Julien also receives a call from the Black-owned cosmetics business with whom she signed a contract, telling her that she must quit the demonstration. “My politics are who I am,” she answers. What? When did this happen? What are your political views, once again?

Helena tells Obie that the cops have been contacted and that he should go, but he refuses. When the cops arrive, they begin to use tear gas. Before the screen turns dark, Obie and Julien hide in an alley and kiss.

As the credits began to roll, I burst out laughing, because what the hell have we been watching for the past month?

Previous articleHouse Of The Dragon: David Horovitch Has Joined The Cast Of The Prequel To Game Of Thrones.
Next articleWe Will Have To Wait For “Gossip Girl” Season 1 Part 2 Till November

Dr. Halsey Plans To Deal With Master Chief In A “Halo” Episode 2 Clip