With the new limited series Pam & Tommy, Hulu will delve into one of the most iconic—and scandalous—celebrity couples of the modern age. The movie, directed by I, Tonya’s Craig Gillespie and starring Lily James as actress Pamela Anderson and Sebastian Stan as musician Tommy Lee, chronicles the duo’s rapid love and the bombshell release of their honeymoon sex video.

We’re gathering all the information we can about the new series as photographs from the set begin to surface (with both leads showing eerie resemblances to their real-life counterparts).

Lily James and Sebastian Stan have undergone significant transformations in preparation for their roles.

Hulu’s initial images caused a collective double-take on the Internet. James, who had previously been in films such as Cinderella and Mamma Mia! Here We Go Again, transformed into Anderson, adopting her fluffy blonde hair, thick makeup, thin brows, figure-hugging clothes, and French tips.

Stan, who portrays the Winter Soldier in the Avengers trilogy, got a similarly drastic transformation to become the Mötley Crüe drummer, which included extensive tattoos, piercings, massive jewelry, a beard, and eye makeup.

Pam’s Baywatch outfit, as well as other classic costumes, were flawlessly recreated by Lily.

While filming, James was seen emulating Anderson’s trademark Baywatch style in a red bikini on the beach, which is another tribute to the Pam & Tommy hair and makeup team. 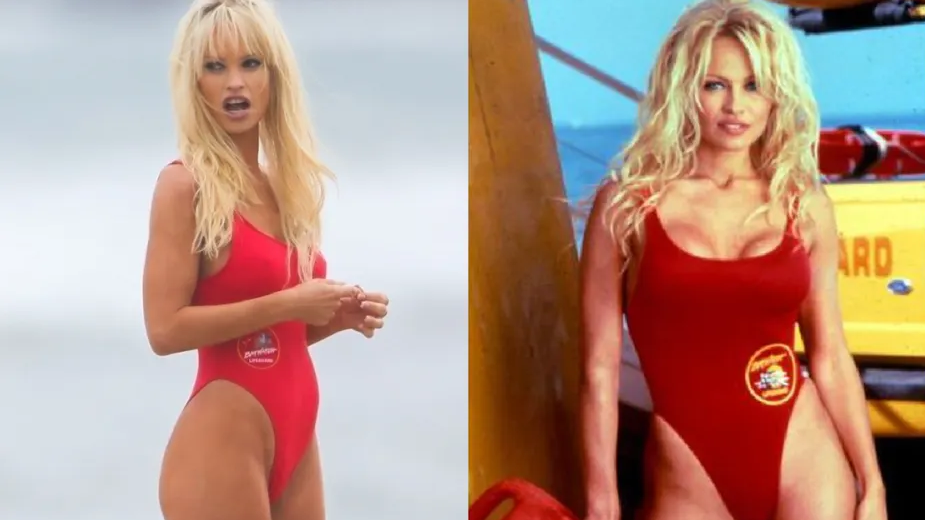 Seth Rogen is among the cast members.

He portrays the thief of Anderson’s and Lee’s sex tape. He also serves as an executive producer for the show.

There isn’t a release date set yet.

However, we do know that the eight-part series production began in the spring and ended in late July, so we’re still waiting for premiere information.

James used Instagram to mark the conclusion of the filming process, which included a few more eerie images of her Pam Anderson makeover.

The couple’s relationship will be the emphasis.

According to Deadline, while the sex tape controversy will play a major role in the story, Pam & Tommy will mostly center on Anderson and Lee’s “whirlwind relationship,” which began with them married after only knowing one other for 96 hours in 1995.

The public release of their private honeymoon film “shook the industry when it comes to celebrity privacy” and resulted in a lengthy court battle. The couple filed a lawsuit against Internet Entertainment Group, a video distribution firm, and finally negotiated a secret settlement.

Brandon Lee was born in 1996, and Dylan Lee was born in 1997. Anderson and Lee’s relationship was turbulent and subsequently turned violent, despite their rock-and-roll reputation and tabloid dominance. Lee was sentenced to six months in prison for spousal assault in 1998. According to The Los Angeles Times, Anderson filed for divorce “shortly after” the fight that resulted in Lee’s incarceration.

Pam & Tommy is not yet in development, although the former couple is allegedly aware that it is in the works.

In a May 16 Facebook post that has since been removed, Anderson’s longtime friend Courtney Love criticized the Hulu series and James’ portrayal. According to Vanity Fair, she termed the show “so fucking outrageous” and accused it of creating “complex trauma” on Anderson. Love also remembered how the actress and Lee’s sex tape was taken in real life: “It was revolting. I forbade anyone from discussing it. My buddy Pamela’s life was ruined as a result of it. Utterly.”

She didn’t mince words when it came to James. She wrote, “And shame on Lily James, whoever the fuck she is.”

5 Reasons Why To Watch “The Wheel of Time”