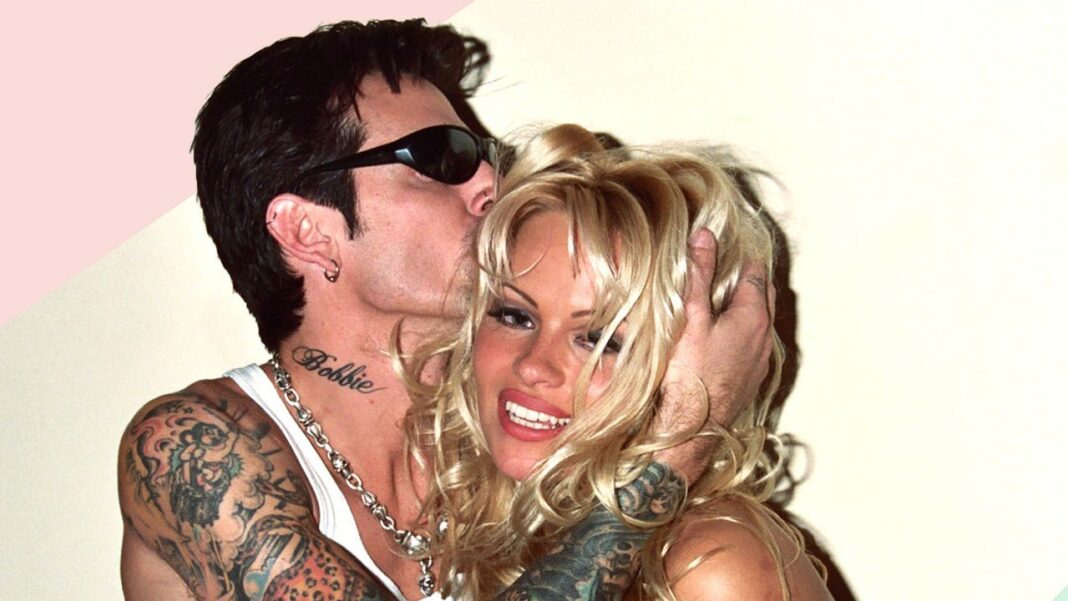 The circumstances leading up to the publication of Pamela Anderson and Tommy Lee’s infamous sex video in the 1990s are chronicled in Hulu’s new series “Pam & Tommy”, but what happened to Anderson following the tape’s release had a significant impact on her career. In the series, Lily James portrays the renowned blonde bombshell opposite Sebastian Stan as her violent rockstar husband, Mötley Crüe drummer Tommy Lee. Robert Siegel, who wrote the script for the Academy Award-winning film The Wrestler, developed Pam & Tommy. It portrays Anderson and Lee as victims of a crime that landed them in the heart of one of the most notorious celebrity scandals of the 1990s.

“Pam & Tommy” begins with a dissatisfied carpenter called Rand Gauthier, played by Seth Rogen, who was contracted to renovate Lee’s Malibu property but was fired and left underpaid. When Gauthier goes to the residence to fetch his tools, Lee threatens him with a gun and orders him to leave without them. Rogen’s Rand Gauthier, humiliated and anxious for payment, comes up with the idea of returning to the house and stealing a safe that Lee keeps in his garage, expecting that the contents will more than cover the cost of the repair. He discovers the famed tape inside the safe, which he subsequently decides to post on the internet, an extraordinary step at the time.

The morality of sharing such material without the consent of all parties involved has been a hot-button topic in recent years, with celebrity sex tapes and nudes becoming so widely accessible online, as well as the increase in retaliatory “revenge porn,” frequently against the subjects’ will. However, the internet was still relatively new at the time, and the video’s disturbing content helped it become one of the earliest viral videos. The sex tape was published just as Pamela Anderson’s career was taking off, and while it didn’t totally wreck her career, it did significantly derail it and make it impossible for her to be regarded seriously as an actress. While both Pamela Anderson and Tommy Lee were affected severely, Anderson was the one who suffered the most, both personally and professionally.

Anderson was attempting to move past her sex symbol status and establish herself as a legitimate movie star when the tape was leaked in 1996. When Pamela Anderson and Tommy Lee filed a lawsuit to prevent the tape from being public, opponents pointed to her Playboy spreads, questioning why the couple would care about the recording since she had posed for Playboy several times. Without respect for the problem of permission, private and intimate moments she had had with her spouse were equated to the attractive image she conveyed in her public job.

People were quick to assume that the tape had been leaked on purpose because of her public image and her husband’s bad-boy attitude. The general public assumed it was a PR gimmick, which cast Anderson in a negative light. Her acting career never fully recovered. Before playing C.J. Parker on Baywatch, she had only appeared on Home Improvement as a “Tool Time lady,” and when her next endeavor, Barb Wire, flopped around the same time as the tape emerged, she became a punchline. Her marriage to Tommy Lee was also strained as a result of the tape, and the couple split in 1998 following a domestic dispute that landed him in jail for six months.

Pamela Anderson felt raped after the events of “Pam & Tommy”, and she was met with a public that had little sympathy for a woman who was comfortable with her sexuality. The public’s perception of her was forever changed as a result of the stolen footage. She has a lengthy history in the public eye and is still one of the most well-known and recognizable sex idols of the 1990s.

Previous articleDuring “Pam & Tommy” TV Series, What Band is Tommy Lee In?
Next articleCortana Is Fixed In the “Halo” Show by Changing Her Color To Blue