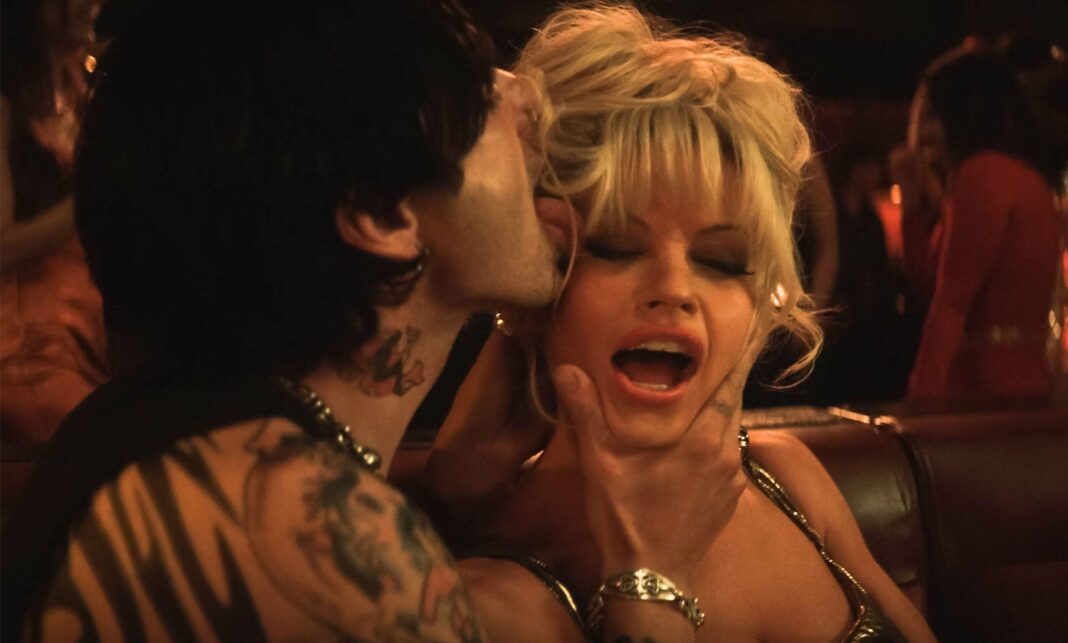 “We’re all in this together,” Tommy reminds Pam as she digests the news that the Penthouse legal team will depose her alone. Tommy has made previous iterations of this declaration, but they never seem to land the way he expects. Pamela is irritated by the hollowness of the sentiment. Even if Tommy wanted to, he couldn’t take half the weight of their stolen and recirculated sex tape. Her glittering fame is on the verge of withering, and the video will eventually destroy her metamorphosis — from Playboy centerfold to leading lady. So, what does a kind husband say instead? “I wish this was happening to me,” is a less annoying sort of commiseration, but after watching this episode, which depicts Tommy’s terrible encounter with his own declining popularity, I’m skeptical. Would Tommy truly give up the millions of records he always brags about in order to rescue Pam’s career? Because towards the end of the show, they are the stakes.

However, when “Uncle Jim and Aunt Susie in Duluth” begins, the sex tape is a minor affair. It’s for sale on Rand’s and a few other sites, but the circle of people who are interested in small. Because flyover country is unaware of the tape’s existence — a charming pre-internet benchmark — Jay Leno won’t even do the bad Pam gags his writers offer him. It’s almost delightful to see the “news” bar so high, first by a late-night host and then by the Los Angeles Times. Reporter Alicia Krentz pitches the story to her editor, who sees little value in a cheesy home movie for his affluent audience.

But what about actress Pamela Anderson Lee? She’s a big deal. Gail manages to place the Barb Wire star on the cover of Glamour, despite the fact that the road from boy mags to women’s monthlies is not well paved. She has an Entertainment Weekly event tonight. Pam is privately grieving her miscarriage, but unlike Tommy, work provides a glamorous distraction. Tommy, impoverished, miserable, and misled. He goes to the Viper Room to drown his sorrows, but they multiply instead. He feels left out by the music, which is by Sleater Kinney, and he resents going unnoticed. Tommy decks a guy in the bathroom who hails the sex tape as his best work since “Girls, Girls, Girls,” and it’s not because a complete stranger had the nerve to say he’d seen it. Tommy is enraged that he was singled out for his more recent albums.

The sex tape has yet to make the press, but Tommy’s squabble has. “Everything he does reflects on you,” Gail informs Pam, but the lesson isn’t for Pam. It’s a point of contention between her and Tommy. They certainly do. Under such pressure and uncertainty, any couple would fight. Pam holds Tommy responsible for not “managing” the sex-tape situation, which is an unreasonable request. She then accuses him of wanting it to happen on some level subconsciously. Tommy is well aware that this is his final moment in the spotlight. Mötley Crüe is out, and Third Eye Blind, who appears to be a bunch of jerks, is in.

Then things get a whole lot worse. Bob Guccione, the founder of Penthouse, gets his filthy hands on the video, and the first thing you need to know about Bob Guccione is that he despises Hugh Hefner. Tommy believes he’ll release stills from the video solely to irritate Hugh. In fact, Tommy is the one who comes up with the notion of suing Bob based on his own hunch. Pam, on the other hand, is hesitant to poke the bear. They don’t know what Bob’s plans are, but he’s a vocal supporter of his right to free speech and a general contrarian. In addition, a lawsuit brought by Pamela Anderson against Playboy’s main competitor will draw the same attention they’re trying to avoid.

I think it’s a moot point if Pam and Tommy’s sex tape ever stood a chance of fading out on its own. It’s hard to believe from my vantage point in 2022. Rand and Miltie, on the other hand, are already on the run. Remember what Butchie Peraino, the loanshark, told them at the start? A celebrity sex tape does not make anyone wealthy. I had no idea Rob Lowe had a sex tape until Butchie told me, and that’s exactly the kind of useless knowledge I enjoy.

Of course, we’ll never know because Tommy and his team of lawyers overrule Pam’s objections to the lawsuit, and Bob responds precisely as Pam predicted. He fights back with his own team of lawyers. Penthouse is posting naked images of Hugh’s best girl, he declares in a revelatory press statement. Alicia persuades her prudish, old-fashioned editor that a pornographic court case in the United States is indeed noteworthy. On the front page of the entertainment section of the Los Angeles Times, an article appears below the fold.

Tommy still hasn’t grasped the concept! He believes the narrative is manageable, but it is far from it. Hef notices it, as do the Baywatch producers. Nikki Sixx is a fan of the entertainment area. The Seattle Post-Intelligencer, for example, publishes second-day stories. Pam’s cover is pulled by Glamour. Worse, the lawsuit persuades Leno that shooting is acceptable. Pam’s surgically enlarged breasts are “flotation devices,” he says, and she doesn’t wear that much clothing on Baywatch either, so what’s the difference?

The only person who appears to be concerned about Pam is Gail, who advises her to learn to say no. In Hollywood, being a woman means standing up to a room full of guys and saying no. Pam is paying attention. She shakes off a PA who tries to manhandle her into place on set. It’s not much, and it’s far too late, but it’s better than nothing. Tommy scooped Pam into his arms at the close of last week’s episode, promising to care for and protect her. Pamela goes out of view on her own two feet this week, with even more dreadful news weighing on her mind.

Previous article“The Last of Us”, an HBO Series, Will Not Premiere Until 2023
Next articleRelease Times, Preload, and File Size Explained for “Elden Ring”