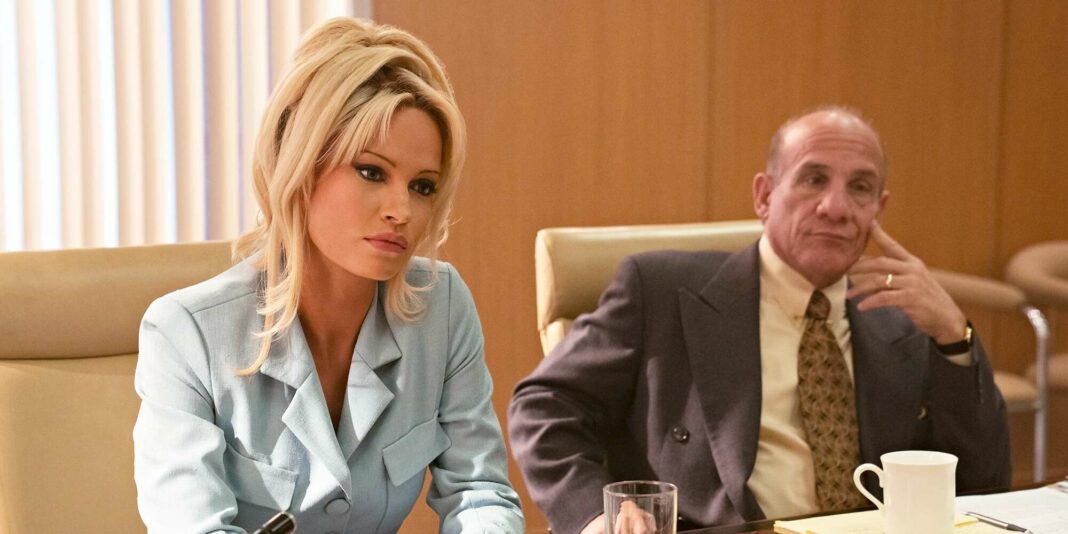 Pamela Anderson appears in “Pam & Tommy” episode 6 to undergo a lengthy deposition on her illegally disseminated sex tape, but it’s unclear whether her husband Tommy Lee underwent a similar deposition in the series or in real life. It’s difficult to say whether Tommy Lee was deposed in the Pam & Tommy true story based on existing records. The series, on the other hand, isolates Pamela Anderson in order to emphasize the media’s double standard against her and the lack of understanding of consent throughout the public discussion of the sex tape.

The lawsuit Lee and Anderson filed against Penthouse magazine, which planned to publish details and photographs from their sex tape, is significantly featured in episodes 5 and 6 of Hulu’s “Pam & Tommy”. Pam gets an order to testify in a deposition at the end of episode 5, but Tommy doesn’t, implying that his might be mailed separately. The deposition in Pam & Tommy episode 6 takes up most of the episode and includes a variety of personal and nasty questions. Pam may have purposely released the tape, according to the opposing lawyer, who also doubts the act of filming sex in the first place.

“Pam & Tommy” heavily imply that Tommy Lee was not deposed by showing only Pam receiving the order and being alone at the deposition. However, in real-life situations, this may not be the case. Because the lawsuit was never tried, the testimony, including deposition information, was never made public. Because neither Lee nor Anderson was engaged in the production of “Pam & Tommy”, it’s possible that the show’s portrayal of this topic is equivocal. The Hulu series also condenses a series of Anderson depositions into a single day, after which she refuses to continue, implying that this is why the lawsuit is abandoned, but it was thrown out by judges a year later in the Pam & Tommy true story.

Whether or not Tommy Lee testified, the trial process appears to have had a significantly greater influence on Anderson than on Lee. Anderson wrote passages of Lee’s memoir Tommyland in which she describes the problems she faced:

“It was great sitting through depositions, where old men with crusty white sh*t in the corners of their mouths would hold up pictures of me naked in Playboy and ask why I’d even care that the tape was out there. I couldn’t handle it.”

Lee’s own narration, on the other hand, indicates dissatisfaction with the tape’s circulation and the lack of legal redress but does not mention being deposed or go into great detail regarding the legal process. Anderson’s nudity was perceived as more lurid, and more taboo, than Lee’s, as did the overall news coverage.

Pam’s deposition against Bob Guccione and Penthouse, as a result, is one of “Pam & Tommy’s” more dramatized moments. The deposition, on the other hand, serves as a stand-in for Anderson’s broader probing by the media and legal system in the series. Anderson had to deal with a patriarchal system fascinated with her body and unaware of the distinction between consenting to pose naked and having a private sex tape published. While Tommy Lee may have been deposed in real life or been present during Pamela Anderson’s depositions, having her singled out and isolated fits the “Pam & Tommy” theme better. It’s just as possible that Tommy Lee not being deposed in “Pam & Tommy” was a dramatic choice rather than one based on fact.

For MC Lyte, Being A Trailblazer Is All About Continuing To Build