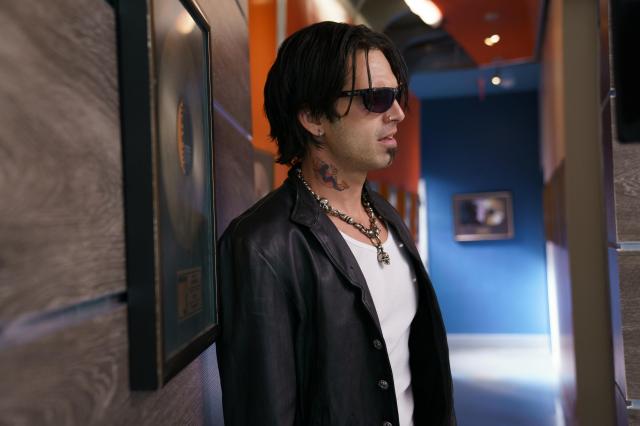 The fifth episode of “Pam & Tommy” concludes with a musical poke at Tommy Lee. Sebastian Stan (The Falcon and the Winter Soldier) plays singer Tommy Lee, while Lily James (Cinderella) plays actress Pamela Anderson in the Hulu series. Mötley Crüe, Lee’s band, was one of the most successful rock bands in the world in the 1980s, selling over 100 million records. Lee also grapples with his band’s diminishing importance in the music industry throughout the Hulu series, which tells the narrative of Tommy and Pam’s leaked sex tape and its repercussions.

In episode 5, Lee and Anderson sue Penthouse founder Bob Guccione in an attempt to get ahead of the tape’s general dissemination. The pair quickly discovers that the video is far more important than they had previously assumed. Pamela Anderson is experiencing new heights of stardom as the release of her film Barb Wire approaches, whilst Mötley Crüe hasn’t released a hit in years. Guccione obtains the tape, which has been circulating online and through local bootleggers, causing Lee to fear that Penthouse may publish stills. The tape’s growing popularity puts a strain on their marriage, but Lee also has to deal with the fact that the tape is becoming more well-known than his music.

When he and his band members arrive at their customary studio, they discover it has been taken over by a newer band, Third Eye Blind. Mötley Crüe approaches the band and learns that they are both signed to Elektra, which means that the studio has decided to prefer the new and popular Third Eye Blind above Mötley Crüe, which story was dramatized in The Dirt. As the credits roll, the hit song “Semi-Charmed Life” by Third Eye Blind plays. Mötley Crüe’s heavy metal sound does not fit in with the grunge and pop rock styles that dominated the 1990s music landscape, therefore the song choice comes at a time when Tommy Lee’s relevance as a rock star is waning. Unfortunately, Lee’s preoccupation with his dwindling celebrity makes it difficult for him to realize how much worse the tape’s publication will be for his wife Pamela Anderson.

The use of “Semi-Charmed Life” is primarily merely a comic stinger to an episode in which Lee deals with his fading celebrity. While the studio incident with Third Eye Blind did not occur, Third Eye Blind epitomizes the wave of new rock bands that became prominent in the 1990s, according to guitarist Kevin Cadogan. Lee feels left out of the grunge movement, and while in the toilet at the Viper Room, he gets into a confrontation with a fan who mistakenly suggests that he hasn’t written a good song since the late 1980s.

Pamela Anderson’s career is on the rise, and she has the potential to become an A-list movie actress, as Mötley Crüe struggles to generate a hit in the mid-90s. Lee tries to be supportive and stop the recording from being released, but his arrogance just serves to make the tape more relevant. Anderson is slut-shamed and becomes the main focus of the scandal, despite the fact that he would rather be known for the tape than his music. Her career is in jeopardy as a result of the sex tape, while he is suffering primarily as a result of his band’s popularity in the previous decade.

Third Eye Blind did not have a studio problem with Mötley Crüe, despite a hilarious situation in “Pam & Tommy” episode 5. Tommy Lee’s decreasing relevance in the 1990s was mocked through the usage of their hit song “Semi-Charmed Life.” The Hulu series verifies Lee’s fear that he is antiquated in the 90s music scene by employing a pop-rock band and song.

Previous articleHBO Exec Provides “House of the Dragon” Trailer Update
Next article“The Last of Us”, an HBO Series, Will Not Premiere Until 2023