Tommy Lee, happy birthday! On October 3rd, the Mötley Crüe drummer turned 59, and many people have taken to social media to wish him well. Sebastian Stan, best known for his role as Bucky Barnes/The Winter Soldier in the Marvel Cinematic Universe, is set to play Lee in a future tv show. Stan just finished filming “Pam & Tommy”, a Hulu limited series on Lee’s whirlwind affair with Pamela Anderson, who is played by Lily James. Stan posted a fresh behind-the-scenes photo in character as Lee in honor of his birthday.

Stan wrote, “Happy Birthday @TommyLee!!!!” Lee obviously approves of Stan’s interpretation because he posted it on his Instagram stories. 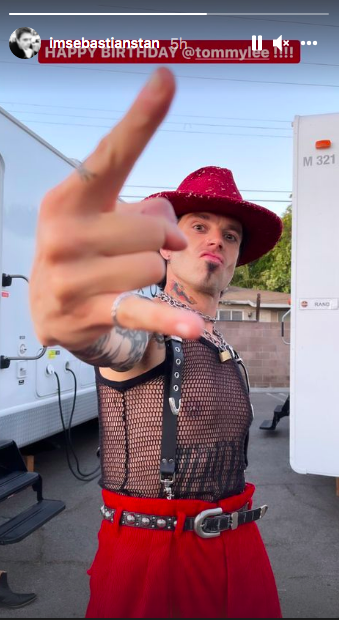 Craig Gillespie, the director of “Pam & Tommy”, spoke with ComicBook.com earlier this year about the impending series.

“I know, it’s kind of crazy how that just got attention there absolutely, we’re four weeks in and Sebastian and Lilly are just killing it. And you know, we’ve got Seth [Rogen] in there as well and Nick Offerman and it’s a really, really crazy wild fun ride that ultimately, what I love about it is it’s it has a lot of heart. Again, it has a very similar sensibility to I, Tonya where you get to go on this journey and understand, you know, the damage that was done to Pamela Anderson and that as an audience we’re again complicit in this, because it’s like, you know we devour all of this, without any repercussions for what’s happening to the individuals. So it’s sort of does this bait and switch in a way that was really exciting as well, but it’s pretty out there,” he shared.

We spoke with Gillespie again last month, and he explained why he like these types of stories.

“I don’t know. It’s maybe… it is odd in a way because literally, as much as I wasn’t aware of it, it seems like everybody, everything I work on is about outsiders,” Gillespie replied when we asked what draws him to real-life controversial figures (he also helmed I, Tonya). “I came to America when I was 19, and it’s felt very much like you’re like landing in New York in 19 on my own, not knowing anybody. I think maybe that’s impacted things in a way. Yeah. I’m just drawn to… I feel misunderstood and people on the outside, and just trying to find that humanity and that empathy and that understanding because I feel like very often we just judge and make quick assumptions on people in a very two dimensional way. I think when you hit stop and put yourself in their shoes and understand the journey, it becomes a really interesting thing. It makes you look at yourself.”