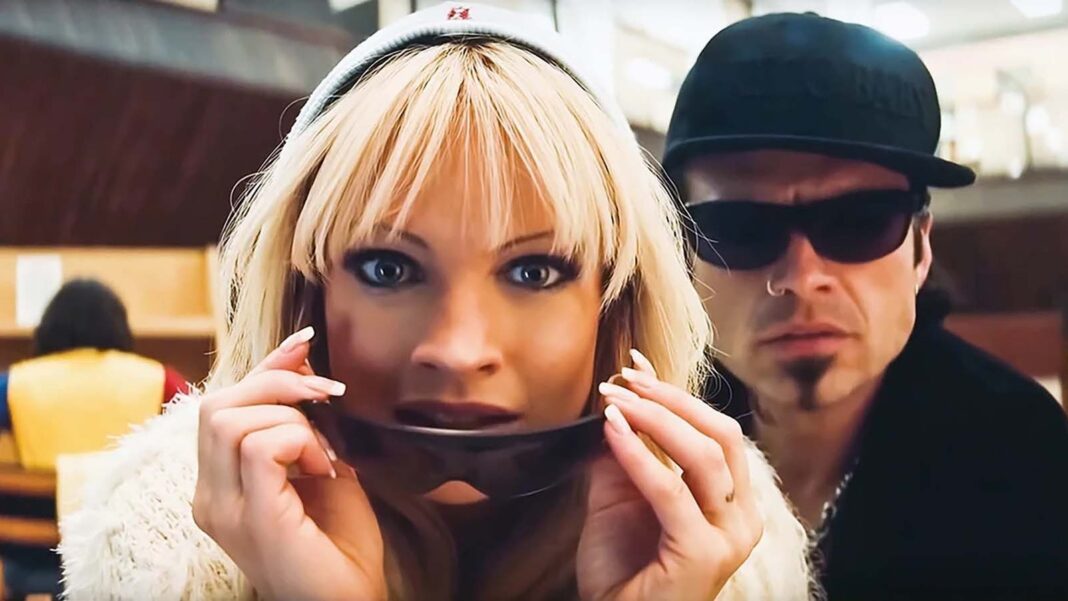 “Pam & Tommy” violates Pamela Anderson’s privacy and consent in the same manner as the famed leaked footage did, tainting the Hulu program with hypocrisy.

Pamela Anderson and Tommy Lee were helpless to halt the tape’s transmission, which quickly became a viral sensation. Anderson’s career was significantly harmed as she was continuously criticized, hounded, and embarrassed by the media, whilst her husband rose to a new level of rock goddom owing to the much-lauded size of his penis. Pam and Tommy see the double standards and sexism evident in the tape’s media portrayal, which becomes an undeniable focus point of the series in its second half. However, the show’s generally sympathetic presentation of Pam (played by Lily James) does not justify the fact that “Pam & Tommy” was created without Anderson’s permission and against her desires.

Anderson has stated many times about how tough this moment in her life was, especially because people suspected her of being complicit in the tape’s dissemination. She claims she hasn’t viewed the tape because of the stress and upheaval it caused her and her marriage, most of which she had to face while pregnant with each of her and Lee’s two kids, Brandon and Dylan. The marriage was also experiencing other problems, which were exacerbated by the recording, which led to Pamela Anderson and Tommy Lee’s divorce in 1998, after Lee was sentenced to six months in jail for spousal abuse. Anderson has indicated a wish to leave behind an abusive relationship, a humiliating incident, and the collapse of her marriage with two young children to care for. “Pam & Tommy”, however, has renewed public interest in the tape that caused Anderson so much grief, forcing her to relive her worst memories and wresting control of her own narrative and body away from her once more. Though “Pam & Tommy” emphasizes the significance of consent and female empowerment, the show’s existence demonstrates that it does not respect such ideals at all.

“Pam & Tommy”, like the infamous tape in issue, uses Pamela Anderson’s body, privacy, and autonomy over her own image for commercial and “artistic” objectives without her permission. More than that, “Pam & Tommy” capitalizes on Anderson’s trauma by revisiting and actually recreating some of her most distressing situations. According to sources close to Anderson, the “”The “Pam & Tommy” Hulu series has been so terrible for Pamela Anderson and everybody who loves her,” she says, adding that the footage makes her feel “so violated to this day.” It reminds her of a really difficult moment in her life ” (via ET Online).

Interestingly, there is a similar statement uttered in the series when Pam communicates to a puzzled Tommy how “violated” she feels. The creators of “Pam & Tommy” make it clear throughout the series that they understand the devastating impact of the invasion of privacy and toxic nature of celebrity culture, even as they are themselves nonconsensually invading privacy and blatantly subscribing to (and often encouraging) the cult of celebrity – just like the original tape. Unlike Pam and Tommy’s Rand Gauthier, though, the persons exploiting Anderson this time are not oblivious to the implications of their actions. They understood what they were doing when they created “Pam & Tommy”, and it appears that after weighing ethics against artistic freedom and profit, they decided that their program was worth the anguish it would inflict Pamela Anderson.

“Pam & Tommy” would never have been able to assist Pamela Anderson.

“Pam & Tommy” has exposed entire new generations to Anderson’s biggest regret by revisiting this dreadful chapter in her and Tommy Lee’s lives, calling upon her the same type of public scrutiny and humiliation that she had to undergo years ago. Countless individuals who would never have known anything about Pamela Anderson and Tommy Lee are now aware of them as a result of “Pam & Tommy”, which has revived a decades-old controversy that Anderson wishes to forget. Though the program is attempting to spin the events through a more current and compassionate lens, they are still selling a story about Anderson in which she has had no participation, making assumptions and projecting ideas onto her in the same manner that others did in the 1990s.

Furthermore, Anderson worked hard for many years to prevent the tape’s dissemination, a procedure that “Pam & Tommy” substantially simplifies and condenses. Despite the fact that it was a losing struggle, Anderson made it apparent that she was very disturbed by the idea that others were watching, selling, and talking about the tape. In recent years, her objective of putting the entire event behind her appeared to be within reach, as Pamela Anderson and Tommy Lee’s tape slipped from the forefront of national consciousness. But now, with Pam & Tommy’s popularity, it’s reasonable to ask how many more people have sought out and viewed the video who would not have otherwise. Even if the intentions were not malevolent, the show’s focus on a moment Anderson worked so hard to erase assures that “Pam & Tommy” will always cause more harm than good.

Numerous interviews with “Pam & Tommy‘s” authors, directors, producers, performers, and actresses all appear to underline one apparent central goal of the show: justice for Pamela Anderson. “Pam & Tommy‘s” publicity and marketing efforts have centered on resolving the infamous tape’s tale on Anderson’s behalf; however, this is simply not possible without her agreement. Though Lily James and the TV show’s producers supposedly reached out to Anderson several times, she remained defiant, while pals such as Courtney Love and others have made it very obvious that Anderson does not want this chapter of her life to be replayed.

“Pam & Tommy‘s” marketing has undoubtedly been protective and self-congratulatory in response to this, rewriting the past with a more current, female-driven viewpoint. Though director Craig Gillespie’s name is most prominently associated with the project, the majority of the series was directed by women, as “Pam & Tommy‘s” Twitter and Instagram feeds were quick to point out. However, only one episode out of eight was written by a woman, and male producers on the program outnumbered female producers by a roughly three-to-one ratio. The promotion also implied that the program would be mostly about Pam, yet she is noticeably and frustratingly absent from the Rand-focused pilot, in which she hardly appears. Pilots are typically seen as a show’s mission statement, in which case, “Pam & Tommy‘s” is very emphatically not emphasizing Pam, despite what the title and press interviews suggest.

“Pam & Tommy‘s” Finale was a shambles

“Pam & Tommy”‘s relationship is continually glamorized throughout the series, despite the fact that it was a highly passionate and stormy one. There was certainly glamour in Pamela Anderson and Tommy Lee’s deep and extravagant Hollywood love story, but it is dishonest and harmful to romanticize the positive aspects of the couples’ relationship while largely ignoring its very real and devastating fallout, which resulted in Anderson and Lee’s divorce. Though the chyron that typically accompanies any theatrical version of a true event briefly notes Lee’s uncontested allegations of spousal violence at the end of “Pam & Tommy”, the violent aspects of Anderson and Lee’s relationship are mostly unaddressed and ignored by the series. Sebastian Stan, who plays Tommy Lee, clarified that he was glad the show didn’t delve into the couple’s tumultuous divorce because the show isn’t about them – “It’s about what [the tape and its aftermath] say about America, the internet, and the media, and how we are very much driven in many ways for profit and consumerism – we don’t stop at the repercussions of how it might impact anyone on a human level, because they’re celebrities, and maybe you can get away with it. No, it does not.” (Image courtesy of EW). Ironically, MCU star Sebastian Stan’s sentiments could be applied just as readily to Pam and Tommy as they could to the uproar over the iconic footage – and it has become all too evident that individuals can still get away with it.

Instead of confronting the true issues of abuse and the show’s own culpability in Pamela Anderson’s prolonged exploitation, “Pam & Tommy” chooses to provide closure that never truly existed. Rand Gauthier, played by Seth Rogen, is depicted to be contrite for the pain he caused Pam by leaking the recording, although the real Gauthier was only apologetic in the sense that he regrets that his actions destroyed his own life. According to the story on which “Pam & Tommy” is based, Gauthier “likes the notion that he offered this modest gesture to the world, and he’s always loved seeing the tape himself” (via Rolling Stone). Despite the show’s partial redemption of Rand Gauthier, this “Pam & Tommy” fact check demonstrates that no lessons were learnt. Similarly, Anderson and Lee’s legal and marital difficulties were not “finished” when they handed away their rights to the recording, as Pam and Tommy’s abrupt finale appears to imply. Even after their divorce, she and Lee maintained an unified front in the fight for their personal privacy, filing a case against the Internet Entertainment Group for copyright infringement, which they finally won in 2002.

“Pam & Tommy” is entertaining television, but it doesn’t make it acceptable.

One of the most annoying aspects of Pam & Tommy is that it is truly fantastic. It’s difficult to dismiss it as lurid garbage since it’s enormously entertaining, conceptually consistent, well-acted, and well-written as a television show. It’s much more than that, which exacerbates its impact on the actual Pamela Anderson; Pam & Tommy is widely seen and well-reviewed despite Anderson’s express refusal to participate. It might even be nominated for Emmys, keeping Anderson’s horror in the spotlight for months to come. If Pam and Tommy were objectively horrible, these things would not be taken into account, and the program would be considerably easier to dismiss and ignore – but it isn’t that easy.

“Pam & Tommy” is a high-quality and extremely immoral film made by a slew of brilliant directors and performers. Though it professes to represent Anderson and question the current media’s double standards, Pam & Tommy really support them by delivering the idea that entertainment is more valuable than a genuine woman’s voice in her own life and healing. Anderson, on the other hand, is now ensuring that she gets to speak for herself with an impending Pamela Anderson Netflix documentary, which has been announced in the wake of “Pam & Tommy”‘s heightened media attention. Hopefully, this means Anderson will be able to give her side of the story once and for all, free of media misinformation, arrogant interviewers, narratively-driven authors, or theatrical embellishment.

Previous articleWhat Is the Difference Between The Silver Team On The “Halo” Show And The Blue Team In The Games?
Next article“The Gilded Age” Season 1 Finale Recap

“Starfield” Won’t Have Controversial Fallout 4 Feature According To Bethesda