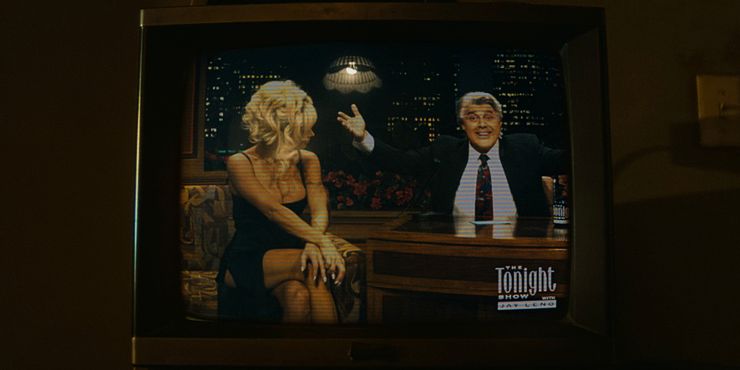 The first episode of Hulu’s “Pam & Tommy” begins with a recap of an awkward 1996 The Tonight Show with Jay Leno interview for Lily James’ Pamela Anderson, and some may wonder if the interview ever took place, as well as who plays Jay Leno. Anderson’s new film Barb Wire should have been the subject of the conversation, but it instead cringeworthy focuses on her and husband Tommy Lee’s stolen sex tape, with Anderson obviously embarrassed. The sequence foreshadows Pam and Tommy’s point of view, which will be more focused on the emotional toll on the victims, particularly Pamela Anderson, and the brutal way it was reported in the media.

“Pam and Tommy” are based on the 2014 Rolling Stone article “Pam and Tommy: The Untold Story of the World’s Most Famous Sex Tape.” The Hulu drama claims to portray the whirlwind love affair between Pamela Anderson and Mötley Crüe drummer Tommy Lee (Sebastian Stan), which began with a first meeting and quickly turned into marriage in just 96 hours. Pam & Tommy’s first three episodes were released on February 2nd and were available to stream on Hulu in the United States and Disney+ or Star+ worldwide.

The first episode of “Pam & Tommy” begins with a friendly dialogue between James’ Pamela Anderson and The Tonight Show presenter. When he asks her about the recording, it quickly becomes unsavory and uncomfortable, especially with the camera lingering on Anderson’s evident anxiety. Jay Leno is well depicted by comedian Adam Ray in the brief opening sequence, relentlessly making jokes that were allowed (yet were no less nasty) in the 1990s but sound absolutely out-of-bounds in 2022. Ray, who has been in a number of TV shows and notably voiced Swift Wind in She-Ra & the Princesses of Power, not only looks like Leno thanks to prosthetics, but he also copies his approach to debating the sex tape issue in 1996 frighteningly well.

“Pam & Tommy’s” exact interview never happened in real life; instead, it was a composite of several interviews. Pamela Anderson’s outfit, hair, and make-up in “Pam & Tommy” episode 1 alludes to a specific interview Pamela Anderson conducted with Jay Leno in 1996 (via YouTube) when she was pregnant with Tommy Lee. The tone of the opening sequence, on the other hand, is more authentically mirrored in Anderson’s real-life debut on The Tonight Show. Anderson vented her frustrations at Leno, who attempted to justify himself by claiming that he may have made one joke about the issue, but failed horribly when Anderson produced a tape with proof of at least 12 jokes Leno had made about them in his monologues (via YouTube). The tone of the interview echoed “Pam & Tommy’s” first episode’s opening scene, particularly when Anderson reacted to the jokes, saying heartbreakingly, “This is upsetting to us.”

“Pam and Tommy’s” first scene effectively set the tone and aim for the rest of the series, telling the audience what to expect after the tape is made public. Adam Ray is expected to return in episodes 5 and 7, so we should expect more from the Jay Leno interview that was briefly seen at the start. When that happens, “Pam and Tommy” will hopefully be able to state even more explicitly what they hinted at the start, namely, how unfair and biased the media response was at the time, particularly in regards to Anderson.