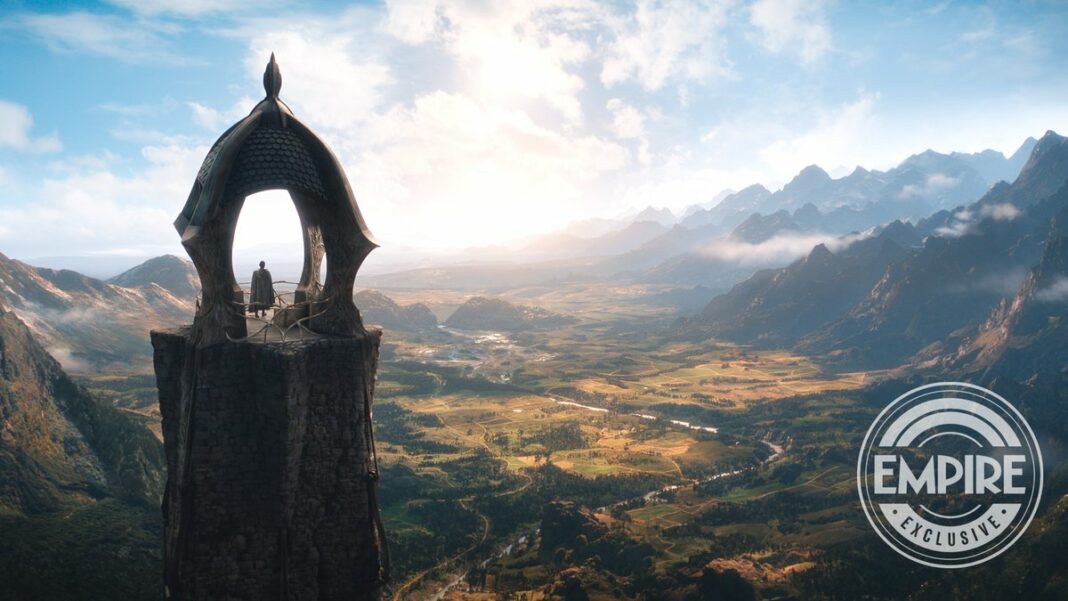 “The Lord of the Rings: The Rings of Power”, directed by Patrick McKay and John D. Payne, began filming in New Zealand in 2020, with a debut trailer published in February of this year finally offering fans a glimpse of what’s to come. The trailer not only teased new people, locales, creatures, and conflicts, but it also revealed a younger Galadriel, played by Morfydd Clark. More images from the series have been revealed in the months since the trailer, including closer glimpses at Dwarves and Elves, as well as a new race of Hobbits, the Harfoots, who have never been shown on screen before.

Fans may get a clearer look at the depiction of Middle-earth that will be featured in the program in a new image from Empire Magazine. With rich green forests, undulating hills, and foggy mountains, the image teases a Middle-earth that is akin to the version depicted in Jackson’s trilogy. An unknown individual is also seen atop what appears to be an Elven structure in the shot.

Although it’s unknown whether part of Middle-earth the photograph shows, the structure’s design appears to be Elven in origin. It’s probable that the tower is part of Lindon, the Elven capital city, which is noted for its docks and ships sailing west. What is apparent, though, is that New Zealand, as it did in Peter Jackson’s original trilogy, will provide a stunning background for the action in “The Lord of the Rings: The Rings of Power”.

Many questions remain about the impending “Lord of the Rings” film series, but it’s clear that viewers will be treated to some spectacular scenery. It’s unclear what function the tower in the photograph plays in the show’s narrative, but it does confirm that, despite filming in New Zealand, the show will take viewers to hitherto unexplored locations of Middle-earth. “The Lord of the Rings: The Rings of Power” appears to be taking its own route, despite sharing some of the same characters and elements as Jackson’s trilogy, and the new artwork reveals a portrayal of Middle-earth that is both familiar and fresh at the same time.

“The LOTR: Rings of Power” TV Show Has a Five-Season Plan

Previous article“The Sandman” Show Is Set To Premiere On Netflix This Summer
Next articleNew Hobbit Character Details are Revealed in the “LOTR: Rings of Power” Show