The Biggest TV Battle of 2022 Is Game Of Thrones vs. “Lord Of The Rings” 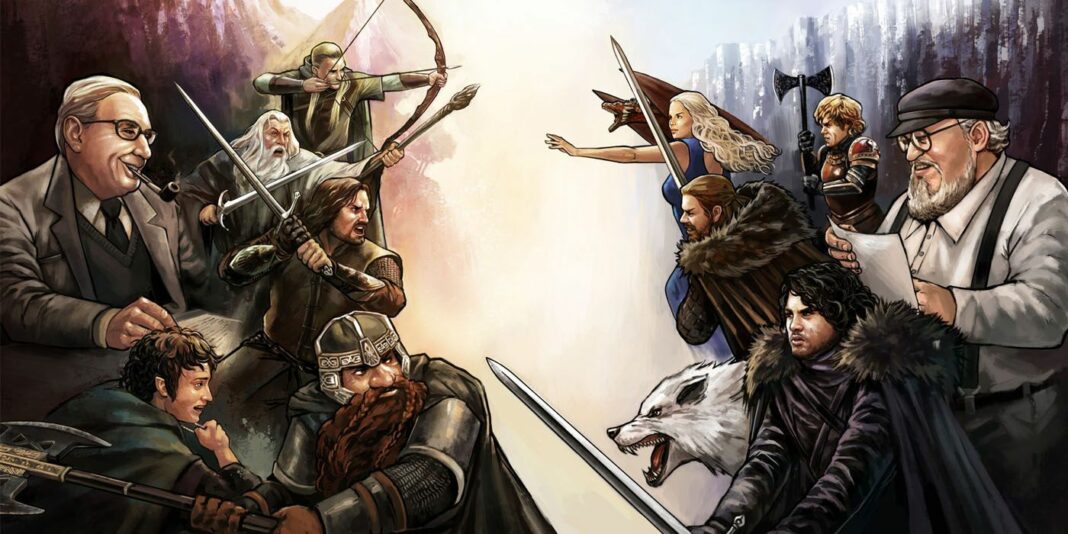 Game of Thrones vs. “Lord of the Rings: The Rings of Power” is now the major TV clash of 2022, thanks to the publication dates of “House of the Dragon” and “Lord of the Rings: The Rings of Power”. Game of Thrones and The Lord of the Rings has long had a tenuous relationship. George R.R. Martin, the author of A Song of Ice and Fire, was heavily influenced by J.R.R. Tolkien, with similarities in their works going far beyond the RR middle initials. Because so much fantasy imitates Tolkien’s works, Martin developed ASOIAF, with the writer inspired by him but also seeking to disrupt many of the genre’s clichés. That carried over into their adaptations, with Game of Thrones clearly paying a tribute to Peter Jackson’s Lord of the Rings films.

Despite the fact that they were connected, their travels rarely intersected directly. Martin’s first book, A Game of Thrones, came out 40 years after The Lord of the Rings, and Game of Thrones premiered on HBO a decade after Lord of the Rings: The Fellowship of the Ring hit theaters. They are now going head-to-head now that both have established movie/TV franchises in an era when every studio and network is looking for the one IP to rule them all.

Why are the “Lord of the Rings and the Rings of Power” comparable to Game of Thrones?
Because of the timeline, “House of the Dragon” and The Rings of Power should face off at the Emmys in 2023, assuming both are nominated, as their respective streaming services are sure to be, cementing their status as TV’s major new rivals. There’s a feeling in which everything fits together and completes the circle: Both Martin’s books and the Game of Thrones television show owe a debt to Lord of the Rings, but that obligation is now being paid back in kind. All networks and streamers are seeking the next Game of Thrones, therefore “House of the Dragon” and The Rings of Power were born out of a desire to create big-budget, epic high fantasy shows that can dominate in the same way.

Of course, television viewing habits have evolved dramatically in the few years since Game of Thrones finished in 2019, so a show with the same amount of live viewership is improbable. Regardless, while streamers search for the next watercooler hit, two of the most prominent competitors are premiering at the same time, and both face significant challenges. “House of the Dragon” must reclaim audiences after the Game of Thrones finale was at best contentious, and The Rings of Power has sparked debate over possible alterations to Lord of the Rings history. Game of Thrones has an established track record on TV, but Lord of the Rings is one of the most popular cinematic trilogies of all time, making it an enthralling confrontation worthy of a Westeros or Middle-earth fight – but, hopefully, the actual winners will be viewers.