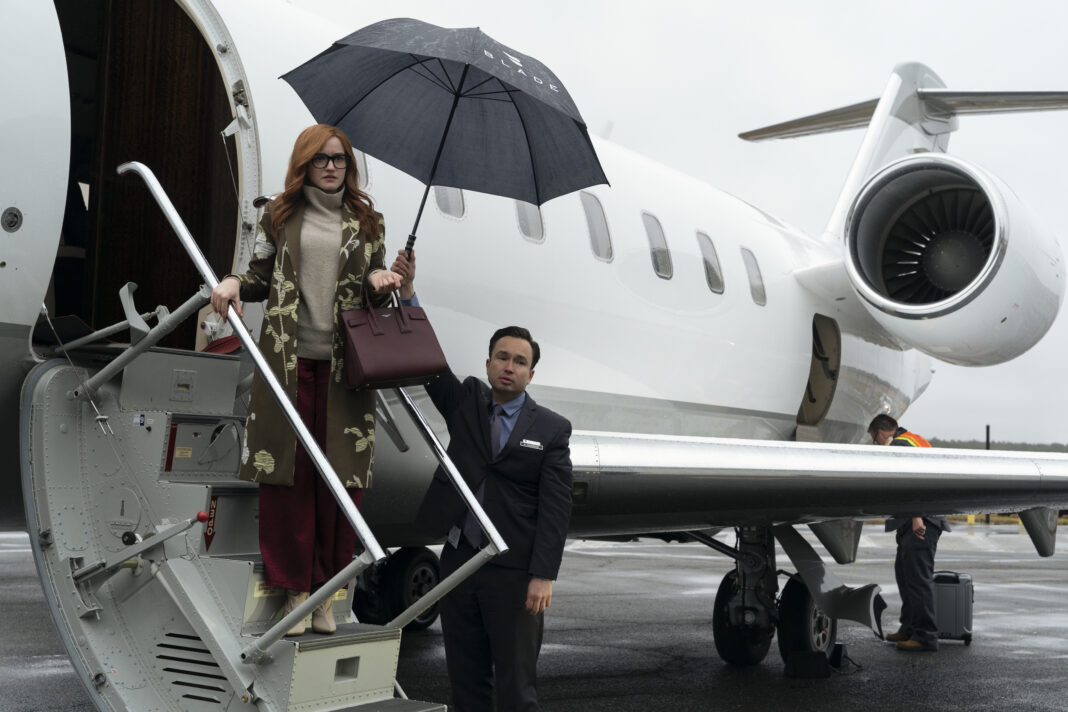 “A Wolf in Chic Clothing” jumps back and forth between the show’s current storyline and Anna’s past. It does so with quick cuts to cover all of the ground concerning Anna’s finances and how she went about attempting to secure financing for the $40 million leases and renovation of 281 Park Avenue, the building she was determined to house ADF in after learning about it from one of Nora’s friends in the previous episode. It’s amusing to pick up on the bread crumbs from prior episodes that Anna notices and later deploys as the series progresses. Of course, there’s 281 Park, and all the comparisons of ADF to Soho House in this episode made me understand that Anna had the concept for ADF on the Ibiza yacht in episode two when the group was discussing Soho House’s diminishing exclusivity. If there’s one thing Anna excels at, it’s reading people and circumstances and exploiting what she notices.

For example, in the Before Times, while attempting to persuade top-brass Bank of America lawyer Alan Reed to support her and ADF — as something of a sponsor to the Wall Street world she’s finding impenetrable, according to the one financier Vivian does get to speak with her — she routinely plays on Alan’s fatherly impulses and insecurities by mentioning her own father’s dismissiveness of her, how difficult it is to be a Because of Alan’s protective reaction to her touching his family portrait during one of her office visits, it appears she knows this will work.

And she is correct. This empathetic ruse, combined with an (apparently) rewritten business proposal and her makeover moment, in which she colors her hair red and dons her thick-framed black glasses, convinces Alan to join ADF, and he begins assisting her in securing her finance. He signs a critical paper vouching for her assets, presumably reassured by his phone talk with Peter Hennecke, the Delvey family’s business manager in Germany, that Anna’s trust fund is sound and unbroken. But it’s not just pity, or Anna’s new look, or the revamped pitch deck that has Alan hooked. Vivian wonders if Alan and Anna were fucking without the benefit of Alan actually agreeing to speak with her for the article, but she knows that can’t be it.

Alan was pulled in by (a) the money Anna’s initiatives had the potential to bring in, even if his promised retainer never arrived, and (b) the exhilaration of it all, as Vivian’s financier source and Todd the lawyer point out to her. In flashback sequences, we see how Alan’s professional relationship with Anna revitalizes his very regimented life in almost every way. On Anna’s advice, he gets new glasses, eats at trendy secret eateries downtown, updates his workplace artwork, summons the bravery to cut his aimless daughter off, and performs oral sex on his very satisfied wife at 6 a.m.

While this may appear to be an unexpected side effect of Alan and Anna’s partnership, the excitement is genuine and addictive – we see more of it with each episode. Vivian and her Scriberia coworkers are aware of it as well. They’re enthralled when Vivian updates them on the story’s development and bursts into the toilet while peeing to announce that Anna hijacked a private plane to go to a Berkshire Hathaway conference in Omaha and that Blade is filing charges and working with the ADA. It’s engrossing to watch. And, while this is a thrilling revelation, it pales in comparison to Vivian’s revelation to Alan that Peter, who was promising to send over the confirmation of Anna’s assets and other critical papers, was none other than Anna herself, using a virtual SIM card and a $5 voice-distorter software. As they continue to unearth more stories like this, Vivian and her coworkers are impressed by Anna’s bravado, and that is the essence of the Anna Delvey story’s appeal. That appears to be the reason why people were drawn to her in the first place, why the original New York piece went viral, why the article was adapted for television, and why the program continues to grow in popularity. Some of her actions are almost too bizarre to accept.

Finally, the story of Alan and his connection to Anna are used to make two larger themes. First, the episode effectively sets out how Anna’s world is all about relationships and introductions without having to explain all of the financial details. Anna only needs to persuade a few key people that she’s worth investing in, and her relationship with them legitimizes her in the eyes of others, and the rest is history. Faking it and making it are, once again, inextricably linked. Anna “knows all the right people,” as the Blade guy informs Vivian. She was in the right position at the right time.

Second, Anna may be a master manipulator, but that doesn’t change the fact that the arguments she makes to Vivian during their Rikers discussions are true: Men like Alan get to fail up. While she is incarcerated, men who have done comparable or worse acts than she are accused of getting away with nothing. (I’m not sure if Anna’s frequent accusations about her father just desiring sons and always dismissing her are accurate.) When Vivian and Jack are practicing pregnancy massages at home (being pregnant and racing to report out this story is taking a toll on Vivian’s body), they catch President Trump giving a State of the Union address on the news, and Vivian informs Jack that Alan was promoted despite allowing his company to be defrauded by Anna. (Alan’s demotion to Court 12 at his racquetball club, rather than the usual Court 1, which is typically reserved for VIPs, isn’t a serious consequence, though he’s plainly annoyed.) Is the Trump analogy, from a storytelling standpoint, a little too obvious? Maybe, but it makes sense in context: Trump is the ultimate con artist, and his ascension to the nation’s highest office can’t be separated from the cultural period depicted in the show.

Even though Vivian and her colleagues have a lot of fun investigating Anna’s pranks, and we have a lot of fun watching them play out at home, it’s those two real-world facts that this episode leaves us to ponder.