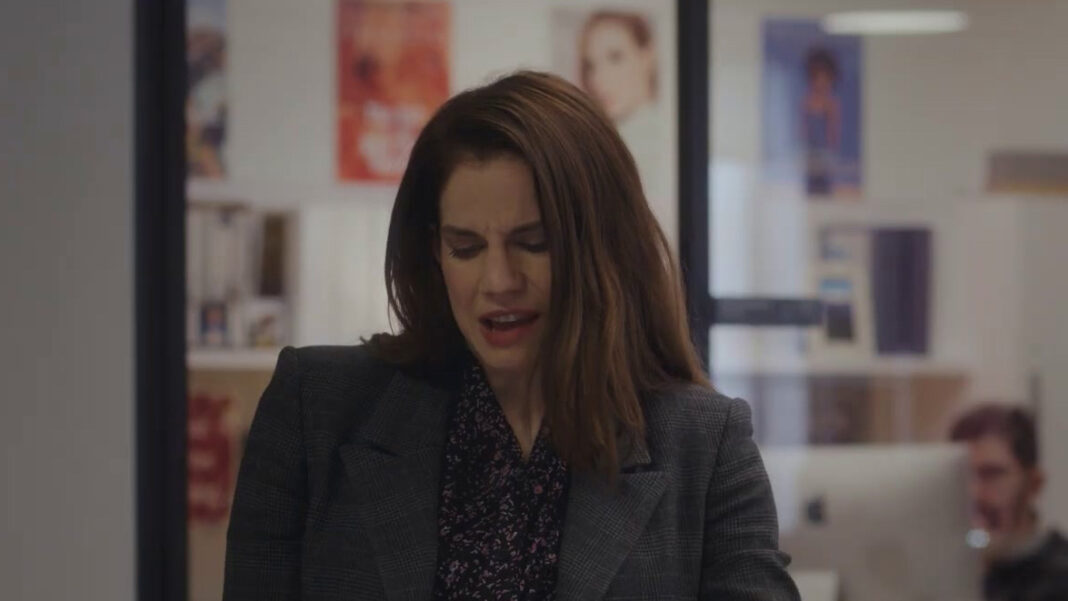 The third episode of “Inventing Anna” moves along at a steady pace: Vivian begins to make progress on her tale; Anna begins to make progress on her, eh, crime-committing; and we’re treated to some eye-popping sticker shock at Bergdorf Goodman. Overall, I think this episode narrows its scope in a way that works well from a dramatic, “we’ve finished the setup and are ready to start the plot rolling” perspective.

At Riker’s, Vivian has an unpleasant confrontation with Anna. All Anna wants is for Vivian to keep her promised visit times (and she claims that pregnancy isn’t an excuse because some people have babies in fields); (2) to deny the depth of her relationship with Chase; and (3) for Vivian to bring her some posh underwear from Bergdorf because the prison panties stink. Following that, Vivian turns to Nora Radford for an interview, courtesy of the customary inspo from her Scriberia staff.

Nora, who agrees to speak with Vivian only on the phone and without a recording device insight, is extremely helpful: She tells Vivian she doesn’t like Chase or Anna, but when we flashback to 2014, just after the Ibiza trip and Anna and Chase’s battle with Val in Paris (the events of episode two), it’s evident she’s lying. She was all in on Chase and his software, Wake, which she used to introduce him to investors all across town. And, while she first treated Anna as an assistant, she warmed up to her after Anna “let slip” that Chase and Wake were in serious financial trouble.

Why would Anna deliberately ruin Chase’s relationship with Nora in order to gain access to the coveted mentee position? So, what motivates Anna to do the things she does? In the end, it’s still a mystery that we’re unraveling throughout this series. But in this case, the answer is a mix of resentment toward Chase for keeping her in the dark about Wake’s financial struggles, his own background, his trip to Berlin, and so on; her own ambition around the Anna Delvey Foundation / social club, which she’s pushing full steam ahead with; and probably a little bit of rage at Nora’s repeated dismissal and errand-sending (though she also charges a ton of stuff on Nora’s credit cards in Whatever her exact mix of reasons, Anna gets what she wants, and it’s exciting to see her really start to delve into her devious ways – now we can see what Vivian means when she tells her Scriberia coworkers that Anna fascinates her. Back in the day, Nora takes Anna under her wing for a brief period of time, makes some critical introductions, and all of a sudden, the bigwigs who turned Anna and ADF down left and right when she originally pitched them are almost running up to get part in her foundation.

Everyone in this episode is faking it ’til they make it, and it’s hilarious to watch. To safeguard her good name and reputation, Nora is pretending she wasn’t taken in by Anna and Chase. Vivian takes charge of her reporting and, in a risky move, plays the best card she has at the moment: persuading a number of people (all of whom have opposing accounts of Anna) that speaking with her for the article is the only chance they’ll have to get their side of the story out there. In order to gain further money, Chase is fabricating portions of his past as well as the possible impending success of Wake. Anna, on the other hand… In the present, Anna is sure that she and Chase never worked together or helped one other, yet in the past, she begs him to remember how he promised to assist her with ADF. These two impostors may be made from the same cloth, but Anna ups the ante — if she’s a copy of Chase and his playbook, she’s a “gold-dipped fucking copy,” as she puts it. While this may be accurate at this point in the plot, Vivian is learning more about the show’s current, and things are beginning to seem a little different. Chase is staying in a hotel in Dubai and working for the sheikh, while Anna is imprisoned at Rikers Island. It’s possible that part of the gold dip rubbed off over time…

Before Times Anna meets with one of the bigwigs to sell ADF, and one of them asks, “Who the fuck is Anna Delvey and why should I care about her?” This episode also begins to answer the question, “Who the fuck is Anna Delvey and why should I care about her?” The Anna we witness in Nora and Chase’s interviews and memories is a smart young woman who knows how to plan her way up the corporate ladder, and she does so with more success than we saw in the first two episodes of the series. Anna is monetarily, directionally, and emotionally on the precarious ground at the start of this episode’s flashback (the breakdown she has when she learns Chase lied about Berlin bounces between unhinged and contrived). But by the end of it, she’s amassed an advisory team, has her eye on a historic and exorbitant location for ADF (thanks to Nora’s connections), upgraded her wardrobe (thanks to Nora’s credit cards) and positioned herself as such a formidable force that Nora and Val react as if she’s sent them a bomb when a package arrives and they realize it’s from her.

Finally, Vivian persuades Todd to “allow” her to look at some of his case files and evidence discovery, and when she shows Landon and Paul what she discovers, she is given a few more weeks to tell the story. She also purchases some underwear for Anna, though not from Bergdorf. Anna has a slight advantage! Vivian has a big win! Vivian’s husband, Jack, has a harder time setting up their baby’s nursery because of Vivian’s increasing Anna Delvey–a conspiracy wall. Because residences in New York City are small (unless you run in Anna’s circles), the nursery has to double as an evidence room on occasion. And there’s a place where you can FaceTime with Dubai. And there’s the storage room for stuffed peacocks.

32 Awesome Things To Do in Guangzhou