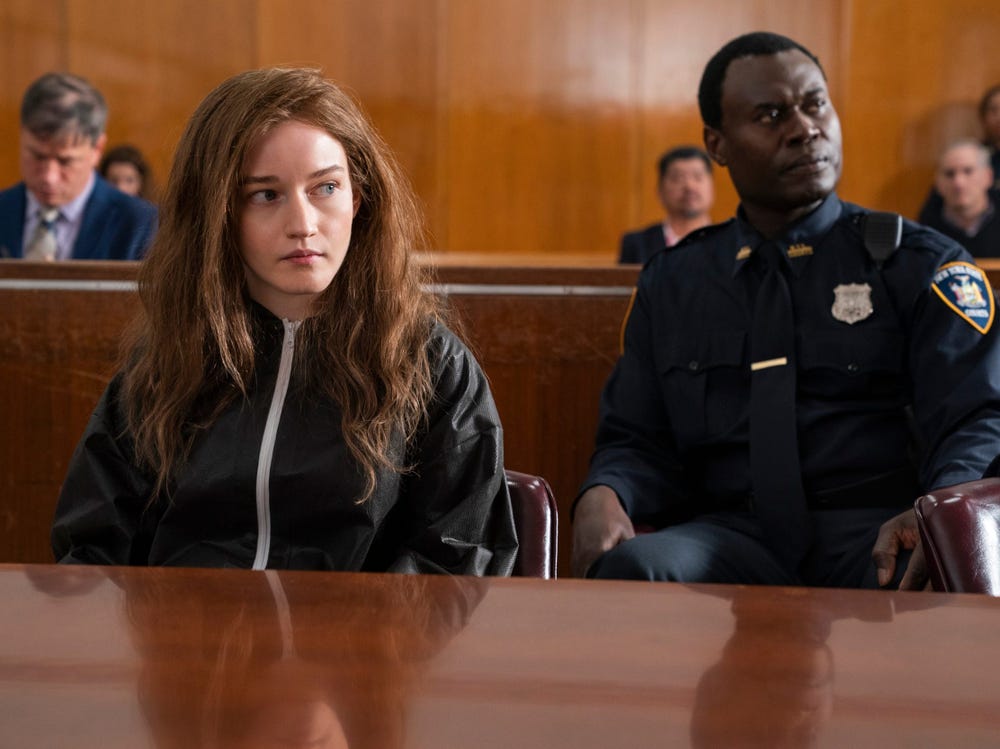 The “Inventing Anna” conclusion has arrived, and with it, Anna’s court date. What follows is a clumsy courtroom drama that closes up the storylines of crucial characters, complete with lots of fights, lots of fashion, and occasionally arguments about fashion.

The nitty-gritty details of Anna’s trial, as well as the many minutes the show spends on both Todd and Vivian’s personal life and reactions to the trial, don’t seem very important to go over here. What intrigues me more is how the episode brings together numerous strands and themes/questions that the program has been delving into throughout the season.

That’s what Anna did, for which she was convicted on eight of ten counts and sentenced to four to twelve years in prison. That’s how Vivian (and Scriberia – I adore you, Scriberia!) covered Anna’s tale and made her famous, just as she promised in episode one. There’s the story of how Vivian and Todd became interested in Anna, and how, despite the fact that their Anna Delvey connections will benefit them both professionally, none of it sits well with either of them. There’s how Anna’s friends react to the whole trial circus, and how, in the cases of Kacy and Neff, they’re able to care with some distance, moving on from the chaos/mess, and in Rachel’s case, she creates a book about her Anna tale.

Then there are the conflicting accounts of who Anna (Sorokin) Delvey is and what her intentions were in all of this, which is crucial in the legal setting. Catherine portrays Anna as a crafty con artist who misled and defrauded her friends, banks, and others. Todd, despite Anna’s wishes, creates a picture of Anna as a naive dreamer with enormous ambitions that never came near to materializing. He tries to persuade the jury that while they may criticize Anna Delvey for faking it till she made it, she never came close to stealing a single dollar from anyone. Meanwhile, Anna and Neff, with a little help from Vivian, are attempting to tell a story that upholds Anna’s brand through her courtroom wardrobe choices, an ordeal that has resulted in numerous courtroom delays, a great deal of media attention, and Vivian rummaging through her own closet in the middle of the night.

There’s also Anna’s reaction to the trial, to hearing all of these contradictory accounts about her. She’s as adamant as ever that SHE WAS TRYING TO BUILD SOMETHING, that her father will wire the funds for her trial stylist (a friend of Neff’s) and a new lawyer (when she tries to fire Todd), and that her reputation and brand are on the line — so she doesn’t want Todd portraying her as an amateur who never got close (even though that may be her best shot at avoiding conviction). She’d rather go to jail than be labeled a want to be, a “useless, stupid excuse for a scam artist,” as Todd describes her in a furious exchange. That is, after all, a decision. And it’s consistent with what we’ve learned about Anna thus far.

Julia Garner’s acting as the enigmatic Anna ensures that we don’t receive a clear explanation. Anna sticks to her guns, er, lies, verbally. She informs Todd after the verdict is read that the jury saw her… that she was dangerously close. And now the world will know that she is a player, not a ditzy socialite. However, she is sobbing on the floor while she says all of this. Even as she imagines herself strutting into the courtroom on the first day of trial, she is struck by how empty the room is – not only of the reporters but also of those who care about her, such as her father. She appears frightened in the courtroom, even as she rails at Todd about how his “in over her head” defense is ruining her reputation. Even as she reminds Vivian that their relationship was transactional and that Vivian fulfilled her part of the bargain by making her famous, she holds back tears and reaches out for one last handshake, inviting Vivian to come to visit her in Bedford.

Then, as she rides the bus to her new prison, she stares right into the camera, her face incomprehensible.

So, who is Anna Delvey, exactly? Is she a criminal mastermind or a naive, ambitious young woman who, like so many others before her, got caught up in the glitz, glamour, and grift of New York?

I’m no psychologist; I’m just your faithful TV recapper, but it appears like the show’s Anna Delvey is a con artist who may or may not has been in over her head, which might be lonely but also mean. It’s been a lot of fun watching Inventing Anna try to answer that question over the course of nine episodes, building a fictionalized case/story and examining the Anna Delvey story from various perspectives, including an unsympathetic and sympathetic one, as well as one that reminds us that Anna Delvey is just one example of the chronic scam culture we live in.

And what are we going to do with it? So, as the smart phrase goes, “where are they now?” If you’re Kacy or Neff, you move on with your life and your own ambitions, according to Instagram posts at the end of the episode. If you’re Rachel, you’ll try to market your Anna narrative. If you’re Todd, you become the go-to lawyer for con artists and also enjoy a family vacation every now and again. If you’re Vivian (or Jessica Pressler, Vivian’s inspiration and the reporter whose article inspired this entire episode), you’ll move on to the next story, much like journalists. If you’re Anna, you’ll be released from prison in 2021 and then detained by ICE for exceeding your visa’s validity.

If you’re like the rest of us, you’ll get to watch an entertaining show while also considering what it means to “fake it until you make it,” and why we seem to be so obsessed with scammer stories in the first place, to the point where articles become books, shows become podcasts, T-shirts, and so on. No big deal, just some lighter food for thought to round out these Inventing Anna recaps. Will you be available for Hulu’s Elizabeth Holmes show in March? Wink, wink.