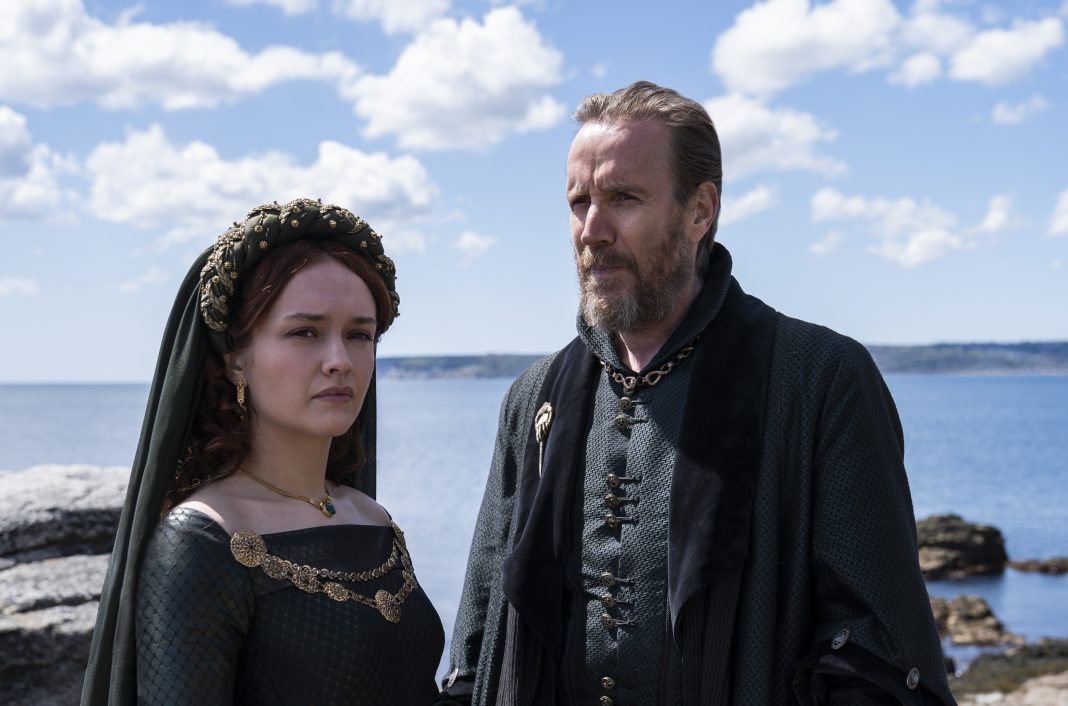 After seeing three photos that revealed “House of the Dragon” characters, we started thinking about their outfits and what they could say about upcoming tv shows characters. 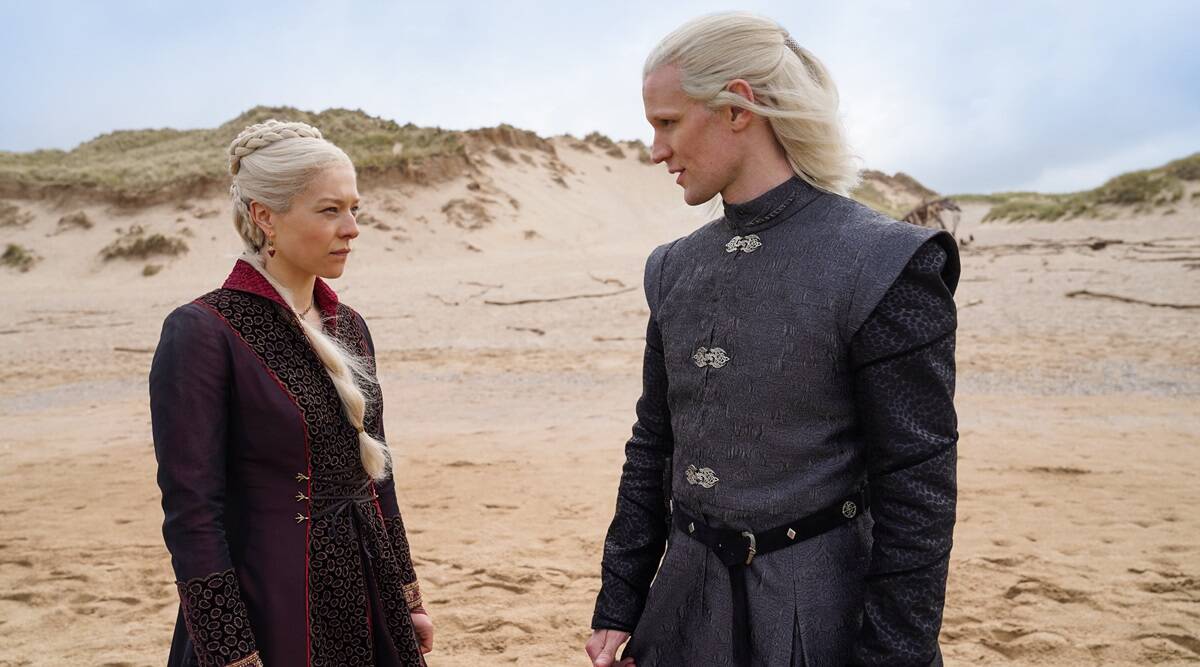 Princess Rhaenyra, daughter of Viserys I Targaryen, and Queen Aemma of House Arryn are on our right. Despite the fact that she is one of the few Targaryens who was not born through incest, she marries her uncle, Prince Daemon Targaryen, the blondie on our right. The two are immersed in conversation, maybe plotting an attack in the upcoming Dragon Dance encounter.

According to A Wiki of Ice and Fire, Rhaenyra is dressed in a fitted velvet gown in deep purple with tints of maroon and black, which is her hallmark. These hues connote richness, power, and elegance, all of which are necessary for the Iron Throne’s royals or other nobles in Westeros realm.

A detailed black and gold lace can be seen from her shoulder to the out-of-frame hem and on the cuffs of her sleeves, which she is known to have acquired frequently from Myr. Do the deformed circles on the lace resemble dragon scales, a hint to her past life as a dragon rider? Even the embellishments that hold her corset-style ties together seem like dragon claws, a nod to her surname.

We observe a strongly structured coat/vest on her uncle Daemon, which is a staple in Targaryen clothing. Has anyone ever noticed how their wardrobe is suggestive of armor on a regular basis? This can be attributed to the family’s lengthy reigning status and a show of authority. A fitted, shoulder-padded garment is called a power suit for nothing.

The neckline is held in place by decorative clasps that, dare I say, resemble dragons flapping their wings in flight. Is this a foreshadowing of the upcoming Battle of the Dragons? Only time (and HBO) will tell if this is true.

His paneled sleeves also have a subtly scaled design, which we can ascribe to his ancestors. What can I say, these people adore their dragons.

A black leather belt with metal accents adorns Prince Daemon’s hips. Both compass-looking and diamond-shaped components are stamped into the material in an alternating pattern. The same belt cinching The Sea Snake’s waist can be seen in our next photo… Is there any sort of link here? I’ll get to that later. 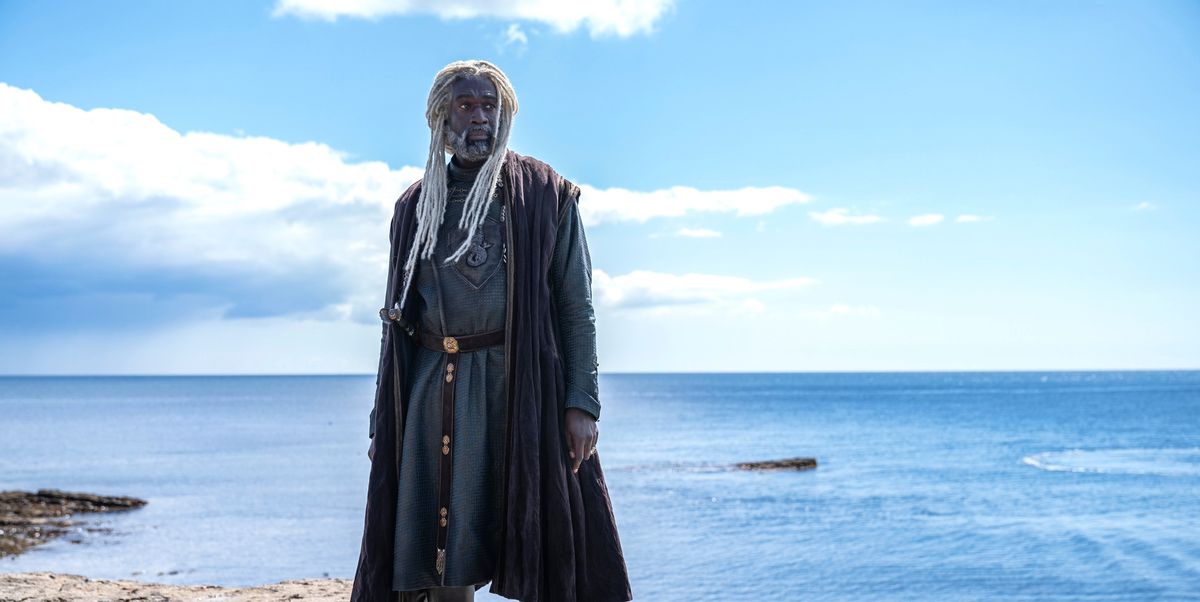 Corlys Velaryon, also known as the Sea Snake, is a well-known seafarer and adventurer in the Seven Kingdoms, renowned for his skill on the wide sea. He is married to Rhaenys Targaryen and has Targaryen family ties that I will leave to the show’s writers to explain (honestly because this family tree is crazy).

A sleeveless, flowing vest envelops the Sea Snake’s physique and grazes his shins. It’s fashioned of a thick textile, most likely to shield the wearer from the elements when on a maritime quest. His long-sleeved, mock-neck tunic appears to be constructed of a durable material painted in a dark bluish-green shade, probably alluding to his family crest’s rich turquoise color.

The unmistakable House Velaryon symbol is engraved onto the front of his shirt, proudly bearing his kingdom no matter what land (or sea) he occupied. The decoration is a scaled seahorse, which proudly represents the family’s seafaring abilities. His garment is likewise fastened at the waist with the same belt worn by Prince Daemon Targaryen in the previous portrait, showing their royal ties to the Targaryens.

A pair of leather boots that scale up and under the hems of our aquatic Hand’s clothing complete the look. The Sea Snake appears to be ready for war regardless of the weather (and a nice voyage at sea). 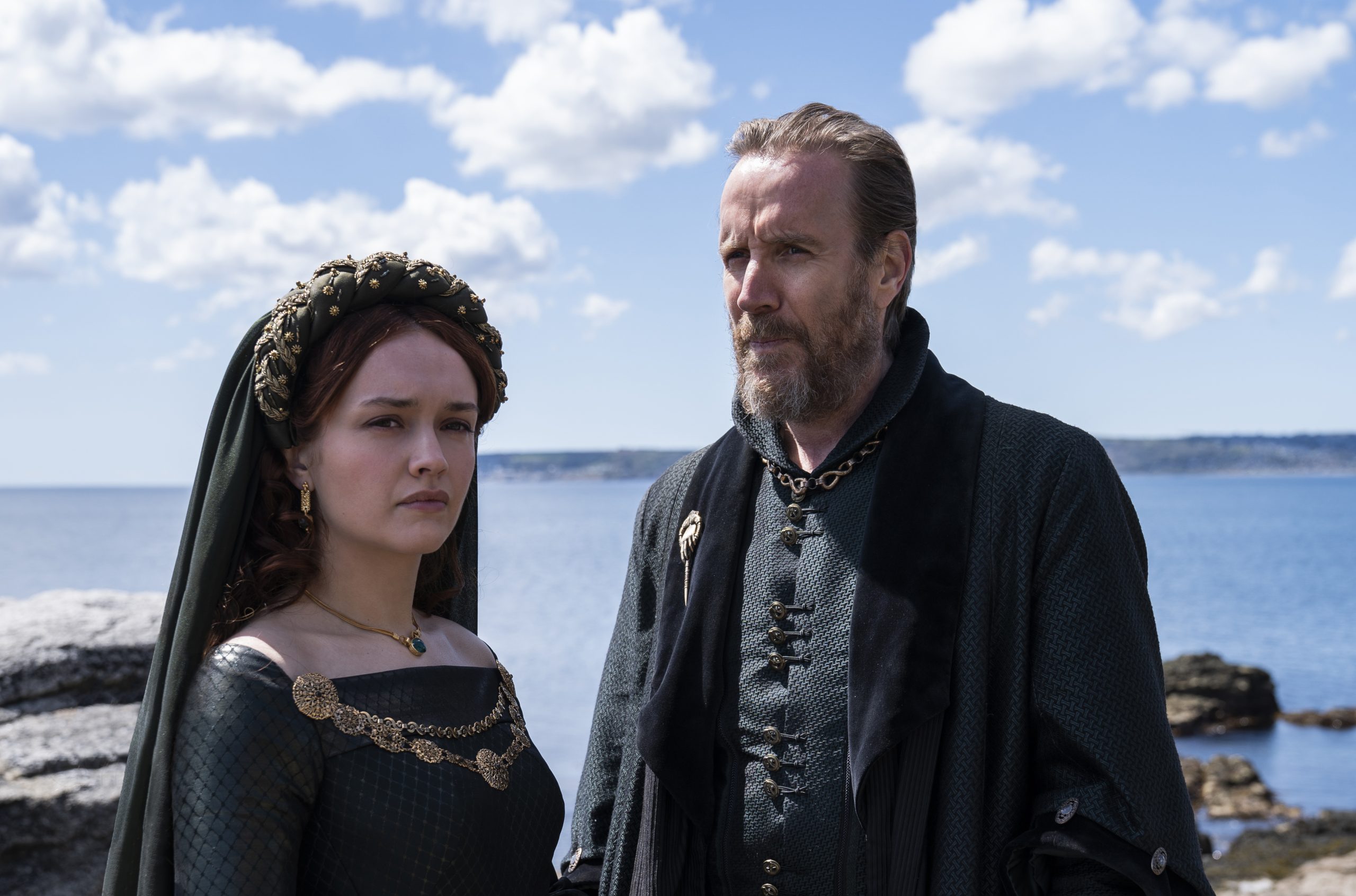 We see a calculating Queen Alicent Hightower with her father, Otto Hightower, in our most recent teaser photo posted by @houseofthedragonhbo.

King Viserys I Targaryen, a.k.a. Princess Rhaenyra’s father, married Alicent Hightower. She is Rhaenyra’s stepmother, and the two used to get along well. That is until Alicent started bearing offspring, or Iron Throne heirs. However, because Rhaenyra was Viserys I’s firstborn princess, she was still first in line after her father died. This wasn’t ideal for Alicent or her stepdaughter, who both desired control, but there was only enough room for one. Perfect set-up for the impending drama on this show!

When the dispute over who should ascend the kingdom, Rhaenyra’s or Alicent’s offspring, Otto Hightower, a devout father, was always on Alicent’s side. He is wearing the iconic Hand of the King/Queen pin in this frame, signifying that he is his daughter’s Hand at the time. I’m guessing there will be more on his narrative in the show.

Now, let’s return to the outfits. Queen Alicent wears a boat neckline gown with a crosshatched fabric that appears to be deep green. Her shoulders are linked by two golden chains with textured pendants. She then secures her brown hair with a beautiful emerald hat and a thick, green, and gold-braided headband. We have a style fit for a queen with hanging golden bar earrings and an emerald pendant necklace.

Otto is shown wearing a popped-collar tunic (or is it a top?), in addition to the gleaming Hand pin, he proudly wears. We’ll never know thanks to this crop) and a draped shawl in similar woven fabrics. He, too, dresses in Alicent’s deep green, which he contrasts with a midnight-blue velvety lapel. We can see a broad pattern of belligerent apparel among the males of Westeros in the classic Game of Thrones costumes.

His top is held together by strong pins arranged in three columns. Otto Hightower is wearing an exquisite, golden chain around his neck… or is it an adornment hidden beneath his higher collar? Nonetheless, style points.

Previous articleHow “House of the Dragon” Could Solve These “Game of Thrones” Mysteries?
Next article“The Thing About Pam” Adds Two New Cast Members