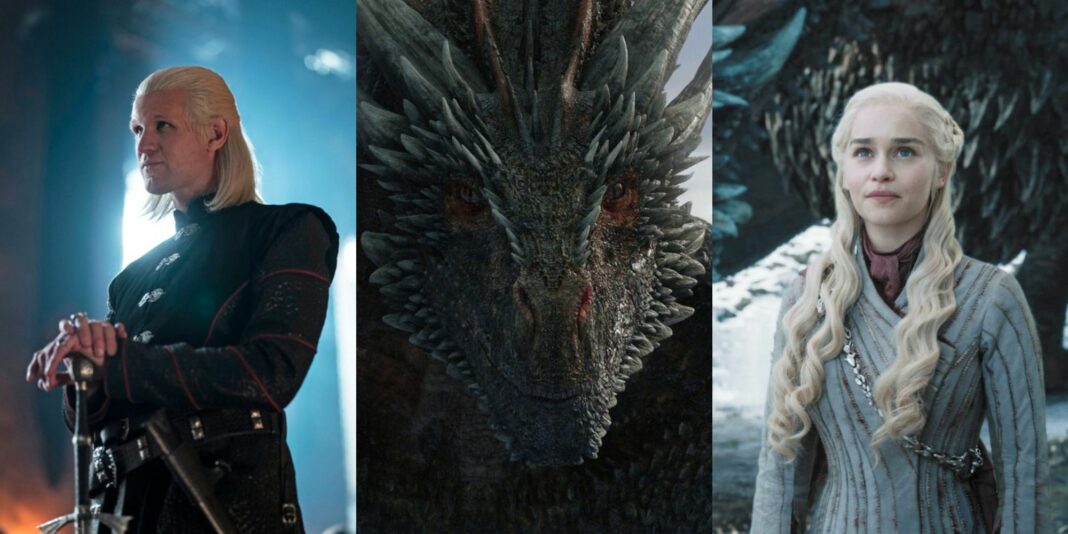 Although “House of the Dragon” is set before Game of Thrones, photos suggest that it may be evolving and contributing to the show’s narrative.

“House of the Dragon”‘s images suggest that it is retconning and refining portions of Game of Thrones’ lore. The Targaryen-centric spinoff “House of the Dragon”, created by George R.R. Martin and Ryan Condal, takes set nearly 200 years before the events of Game of Thrones. This is a completely different Westeros, with the House Targaryen dynasty in full swing, dragons soaring in the skies, and the Mad King, Aerys II Targaryen, wreaking havoc on their heritage from afar. That isn’t to say there won’t be some references to Game of Thrones.

While “House of the Dragon” is its own program with its own goals, it will still be connected to Game of Thrones. On a larger scale, there are dragons, Targaryens, the Iron Throne (which now resembles the novels, a terrifying, spiky towering throne), and the addition of other houses (Lannisters, Baratheons, and eventually Starks will all play their part). Those factors will undoubtedly alter the tone of Game of Thrones, particularly Daenerys Targaryen’s infamous “Mad Queen” conclusion, which may be better explained (or at the very least contextualized) if there are so many more Targaryens. It’ll also be in the finer details: “House of the Dragon” will undoubtedly contain several Game of Thrones Easter eggs, one of which has already been disclosed and sets up an intriguing retcon.

King Viserys Targaryen seems to carry the catspaw dagger, the Valyrian steel weapon used in the assassination attempt on Bran Stark’s life and subsequently used by Arya to slay the Night King, in one “House of the Dragon” painting. It’s a small but crucial part of Game of Thrones’ events, but there was previously no confirmation of who the dagger belonged to in the past; Fire & Blood, the book on which “House of the Dragon” is based, doesn’t specify this dagger as being owned by Viserys (or even present in the story), but it appears the show is retconning it into the narrative, which is a smart move for providing not only a link to Game of Thrones, but also a mirror of

The identical catspaw dagger appeared in the “House of the Dragon” teaser video in the hands of Allicent Hightower, Viserys’ second wife, who held it aloft and ran into court appearing extremely upset. In the novel, one of Allicent’s children, Aemond, gets his eye cut out by Lucerys, son of Allicent’s competitor and Viserys’ daughter, Rhaenyra Targaryen, when the rivalry that becomes the Targaryen Civil War known as the Dance of the Dragons is still in its infancy. The events simply mention it as a dagger, however “House of the Dragon” appears to be retconning it as the Valyrian steel catspaw dagger. That means the tale has a distinct arc, with Viserys sending the dagger to his grandson, Lucerys, who uses it against Aemond, and Allicent taking it to the court to demonstrate the wrongdoings of Rhaenyra’s children.

It’s an important component of the Dance of the Dragons’ build-up, and including the catspaw dagger in such a way provides for a logical connection to Game of Thrones, contributing to the show’s mythology without detracting from the tale. Indeed, “House of the Dragon”‘s usage of the Valyrian steel blade is a great nod to Game of Thrones. In Game of Thrones, the dagger passes from Littlefinger to the assassin (or at least, it’s highly hinted he hired him, but the novels point to Joffrey) to Catelyn, by means of an attempt on Bran’s life, much as it goes from Viserys to Lucerys to Allicent, by way of grave damage to Aemond. Later, it passes from Bran, the lad who would become King, to his sister Arya, in a similar passing of the dagger moment in preparing for a great event.

Arya uses the blade to murder Littlefinger even before slaying the Night King, demonstrating the dagger’s gory past and the sense of vengeance it carries, which “House of the Dragon” will be adding to. A comparable Valyrian steel dagger appears in a book Samwell Tarly reads at the Citadel in Game of Thrones season 7, setting up this retcon. That claimed the dagger had a considerably longer history, maybe extending back to the days of Aegon the Conqueror himself; while “House of the Dragon” may not prove this, it does appear to be adding to the tale of this weapon’s voyage.