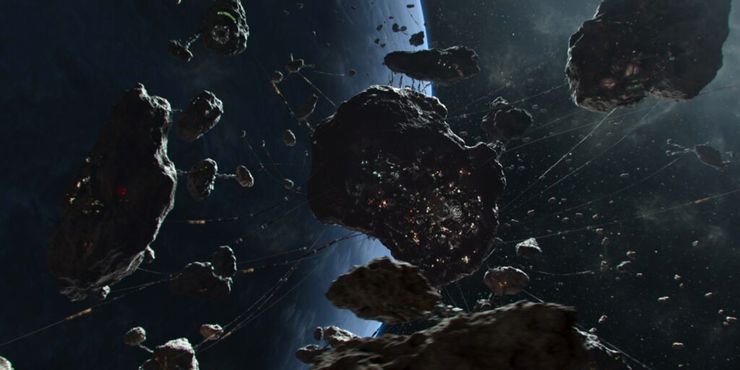 The Rubble, a safe place in the galaxy where anyone seeking sanctuary can live a free life away from the Covenant and the UNSC, is introduced in “Halo” episode 2. Master Chief sends Kwan Ha to The Rubble, the home of Soren-066, the only SPARTAN-II dropout and John-117’s friend, in an attempt to elude UNSC soldiers after he went rogue, refusing to murder Kwan while also keeping the Forerunner artifact in his possession. The Rubble has also been mentioned in tie-in books and comics, and it has its own history in the games’ timeline, which the current live-action series definitely draws influence from.

Master Chief and his SPARTAN unit Silver Team were entrusted in “Halo” Episode 1 with intercepting a Covenant attack on the Madrigal colony world. This is where John-117 met Kwan and discovered the Forerunner relic that the Covenant warriors had been looking for. Master Chief activated the gadget by touching it, which gave him visions—possibly his own fractured memories that Doctor Halsey and the SPARTAN program had deleted during his training. This is what drives Master Chief to violate orders, save Kwan’s life, and flee the UNSC to The Rubble, giving him time to learn more about his relationship to the artifact (revealed to be a Forerunner keystone).

The Rubble first appeared in Tobias S. Buckell’s Halo: The Cole Protocol as one of the few hidden regions in the galaxy that was not under the jurisdiction of the UNSC or the Covenant. However, the version in the new Halo series does not appear to be as intricate as the one in the novels, focusing instead on those attempting to avoid the UNSC’s notice. Here’s a look into The Rubble’s past and where it fits into the larger Halo universe.

In Halo’s Galaxy, Where Is The Rubble?

In the 23 Librae system, the Rubble is a group of asteroids. Madrigal, a colony world depicted in “Halo” Episode 1, and Hesiod, a gas giant, are also found within 23 Librae. The Rubble promised freedom among its many asteroids connected by a multitude of docking tubes, allowing its residents to travel back and forth to the markets and settlements that resided within the giant hollowed-out rocks floating through space. It was created by insurrectionists and rebels who had no love for the UNSC. When the Covenant glassed Madrigal in the novels, it also became a shelter for survivors (something which could happen down the line as the Halo series continues).

The Rubble was also home to a group of alien Kig-Yars, though they were not included in the live-action series (also known as Jackals). The humans of the Rubble and the Kig-Yar had formed an uneasy relationship centered on trade, despite their seeming hatred for the Covenant. This does not appear to be the case with the Silver Timeline version of The Rubble from the “Halo” series.

In Halo, What Happens To The Rubble?

The Rubble eventually fell to ruin and was destroyed after being discovered by both Covenant and UNSC forces, as depicted in the games and tie-in literature. Furthermore, it was revealed that the Kig-Yar faction on The Rubble was secretly under orders from the Covenant’s Prophet of Truth to figure out where Earth was located. They were also secretly assembling an army of Grunts on Hesiod’s adjacent moon, with the intention of someday betraying the humans that lived within the asteroid collection.

While the Kig-influence Yar’s does not appear to play a role in the “Halo” series, The Rubble becoming caught in the crossfire of “Halo’s” Human-Covenant War could play a role as the series progresses. While within the asteroid colony, Master Chief accidentally activated the Forerunner device, perhaps acting as a beacon for the Covenant to pursue. In any case, this is unlikely to be the final appearance of The Rubble in Paramount’s “Halo”, given that Master Chief left Kwan with Soren before returning to the UNSC.

Previous articleAfter The Update Players Can Now Pick Up Items Instantly In “Horizon Forbidden West”
Next articleWhy Is Halsey So Afraid in “Halo”: Master Chief Visions?