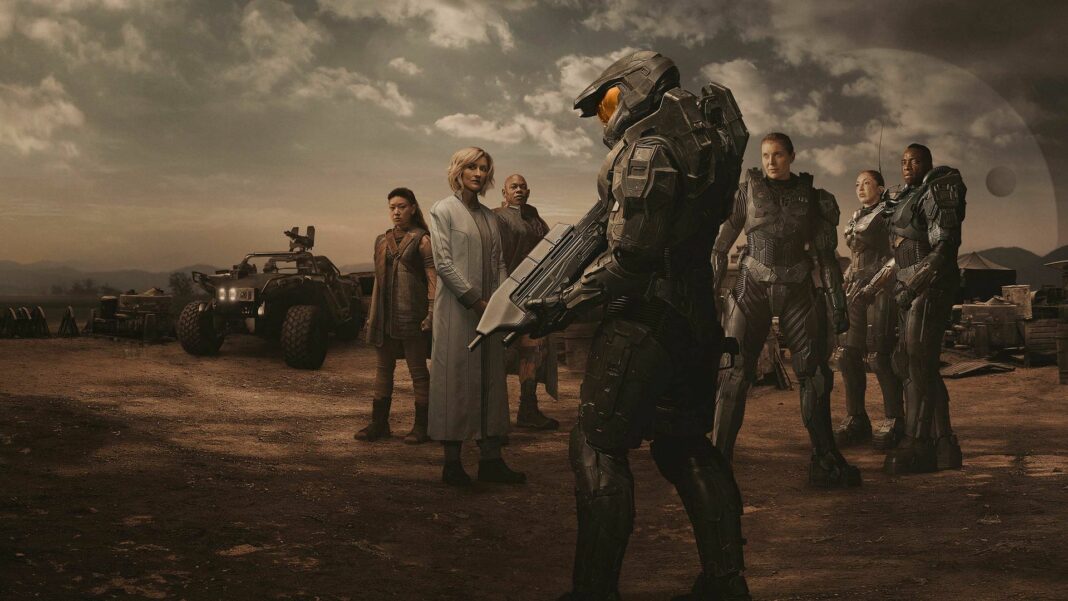 The primary human characters are highlighted in a recently released poster for Paramount+’s upcoming “Halo” TV show, combining Master Chief with his fellow Spartans. The series is based on the popular video game franchise created by Microsoft. Master Chief is played by Pablo Schreiber, and Jen Taylor reprises her role as the artificial intelligence Cortana from the games.

“Halo” is set in the 22nd century, and it depicts humanity occupying most of the Milky Way and expanding its power throughout the cosmos. All of this comes to an end, however, when the Covenant, a theocratic alien coalition, initiates a genocidal assault against humans in the name of their religion. When confronted with a massive, technologically advanced threat, humanity looks to the Spartan-II project, which produces extremely capable, powerful supersoldiers who are trained from an early age. One such soldier is John 117, a Spartan who will make a discovery that will forever change the galaxy. A new image for the series has been published, concentrating on the series’ human characters, following the release of an excellent series trailer in January.

The poster, which was released on Twitter as part of IGN’s FanFest event, shows Master Chief standing beside his human comrades. The poster shows Schreiber’s Master Chief standing in front of a Warthog attack vehicle and a UNSC encampment on an alien world. Young human civilian Kwan Ha (Yerin Ha), rogue Spartan Soren-066 (Bokime Woodbine), and renowned UNSC scientist and Spartan-II founder Dr. Catherine Halsey are all standing to his left (Natascha McElhone). The three Silver Team Spartans, Kai-125 (Kate Kennedy), Riz-028 (Natasha Culzak), and Vannak-134, are on the Chief’s right (Bentley Kalu). The poster also features the series logo below the Master Chief along with the March 24 release date. Take a look at the new image down below.

Check out this awesome, exclusive image from @HaloTheSeries ahead of its premiere on Paramount+ on March 24! #IGNFanFest pic.twitter.com/lo5nqFXy0b

The series promises to feature numerous nuances that fans of the video games would love, with producer Darryl Frank revealing several easter eggs. Despite the fact that the series is set in a “Silver timeline” that is independent of the games’ history, 343 Industries has assured that the events depicted in the series would be known to fans. The cast shares the same enthusiasm for “Halo’s” two decades of legend, with Schreiber claiming to be well-versed in the franchise’s history. Schreiber claimed he investigated the series’ long-running mythos in order to prepare for his role during a recent event where the cast and crew met to promote the show.

With the show officially renewed for a second season, fans can anticipate Master Chief to continue to instill optimism for humanity for some time to come. The cast and crew of the show have put in a tremendous effort to bring the world of Halo to life, as seen in the poster. However, crucial components of the series, such as the titular ringworld, have yet to be seen in any promotional material, suggesting that there are still more secrets to be unveiled.

Previous articleTo Get Fans Ready For the Release, “Elden Ring” Has Released a New Overview Trailer
Next articleIn Some Regions, “Elden Ring” Will Be Available On PC Before Console.