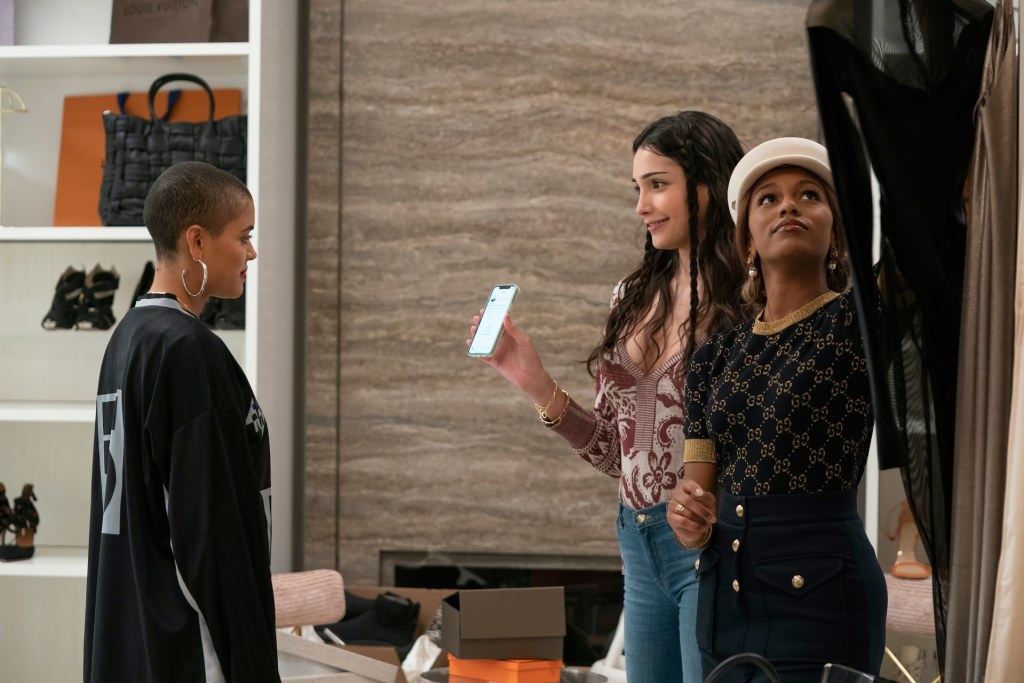 The showrunner of “Gossip Girl” discusses the dramatic season 1 finale. The tumultuous first season of HBO Max’s “Gossip Girl” revival came to an end after 12 episodes. The finale began with the pupils at Constance Billard reacting to the titular gossip peddler’s newest attempt to gain attention. In the final hour of the season, Monet (Savannah Lee Smith) appears to be making a move against Julien (Jordan Alexander), while Audrey (Emily Alyn Lind), Aki (Evan Mock), and Max (Thomas Doherty) agree to join an official throuple despite their reservations.

The most startling twist, however, occurs in the season 1 finale final scene. Julien proposes a truce after spending so much time attempting to figure out who the anonymous rumor poster is. She’ll tell “Gossip Girl” everything she knows, both true and false, while also trying to figure out who the anonymous internet poster is. Kate (Tavi Gevinson), who fans know is the actual “Gossip Girl”, evaluates the offer and accepts it. Fans have speculated on what this means for both Julien and Kate.

“Gossip Girl” showrunner Joshua Safran discussed the already-renewed “Gossip Girl” season 2 with Newsweek as part of a wide-ranging interview. The showrunner explained that the arrangement between Julien and Kate was a reflection of how Kate’s initial aim of keeping unruly kids in check had crumbled. Interestingly, Safran prefers to portray Julien’s actions in a positive light rather than as an example of the character betraying her friends, as some fans have speculated. The following is a quote from Safran.

“The season began with Kate having a mission statement and we see that mission statement kind of erode and be challenged. What was designed from the beginning with the writers was the idea that as Kate lost steam on this mission, Julien would slowly begin to see what that mission was and realize its merits. So they kind of switch places in a weird way. Moving forward, it’s Julien, the number one target for Gossip Girl that actually restarts Gossip Girl. So it was sort of just like that, full circle.”

In some ways, the most memorable sentence in the climax occurs during Kate and Julien’s truce. “No more kindness, it’s time for chaos,” Julien declares at one point. This could be interpreted as an admission of the criticism that the “Gossip Girl” reboot lacks the viciousness of the original, which has been made by both general viewers and professional critics. And, unfortunately, Kate, Julien, and other characters have dithered and worried about the ethics of their actions far too often and loudly throughout the season.

Many others thought the storytelling style was poor since it turned what should have been a lighthearted soap into an hour-long grind. It remains to be seen whether the reboot will be affected by the new dynamic. The series has some redeeming qualities, such as the potential to bring back famous supporting characters from the original “Gossip Girl”, but it has yet to stand out amid the plethora of shows geared at a younger demographic. The good news is that season two may provide an opportunity to start over.

Previous articleAmyrlin Seat From “The Wheel of Time” Is explained: Who Is The Leader Of The Aes Sedai?
Next articleHow The Absence of Returning Actors From “Lord of the Rings” Could Harm Amazon’s Show