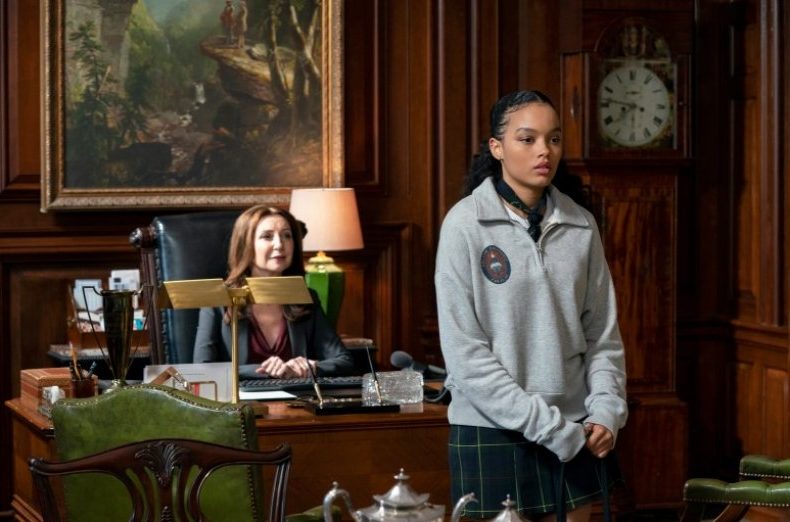 Julien’s cancellation this week continues to defy logic and fails to reflect how this situation would play out in real life. For one thing, the show’s portrayal of Julien’s celebrity is perplexing. As I mentioned earlier in the season, it’s difficult to tell Julien apart from the other kids at Constance Billard because no one appears to notice her except “Gossip Girl” (until in this episode when it’s revealed she has stans???). In any case, everyone’s sudden fixation with this “scandal” — which appears to be nothing more than a series of misunderstandings — appears strange.

Furthermore, I believe the authors are conflating extreme stan culture with the actions of normal-ass Gen-Zers who are concerned with things like homework and proposals. After “Gossip Girl” shares anything about Julien’s previous tweets, a whole gymnasium of students literally boos her in this episode. But, in the midst of the scandal, she manages to convince enough people to show up to a party, so who knows?

Apart from all of these plot holes, I simply believe there is a better, more true way to represent the level of social awareness (some but not all) that youngsters have these days as a result of social media without dismissing them all as mindless social-justice vigilantes. “Cancel culture” is depicted in a wide and comical manner. Yes, people express outrage over this type of nonsense on the internet (and it’s usually fleeting). But I promise you, not even the most self-righteous Twitter users are calling for Lily-Rose Depp to be nailed to the Cross for speaking out against Amber Heard’s charges against her father, or condemning Hailey Bieber for having an avid Woody Allen supporter for an uncle. But Julien manages to become the focus of everyone’s ire and loses all of her brand partnerships (when did she earn brand deals?). Julien and her friends are in full crisis mode again following the whole IG Live fiasco.

This episode even recycles a story hook from earlier in the season, in which Monet and Luna prepare a party to get the internet off her back, with all earnings going to charity. Please accept my apologies, but this is not Ariana Grande. I’m just not convinced that all of these public relations techniques are required for an influencer? Julien might issue an online apology statement mentioning her donations to Time’s Up or another women’s organization, similar to what Timothée Chalamet did after working with Allen and vying for the Oscar. However, these writers are subjecting us to yet another pointless party disaster because no one can come up with anything interesting for these characters to do other than check their phones and devise overly complicated strategies to get out of whatever insignificant problems they encounter on a daily basis. And, of course, it all culminates in a fight between Zoya and Julien.

I liked it a little more when Eleanor, Cyrus, and Dorota (and Dorota’s daughter) made special appearances at a Hanukkah meal that Audrey and her mother crashed in order to get some grant money for her design brand (because Eleanor is the head of the CFDA now). Were we aware that Catherine was a fashion designer? Every detail regarding these persons seems to be mentioned only once, and we last heard about her “business” in episode two. Aren’t they also in financial trouble? Audrey was meant to leave Constance Billard, wasn’t she? It’s pointless to ask these questions.

Audrey’s mother, on the other hand, crafts a plain coral dress that Audrey believes would be a best-seller. However, she makes the blunder of lending it to Julien at the absolute worst possible time. At the meal, Eleanor had a quick heart-to-heart with Catherine, telling her that she has to heal from the trauma she’s experienced before relaunching a business. Except for Margaret Colin’s absolutely soothing voice, which makes everything sound like the most compassionate message you’ve ever received, this speech might come across as very condescending. Everything else that happens at this minor dinner feels like a comedic diversion from Julien’s more serious plot and a chance to remind us that this show used to have interesting characters. There’s also more squabbling among Max’s parents.

This episode’s entire Julien segment caused me plot-motion sickness. Not to mention that by the conclusion of the show, her father has abandoned her (Luke Kirby, you’re free!) and her next big step is to delete her Instagram? Okay???

Keller, on the other hand, sets up a date with Scott in order to acquire access to the “Gossip Girl” account. Before she has to sleep with him — which I actually desire for Keller so she can calm down — she and Jordan take advantage of the opportunity to correct what “Gossip Girl” stated about Julien’s father’s actions by going into his phone and writing a new post. “Gossip Girl is done,” Scott says when she informs him. I realize it’s the show’s name, but as a fan, I’d be thrilled if this were true. Let’s simply toss this idea out the window and start afresh!

Finally, my beloved Aki is given this strange, isolated plot in which he has a random back-and-forth with a basketball player from a rival school during a game, which develops into some sort of mission to prove he’s a top? First and foremost, I’m not sold on Aki as a basketball player. Yes, skateboarding. Yes, cross-country. Shooting hoops, though, is not one of them. This show’s authors don’t understand that if there’s nothing exciting for them to do, it’s fine to leave them out of episodes. Of course, nothing on this show is genuinely entertaining, so it’s difficult to tell the difference. In any case, each episode feels like we’re seeing 50 separate people with 50 different story arcs. It’s a lot, especially for an ensemble show!