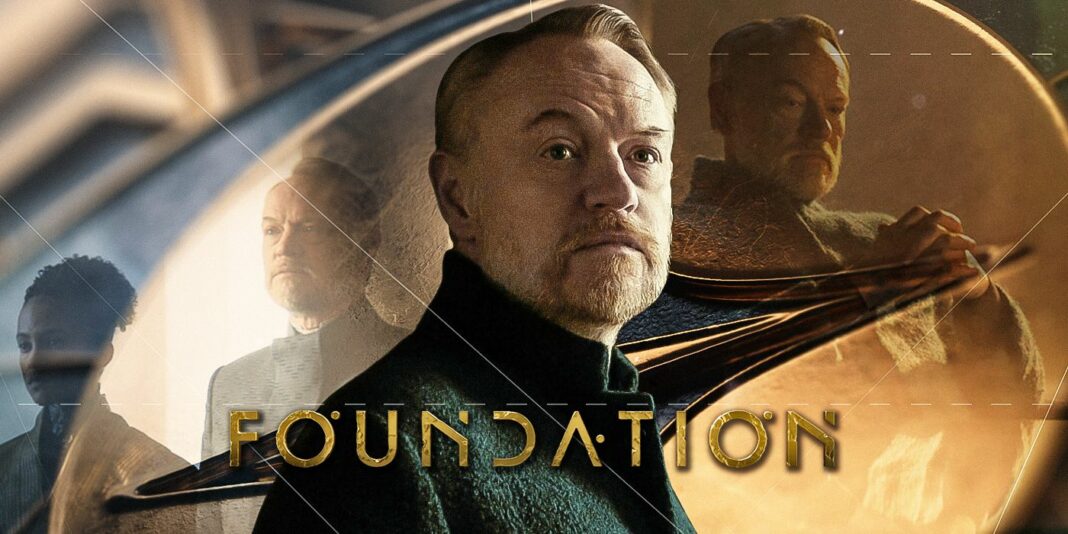 You don’t have to comprehend much of what happens in “Foundation” — and to be honest, I don’t — to figure out that Jared Harris’ character isn’t going to have it easy. The big, interplanetary adaptation of Isaac Asimov’s series of novels on AppleTV+ jumps between several timelines, but one of the most important ones centers on Harris’s character, Hari Seldon, a man who has developed a theory of “psychohistory” through which he can predict the movements of masses of people, and thus humanity’s future.

That fate comes to pass at the end of the show’s second episode, precisely as psychohistory must have foreseen. Harris is sent to his own little corner of the galaxy with his protégé, Gaal Dornick (Lou Llobell, who has to recite so many prime numbers in dialogue, bless her), and her love interest, played by Alfred Enoch, after pissing off the emperor of space (Lee Pace, sans belly button because he’s a clone) with his predictions.

Enoch tries to get away with murder (wink wink) by murdering Harris aboard the ship for unknown reasons, but Llobell intervenes. Enoch rushes her to an escape pod, accusing her of the crime and assuring that he loves her, leaving his intentions a mystery. Meanwhile, Jared Harris is no longer alive! He’s only done two episodes of his own show!

Jared Harris, once again, suffers a dreadful destiny on television. The guy’s luck continues to run out. Returning to Mad Men, there’s the sad Jared Harris character of Lane Pryce, who joins the advertising business in season three to inject some British stiff upper lip and dies by suicide in season five following a personal financial disaster. Then, on The Crown, Jared Harris dies as the ill King George VI, and on Carnival Row, where (I have not seen this, but spoilers! To be honest, there are spoilers for all Jared Harris roles from here on out!) He was allegedly suffocated with a pillow and had his liver removed.

Before Mad Men, he was a villain on Fringe who was sliced in half by a closing portal and then resurrected in an alternate universe in another season, only to be telekinetically crumbled to dust.

Even if Harris’ characters do not die on screen, they are always in pain. He’s the last man standing on a naval expedition on The Terror, which means he witnesses the terrible deaths of practically everyone around him. He has to witness the devastation of nuclear radiation and widespread government incompetence at Chernobyl. On The Expanse, he leads an insurgent force of asteroid belt residents whose lives are miserable because they are stuck in the asteroid belt. I’m not sure how his involvement in the upcoming British TV series The Beast Must Die will turn out, but considering the title…

Why does Jared Harris have to go through so much? What makes it so enjoyable for us to watch him struggle through life’s twists and turns, his soul lacerated at every turn? He has a naturally upper-class British manner, which allows him to be used as a metaphor for civilized values failing or devouring themselves from the inside in a variety of television shows. Whether it’s the coronation of Queen Elizabeth or the downfall of a galactic government, Jared Harris must die in order for a new generation to rise. Whether or not the British Empire or the sun exists in that TV show’s universe, you can imagine Jared Harris saying something like the sun setting on the British Empire.