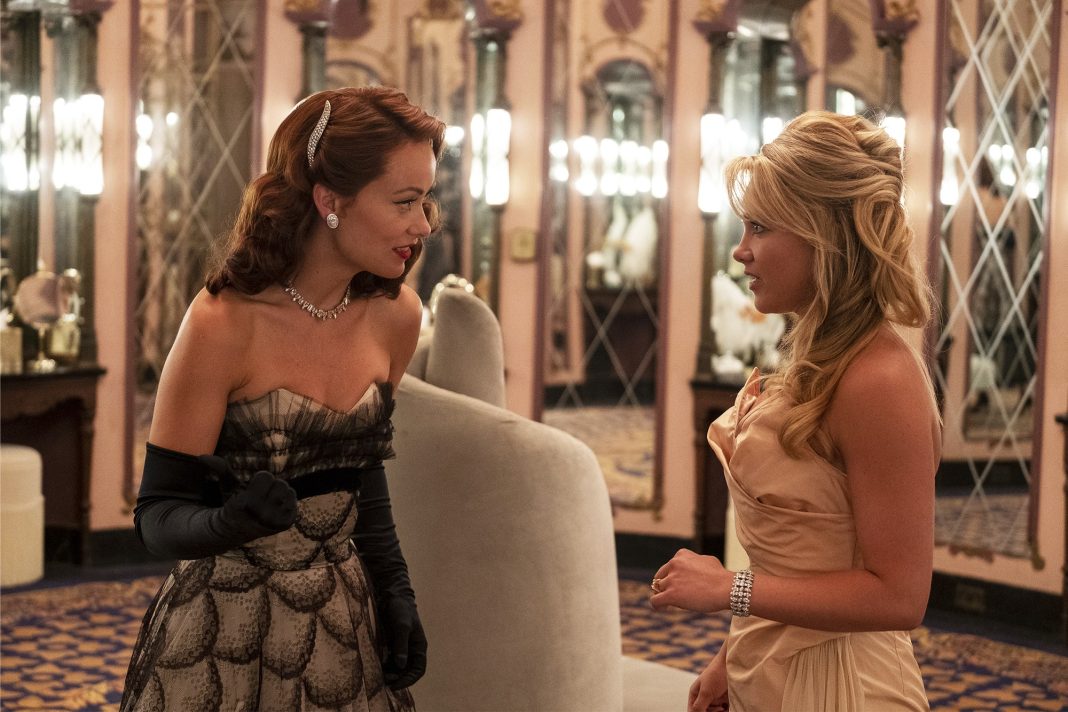 It’s been a while since we’ve had a film production and subsequent press tour as juicy and awkward as what’s gone down with Don’t Worry Darling. How did a stylish little thriller starring Florence Pugh, Harry Styles, and Chris Pine become…this? Starting with Shia LaBeouf being replaced by Styles early in production, followed by rumors of an on-set relationship between Styles and director Olivia Wilde, through Wilde being served with custody papers regarding her ongoing separation from Jason Sudeikis while on stage at CinemaCon, to further rumors of on-set tension between Wilde and Pugh. Leaked texts! “Miss Flo”! Conspicuous silence on Instagram! All of which culminated in a Venice world premiere featuring some of the most scrutinized body language of all time, and all of us sharing a mind-boggling collective moment wondering if a global pop superstar really did discreetly hock a loogie onto the lap of Jack Ryan: Shadow Recruit. (He didn’t.)

The Don’t Worry Darling drama is by no means unprecedented. The scandal-plagued film production is a phenomenon as old as the film industry itself, and one that comes with its own set of expectations. Depending on who’s talking, messy press tours like this have been said to be harbingers of catastrophic failure at the box office and “no such thing as bad press” free publicity. A quick tour through some of Hollywood’s most notoriously fascinating productions tells us that both—or neither!—can be true.

Perhaps the most notorious scandal-plagued movie set in history was 1963’s Cleopatra, which nearly ruined 20th Century Fox with its runaway budget, and melted down the rumor mill with Elizabeth Taylor and Richard Burton’s on-set affair, which ended both of their marriages. As Vanity Fair put it in a 1998 retrospective, “Never before had celebrity scandal pushed so far into global consciousness, with Taylor-Burton preempting John Glenn’s orbiting of the Earth on tabloid front pages, denunciations being sounded on the Senate floor, and even the Vatican newspaper publishing an ‘open letter’ that excoriated Taylor for ‘erotic vagrancy.’” Just sit with that for a moment.

But as much as Cleopatra became shorthand for a runaway production whose toxic press coverage presaged a box-office bomb, the truth is that—while it still ended up losing money due to its astronomical-for-the-time $44 million budget—Cleopatra actually performed at the box office. It was the number one earner for 1963, and a year after it was released, it entered the top 10 grossers of all time. The public fascination (and papal finger wag) had paid off.

Take, also, Brad Pitt and Angelina Jolie, whose movie Mr. & Mrs. Smith coincided with Pitt’s divorce from Jennifer Aniston. Pitt and Jolie stepped out as a couple only after the film premiered in June 2005. If you thought the public scrutiny ahead of the release would poison the box office, think again: Mr. & Mrs. Smith topped the box office in its debut week and ultimately hauled in $487 million worldwide, putting it in the top 10 in the domestic box office for the year. It was, at the time, both Pitt and Jolie’s best box-office showing to date, and remains Pitt’s number-two film of all time, after World War Z.

Part of the reason why many were worried that rumors might sink Mr. & Mrs. Smith is that romance rumors were said to be the culprit behind the failure of another thriller a few years before. In Proof of Life, Meg Ryan seeks out kidnap-and-ransom expert Russell Crowe for help after her husband has been taken hostage in South America. During the film’s production, Ryan and Crowe began an affair as Ryan’s decade-long marriage to Dennis Quaid ended. There was much hand-wringing in the media at the time, though it was more for what this affair might mean for Ryan’s image as “America’s sweetheart” after a string of successful rom-coms. In Entertainment Weekly, Gillian Flynn openly wondered whether a tryst with the “Richard Burtonish” Crowe would be good or bad for Proof of Life’s box office, and quoted no less a pop-culture luminary than Dr. Drew, who said he “had no interest in this film until I heard about all of this,” and predicted that audiences “will want to see if they can pick up on her falling in love with him on screen.”

Indeed, Kenneth Turan’s review in the Los Angeles Times outright said that watching for signs of real-life romance in Ryan and Crowe’s performances was far more compelling than the film itself. So, what was it, then? Did the scandal lead to Proof of Life’s middling box-office performance (it debuted in third place, behind the fourth weekend of Ron Howard’s How the Grinch Stole Christmas and the opening weekend of the Chris O’Donnell mountain-climbing flick Vertical Limit), or was the scandal the only reason anyone went to see it at all?

Oftentimes, perception is a more enduring metric than the numbers themselves. Tom Cruise’s 2005 press tour for Steven Spielberg’s War of the Worlds remains infamous not just for his appearance on The Oprah Winfrey Show where he jumped on the couch, but also for his newly unrestrained eagerness to discuss and promote Scientology, epitomized by a Today show interview where he accused Matt Lauer of being “glib” on the subject of psychiatric medication.

Cruise’s antics were the subject of much consternation in the mid-aughts. Viacom chairman Sumner Redstone blamed bad press for Mission: Impossible III disappointing at the box office—and had a hand in ending a production deal Cruise had with Paramount. More crucially, Spielberg himself appeared annoyed with Cruise for jeopardizing the War of the Worlds rollout. And yet that movie did incredibly well in the summer of 2005, topping $600 million worldwide and finishing in fourth place for all of 2005, behind a Star Wars movie, a Harry Potter movie, and the first Chronicles of Narnia. Sure, there have been bigger successes, but it’s safe to say Cruise’s press tour did more harm to the springs on the Oprah show’s couch than it did to War of the Worlds’ profits.

Which brings us back to Don’t Worry Darling and whether the rubbernecking about on-set friction and imagined movie-premiere spittle will torpedo its chances. History says it probably won’t. Mr. & Mrs. Smith, War of the Worlds, and Cleopatra all played out just as they would have without any whiff of controversy. As for Proof of Life, it was never going to compete with The Grinch over the kid-friendly winter holidays. The Don’t Worry Darling stories have been so scattershot and omnidirectional (as opposed to one direction?) that the overall narrative can’t be summed up simply. One thing is for sure: The movie is on America’s radar—for better, most likely, not worse.

‘Abbott Elementary’ Star Sheryl Lee Ralph Remembers Sidney Poitier at ‘Sidney’ Premiere: ‘He Did Not Let Me Down’